14 U of A clean energy projects receive funding boost

U of A spinoff that turns windows into solar panels among projects sharing more than $20 million from Alberta Innovates. 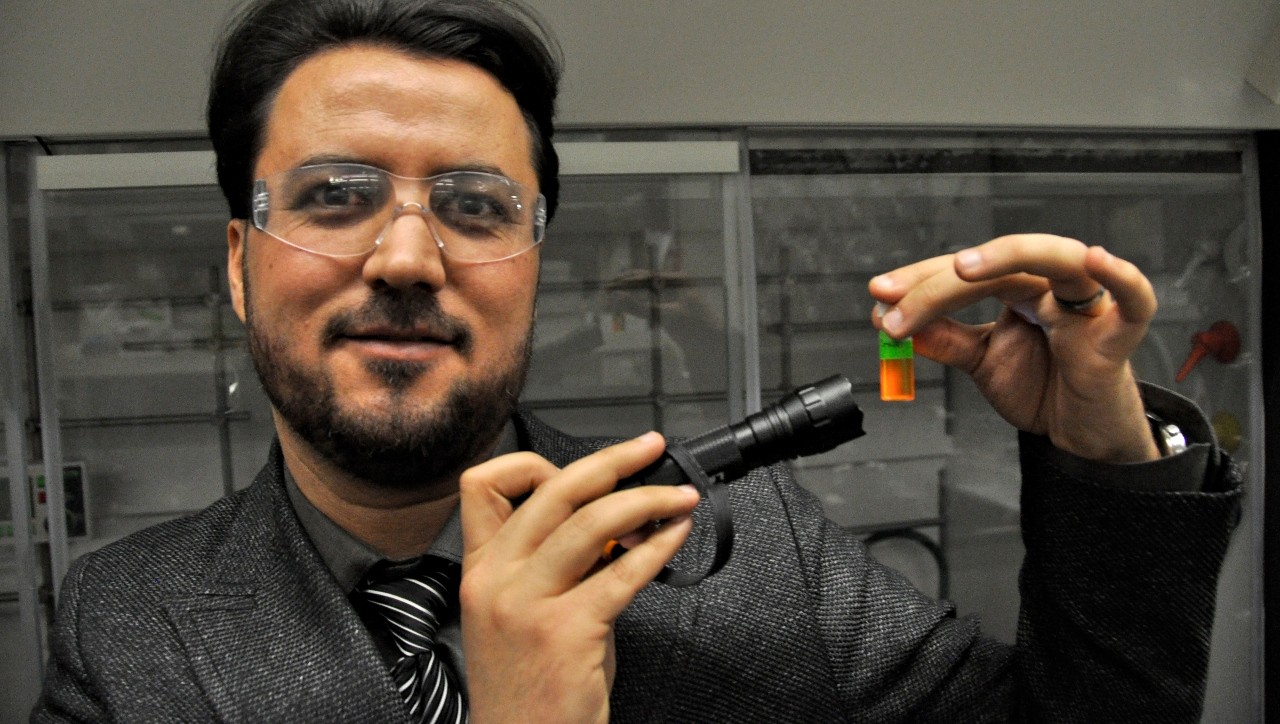 Morteza Javadi shines a flashlight on the silicon-based liquid film he is developing with U of A chemist Jonathan Veinot through the spinoff company Advanced Quantum Materials. The project was one of 29 across Alberta that received $20.4 million in new provincial funding. (Photo: Michael Brown)

Before coming to the University of Alberta from Iran in 2012 to pursue an education in nanotechnology, Morteza Javadi knew he loved chemistry but wasn’t sure how his education would help him beyond university.

Turns out he didn’t have to leave the university at all to begin his career in the private sector where he perfected a technology that is rewiring the thinking behind solar energy.

“I never thought that one day I’d graduate and just start an industry job,” said Javadi, who stepped into a career with U of A spinoff Applied Quantum Materials (AQM)—developing a silicon-based film that turns windows into solar panels—without switching lab benches.

Today, that lab bench located in Jonathan Veinot’s U of A chemistry lab was the centrepiece of a funding announcement from Alberta Innovates. AQM was one of 14 U of A-led projects that received a share of the $20.4 million allocated to 29 projects across Alberta through the Climate Change Innovation Technology Framework – Clean Technology Development program.

“When the world thinks of new and better ways to produce energy, we want them to think of Alberta,” said Deron Bilous, Alberta minister of economic development and trade, who was on hand for the announcement.

Although the idea behind luminescent solar concentrators is not new, the use of silicon nanomaterials and technology developed at the U of A is.

CEO David Antoniuk, a U of A alumnus who co-founded the company with Veinot three years ago, said while there are a handful of outfits racing to get similar offerings to market, AQM’s use of silicon nanomaterials has the advantages of being durable and relatively inexpensive.

He added the product, which is still two to three years away from being available on the market, has the potential to revolutionize urban architecture by turning windows into power sources and converting the passive facades of urban buildings into distributed energy generation units, while simultaneously reducing the heat gain of the building.

“This funding will allow us to move from proof of principle into commercial scale,” said Antoniuk. “Working closely with our partners, All Weather Windows and PCL Construction, we hope to demonstrate that our technology will revolutionize the building industry.”

Walter Dixon, the U of A’s associate vice-president of research, added the projects being funded through the Clean Technology Development Program “will develop new, transformative clean energy technologies to help the drive the new energy transition and contribute to a more sustainable and innovative Alberta.”

Yang Liu, Engineering
Process Development for the Cannabis Waste Management: On the Way to Sustainable Waste Disposal and Bioenergy Production

CORRECTION: A previous version of this story incorrectly stated the number of U of A-led projects. We regret the error.

14 U of A clean energy projects receive funding boost