Mistrust, fear and rumours helped the virus spread, but training trusted local leaders helped stop it, U of A researchers find. 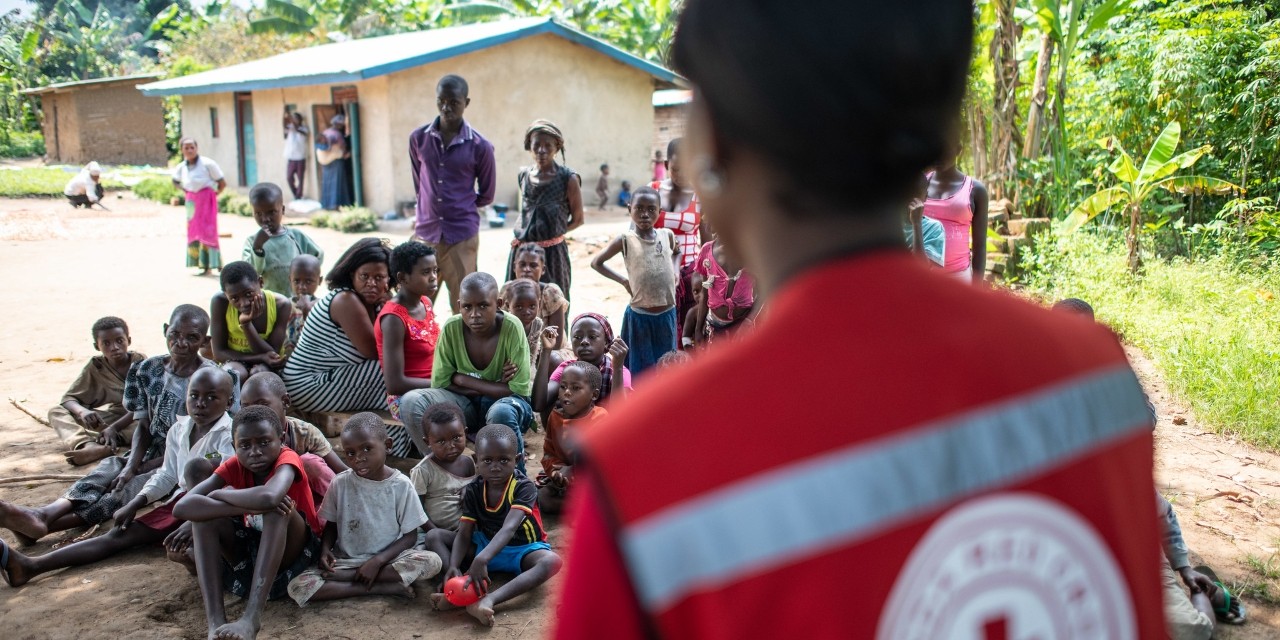 A Red Cross volunteer educates members of her community about handwashing to help prevent Ebola. People in the Democratic Republic of Congo were more likely to trust public health information about the disease when it came from local experts, according to a new study by U of A researchers. (Photo: UK Department for International Development, CC BY-NC-ND 2.0)

Multiple factors led people in the Democratic Republic of Congo (DRC) to resist public health messages during the 2018 outbreak of Ebola virus, and University of Alberta researchers fear the situation could be repeated with COVID-19 unless lessons are learned from the earlier epidemic.

“Mistrust, fear and rumours were complete obstacles to the efforts of the Ebola response team,” said Claude Kasereka, a surgeon from DRC who is doing his PhD in epidemiology in the U of A’s School of Public Health.

“The resistance was both passive—for example, widespread reticence to bring affected family members for treatment—and active, where there were violent confrontations between the population and response teams,” said his supervisor Michael Hawkes, associate professor of pediatrics and Stollery Science Lab Distinguished Researcher.

In newly published research, Kasereka and Hawkes suggest that simple public health messages delivered in the local language by trusted local experts such as medical students can be effective in building public trust and gaining co-operation.

The researchers did interviews and focus groups with 650 people in the Butembo region of northeast Congo immediately following the declaration of the Ebola outbreak in August 2018. Questions were asked in both Swahili and Kinande, the most prevalent local languages.

“At first, people didn't believe that Ebola was a real disease,” said Kasereka. “People thought that it was a fabrication from other nations.”

“We decided to try to understand the reasons for this social resistance.”

They learned that 72 per cent of those surveyed didn’t trust the Ebola response teams, 15 per cent intended to disobey public health orders in the event of a family member getting sick or dying, and 12 per cent did not believe the disease existed in the area.

The 2018 Ebola outbreak in DRC eventually grew into the second largest ever, killing more than 2,000 people by April 2020, according to the World Health Organization.

The researchers found that the arrival of foreign aid and English- or French-speaking medical professionals to help with the epidemic made local community members suspicious.

“The population is mistrustful after decades of civil war,” said Hawkes. “They feel abandoned by the international community because they’d been suffering under violent conflict for a couple of decades and no one had come to their aid.

“Now a virus threatens to spill across the border and all of a sudden you’re interested?”

Another driver for the resistance to seeking treatment was the high mortality rate of Ebola, which Kasereka pegged at 50 per cent.

“If your family member was infected with Ebola, he would go to a special unit called an Ebola treatment centre and you would most likely never see him again because he would just die,” Kasereka said.

Under usual circumstances, Congolese families almost move into the hospital to help take care of a sick relative. But in the Ebola treatment centres, no visitors were allowed. Patients were unable to recognize their caregivers because they wore face coverings and other protective equipment.

Kasereka explained there was a clash of cultures over burial rituals as well.

“When someone dies in my culture, the body will be taken from the hospital to his house,” he said. “People will spend the night mourning with the body. They will wash the body and cry while touching the body.

“With Ebola, everything changed,” he said. “When someone dies, if you are lucky you will be allowed to see the body from afar, and then the burial is carried out by a medically trained team for safety.”

The Congolese government tried to recruit local armed groups in the region to help deliver the Ebola response team’s messages, but the strategy backfired.

“It didn’t work because there were so many different groups,” he said. “Today you recruit one, and tomorrow there is another group coming in. There was no central co-ordination.”

Instead, some of the armed groups turned against the health-care teams, killing personnel and burning down clinics.

The lack of accessible and reliable news sources allowed for rumours to spread, the researchers learned. For example, they were told that the epidemic was triggered by a woman who ate her cat, developed bleeding symptoms and then bewitched family members, thus spreading the disease.

The researchers shared their early findings with the local government in November 2018 and implemented a new strategy to deliver public health messages about Ebola.

Six hundred medical students were deployed to reach out to 10,000 residents with simple messages such as “Ebola exists in Butembo” and “Bring infected family members to the Ebola treatment unit.”

“We saw that response to an outbreak should begin and end at the community level,” Kasereka said. “Training local leaders was much more effective for communicating the message than using untrusted outsiders.”

He drew a parallel with family doctors in Canada.

“Can you imagine if during an outbreak, your family physician was removed and replaced by someone that you don’t know and can’t talk to because of a language barrier?” he asked.

Hawkes said although the Congolese and Canadian societies are very different, he sees some parallels in the way public health messages are judged, especially in light of the new COVID-19 pandemic.

“Disorganized and conflicting messages from polarized political leadership leads to population mistrust of public health messages,” he said. “And they have to be tailored to local understanding.”

Both researchers worry the same conditions that led to resistance to Ebola treatment may apply to COVID-19 in DRC, with lethal consequences.

“People believe more in what they are getting from social media, and when you look at that content, most of it is not there to help,” he said. “It might again increase social resistance.

“The scars from Ebola virus disease are still there,” he said. “To add COVID on top of that would be a disaster. We are not ready to deal with it.”

The research projects were funded by the Association for Health Innovation in Africa and the Stollery Children’s Hospital Foundation through the Women and Children’s Health Research Institute.