$2.3-million space opens in downtown Edmonton for U of A spinoff health companies 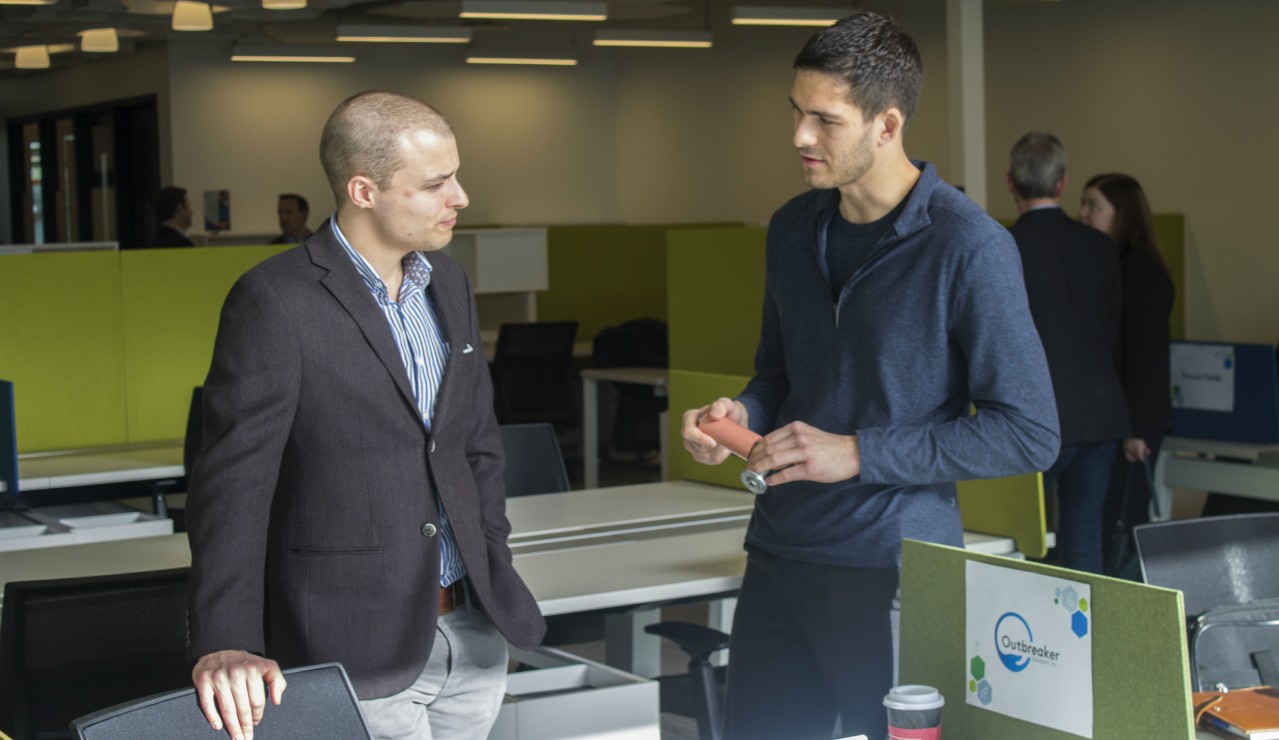 Brayden Whitlock (left), a PhD candidate at the U of A and research director of Outbreaker Solutions, speaks with the company's operations and finance director, Matt Hodgson, at today's grand opening of the TEC Centre Labs. The $2.3-million space is home to two business accelerators aimed at speeding health innovations globally and locally. (Photo: Ross Neitz)

Five years after taking his first steps into the world of entrepreneurship, Brayden Whitlock no longer has any illusions about the effort needed to be successful.

“The idea is only 10 per cent of a good business,” said Whitlock, a PhD candidate in the Department of Physiology at the University of Alberta.

“There are so many great ideas out there, but unless you can get through the hurdles, it’s not going to matter.”

Whitlock is one of the founders of Outbreaker Solutions, a venture that was formed after a chance meeting with inventor Doug Olson in an Edmonton sports store in 2013. The idea was simple yet ingenious: use compressed salt to produce antimicrobial fixtures, such as doorknobs, bed rails and toilet handles, as a means to prevent the spread of pathogens that cause sickness.

In the years since the initial meeting, the company has produced several prototypes and proven their product kills between 95 and 99 per cent of common germs like E. coli and salmonella in just one minute. It’s also proven to be effective against the spread of drug-resistant superbugs. Despite the promise of the product, it hasn’t made it to market yet.

“It's tough,” he said. “How many people can, or are willing to, just grind it out for a few years on zero budget and zero resources to try and prove the concept to attract the first financing or research partnership?”

It’s a common problem for many up-and-coming health entrepreneurs trying to establish their business.

But now, a new service will be available to companies born out of U of A ideas and expertise thanks to the opening of the $2.3-million TEC Centre Labs. The downtown space is home to two accelerator programs—the UAlberta Health Accelerator and the Merck Invention Accelerator.

“As our scientists and learners make discoveries that have value in the health-care system, we have to move those out of the laboratories and into human use,” said Richard Fedorak, dean of the U of A’s Faculty of Medicine & Dentistry. “Rather than taking researchers who have made a fabulous discovery, celebrating them and sending them back to their lab, we want to move their intellectual property and their spin-out companies into an area where they can blossom and grow. The UAlberta Health Accelerator within TEC Centre Labs is the landscape for that opportunity.”

Located in downtown Edmonton’s Enterprise Square, with nearly 8,000 square feet of wet lab and collaboration space for health technology companies and entrepreneurs, TEC Edmonton’s TEC Centre Labs is a hub of innovation for the accelerator programs it hosts.

The Merck Invention Accelerator will focus on advancing emerging health technologies to save and improve lives globally while the UAlberta Health Accelerator will be driven by research at the Faculty of Medicine & Dentistry.

The UAlberta Health Accelerator will support and inspire health-sciences innovators with a stream of programming for faculty members to identify and advance early-stage commercial opportunities, plus a student stream to train the next generation of entrepreneurs.

“I think our researchers and trainees are going to love being downtown in this vibrant collision space to connect with other like-minded people,” said Deborah James, executive director of innovation for the Faculty of Medicine & Dentistry. “It’s a piece to a bigger picture of instilling a culture of innovation within the faculty.”

“Each year, our faculty invests $300 million in research and discovery,” said Fedorak. “The health accelerator marks that investment going full circle. So not only do the people of Alberta and Canada invest in our research, but we are giving back by taking that research, publishing on it and then moving it into the health-care system.

The UAlberta Health Accelerator will house a cohort of 13 U of A spinoff companies during its first round of intake. The space will be given free to the companies for one year and will put them in close proximity to other health-centred businesses that are further along in their development.

For Whitlock, the opportunity means Outbreaker Solutions will have a place to call home as it makes a push toward commercialization.

“It opens doors that you don’t think are closed,” he said. “We’re very happy to have these basic resources that other, more established companies take for granted. But I’m even more excited to meet people who have the same mindset, who have overcome the same struggles, who have roughly the same end goal and just share stories and strategies with them. Sometimes if our team has a deficiency in one area of expertise and we can trade expertise with another team, I think it will save a lot of resources. It's going to increase efficiency a lot.”

Over the next year, Outbreaker Solutions hopes to use the space to grow the team and navigate the regulatory challenges it faces in getting its product to market. The goal is to have its antimicrobial fixtures manufactured in Alberta and available across North America over the next year or two.

Whitlock hopes the UAlberta Health Accelerator at TEC Centre Labs will be a key piece of the puzzle that helps the company get there.

“We think we're going to be able to build a business that is 100 per cent Canadian, serving North America, and helping to solve one of the world's biggest problems,” said Whitlock. “It's been five years of slow and steady improvement, so we are excited over the next couple of years to see it through to fruition.”

$2.3-million space opens in downtown Edmonton for U of A spinoff health companies