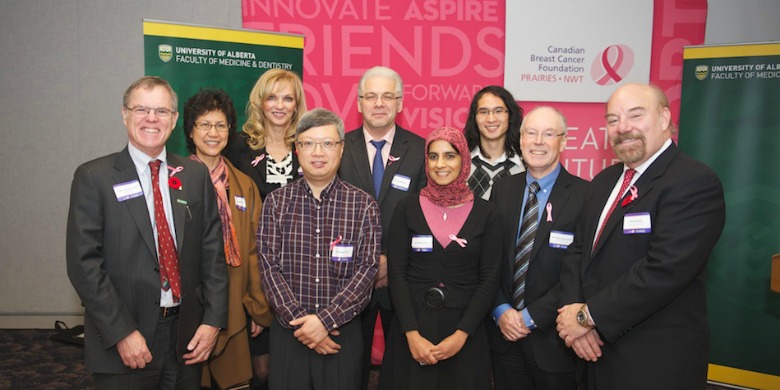 His mother was a breast cancer survivor. “She lived for nearly 30 years following her diagnosis and treatment. In the later stages of her life she started to experience significant secondary complications,” Ferguson-Pell recounted as he recently spoke at an announcement of just over $2.5 million in grants from the Prairies/NWT region of the Canadian Breast Cancer Foundation to the University of Alberta.

Being able to retain her independence and quality of life became the most critical issue for her during that period of her disease, he noted. “The things that we can do through research, development, improvements in care that result in a really good quality of life for someone in those later stages of their life … this is an important goal for what we do in a holistic approach to managing breast cancer.”

Six of the seven 2012 grants are for projects in the Faculty of Medicine & Dentistry, where the recipients are working to increase basic understanding of breast cancer, and improve its diagnosis or treatment. The foundation is also funding a pilot project in the Faculty of Nursing to support male partners of women with breast cancer.

Judith Hugh, a pathologist in the Faculty of Medicine & Dentistry and holder of the Lilian McCullough Breast Cancer Research Chair, received one of the largest grants—a one-time “investment grant” of $965,000. She is working on a better diagnostic test that can distinguish between the two types of tumours that thrive on estrogen, which together account for three-quarters of all breast cancers.

It’s crucial to be able to determine which form of estrogen-based cancer the patient has in order to choose the appropriate treatment, because one type requires chemotherapy and the other responds to hormone therapy. “This is a problem that needs solving right now,” Hugh said.

Six other researchers at the U of A received CBCF 2012 grants:

Martin Kratz, chair of the CBCF Prairies/NWT regional board of directors, said the relationship between the foundation and the university is long-standing. “Time and again we have invested funds into the bright minds at the University of Alberta, into a proven institution with a world-class reputation.”

As well as funding research, the foundation offers support to improve quality of life for those living with breast cancer, and focuses on education and awareness initiatives.

Breast cancer is a complex disease that will affect one in nine Canadian women during their lifetime. An estimated 22,700 women and 200 men in Canada will be diagnosed with breast cancer in 2012 alone.