Indspire, CIBC help create awards for 36 Indigenous students at the University of Alberta. 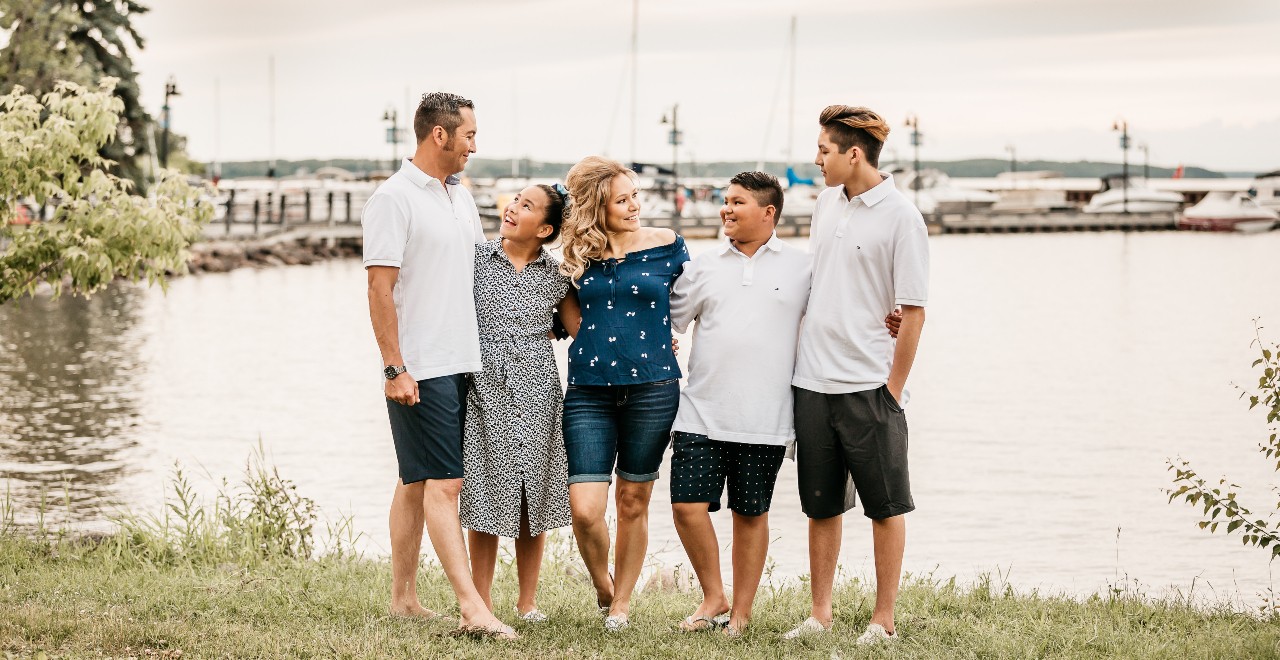 The U of A’s Aboriginal Teacher Education Program allowed Carmen Poitras (centre) to earn her education degree while remaining in Cold Lake, Alta., with her family. A financial award made possible by gifts from CIBC and Indspire helped her focus on school instead of financial stress. (Photo: Alina Joy Photography)

Carmen Poitras always knew she could make a difference as a teacher—it was getting the degree that seemed unlikely. At 39, she had three young children and two jobs in Cold Lake. She was sure she couldn’t go back to school. That is, until school came to her.

A colleague suggested she apply to the University of Alberta’s Aboriginal Teacher Education Program, which allows students to earn an education degree while remaining in their communities. She applied and was accepted to the Cold Lake cohort. Although she was excited about the program, she was worried about finances. That’s when Poitras heard about financial assistance for Indigenous students made possible through CIBC and Indspire, a national charity that supports education for Indigenous students.

Indspire has matched a $500,000 gift from CIBC plus other commitments to create awards for Indigenous students at the U of A. Poitras is one of 36 Indigenous students receiving funds thanks to this new partnership that totals $2.9 million in support.

“Indspire and CIBC’s generous gifts to the University of Alberta will help to change lives,” said Bill Flanagan, president and vice-chancellor of the U of A, in announcing the partnership. “Because of their commitment to Indigenous students, 36 future leaders will receive the support they need to see their studies through to graduation.

“This is an important investment in a vision we all share—an equitable society in which Indigenous voices are heard at every level,” said Flanagan. “This gift will help build the momentum needed to create equity in health care, business, education, policy and other areas of society.”

For Indigenous youth, lack of access to financial aid is the most significant barrier to further education after high school. According to the Canadian Federation of Students, more than 18,000 Indigenous people across Canada did not receive funding for post-secondary education from 2006 to 2011, because the demand outstrips the available funds in the federal government’s support program for Indigenous students.

“The National Truth and Reconciliation Commission recognized the great power of education to address the many challenges faced by Indigenous communities. The University of Alberta is deeply committed to the TRC’s Calls to Action, and partnerships such as this one are critical levers to support the educational goals of Indigenous Peoples. Education is the single most effective means by which the systems that continue to disadvantage can be addressed and the contributions of Indigenous Peoples honoured,” said Florence Glanfield, vice-provost of Indigenous programming and research at the U of A.

CIBC has long worked with the U of A on other initiatives. It was their introduction to the team at Indspire that created the opportunity for the matching gift.

“By empowering students to plan their futures, we support the next generation of strong Indigenous leaders. Together with the University of Alberta and Indspire, we will be able to broaden the reach of these opportunities to make a long-lasting impact in communities across the province,” said Per Humle, CIBC senior vice-president and region head for Alberta and Central Canada.

With this contribution, donors are investing in an area that has the potential to transform not only the lives of individuals, but also their families and communities, said Roberta Jamieson, president and CEO of Indspire.

“This partnership is a significant step in supporting First Nations, Inuit and Métis students to achieve their potential through education and training so they can in turn enrich their communities and create positive change in Canada,” said Jamieson.

Poitras recognizes the opportunity to be a role model in her own community—and to her children: daughter Jarris (10 years old), Kingston (11) and Blaize (16). With the financial support she received, she has wrapped up her student teaching at LeGoff School on the Cold Lake First Nations reserve and will graduate in November. The award offered her some peace of mind as she pursued her dream of being a teacher.

“People don’t think about the emotional aspect of education. To be stressed out, to have your mind in financials and wondering what you’re going to do the next month … it’s hard on a student. Receiving [this award] did me well emotionally, mentally and spiritually,” she said.

Poitras said she is passionate about teaching from an Indigenous perspective and ensuring her students have confidence in their identity.

“In the past, education was forced on Indigenous Peoples as a way to assimilate them. Today, we can use education as an empowerment tool, one teacher at a time.”