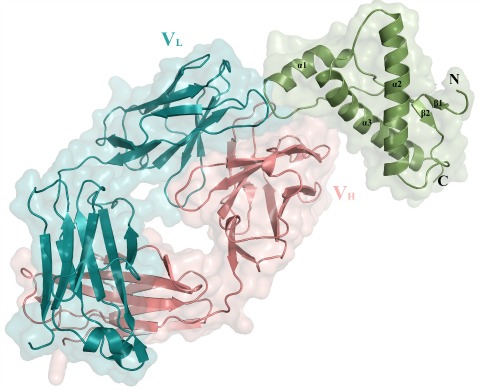 130731-prionbanner
U of A researchers collaborated to create antibodies for a leading prion study in Switzerland and created a 3-D image showing where those antibodies bind to the prion molecule. That will help design the next steps to a cure for diseases like BSE.

(Edmonton) The work of two University of Alberta researchers and their teams has contributed to an important next step in finding a cure for deadly prion-folding diseases in humans and animals.

Professor Michael James of the Department of Biochemistry, professor Nat Kav of the Department of Agricultural, Food and Nutritional Science and their labs collaborated to produce mini-antibodies and antibody fragments, using data provided by principal researchers in Switzerland.

The fragments were then used by the lead researchers at the Institute of Neuropathology in Zurich to study interactions between the antibodies and the prion protein and how it results in cell death.

The work conducted at the U of A helps to open the door to designing a molecule that would block prion infection.

“We hope to design a chemical compound that would bind to some part of the prion molecule to prevent the conversion of the normal form of the protein to the disease-causing form,” said James.

Prion protein infections, caused by structural misfolding within the prion protein, lead to fatal neurodegenerative disorders such as Creutzfeldt-Jakob Disease in humans, Bovine Spongiform Encephalopathy (BSE) in cattle and Chronic Wasting Disease in deer. There is currently no cure.

Using recombinant DNA technology, Kav and his lab produced the mini-antibodies and antibody fragments that were then used by James and ultimately studied biologically in the Zurich lab. Using a process called X-ray crystallography, James’s lab was able to identify the three-dimensional structure of where antibodies and antibody fragments bind to the prion molecule, pinpointing regions that are susceptible to changing to a diseased state.

The discovery now makes it possible to begin designing ways to prevent prion disease, in everything from developing treatment for human victims to creating a preventative additive for livestock feed.

“The U of A collaborated with one of the leading labs in the world, which demonstrates our own level of excellence.”

It also reinforces the U of A’s standing as a leading site of prion research through such institutions as the university’s Centre for Prions and Protein Folding Diseases, James said.

“This latest work advances that.”

The U of A portion of the research was supported by the Alberta Prion Research Institute and PrioNet Canada. The research appears in Nature.