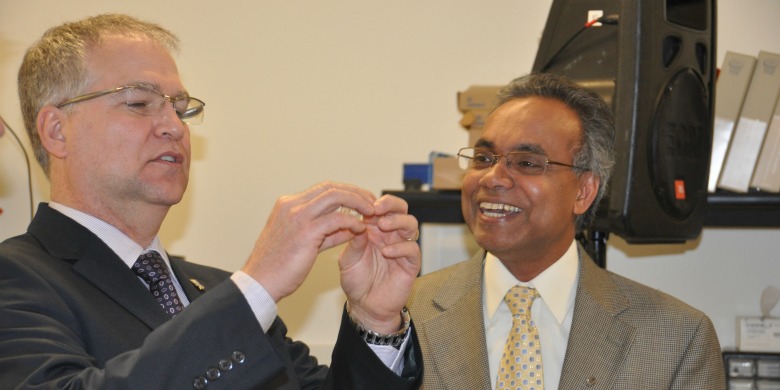 Thundat who leads a team of U of A researchers says they are working to develop sensors that could be used for oil sands processing, biotechnology, detection of diseases and environmental monitoring. “Whether bitumen or our own DNA, it’s all molecules. So we’re trying to understand how the molecules interact with each other so that we can develop better sensing technologies,” he said.

Such exploration is an example of the kinds of research Minister of State, Science and Technology, Gary Goodyear says will continue to position Canada as a leader in the global knowledge-base economy. Goodyear was speaking at the U of A Tuesday where the federal government announced $33 million from the Canada Foundation for Innovation Leaders Opportunity and Infrastructure Operating Fund in support of work such as Thundat’s being done across Canada.

The minister chose Thundat’s lab at the National Institute for Nanotechnology at the U of A to make the national announcement. “Here at the U of A, we’re investing in seven important new research projects worth just over $3.5, including research in oil sands extraction technology, “ Goodyear says. “ The U of A is a world leader in research that’s related to clean and efficient bitumen extraction, and Canada, I’m proud to say, has benefitted greatly from the investments in this field,” he said.

“CFI is helping Dr. Thundat and his team develop more sustainable techniques for oil extraction and refinement. This important research will result in improved oil-sand processing techniques that are both environmentally friendly and cost effective,” Goodyear added.

Six other U of A researchers received CFI support through this latest round of grants:

“The diversity of excellence and impact of the CFI funding recipients’ projects speaks to the incredible talent we have here at the University of Alberta,” says Renée Elio, associate vice-president (research) and professor of Computing Science, who spoke at Tuesday’s announcement. She says the CFI funding helps the U of A compete for the world’s leading researchers.

“The very best new faculty members, post-doctoral fellows and graduate students from around the world chose places to study and to work where they can have the biggest impacts in their fields,” she said. “Investments in research infrastructure, such as those announced today, will ensure that more of these talented individuals decide to make their mark here in Canada.  Facilities and infrastructure funded by the CFI are critical for institutions that aspire to be among the best places in the world to do research.”

And one of those premier places, says Pierre Normad, vice-president, external relations and communications, Canada Foundation for Innovation, is the U of A. “The U of A is one of the best universities in the country.” He says by supporting research, the foundation is investing in people. “As we know, given the right tools, researchers can ‘think big’ and create new opportunities in their own community,” he says.