Is it time to pull the dated ditties with sexist and racist undertones off the holiday playlist? 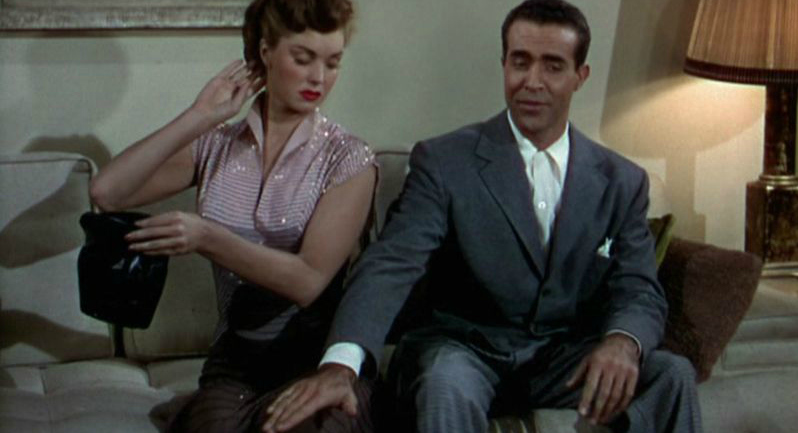 Baby, It's Cold Outside: Ricardo Montalban gets handsy with Esther Williams during their duet in the 1949 film Neptune's Daughter.

Christmas songs are the whipped cream on the cocoa, as important as the tinsel and the tree to our sense of festive coziness.

It’s only when you start to really listen to some of the lyrics that you’ll hear a few sour notes; folded into the jolly goodwill lurk some not-so-warm-and-fuzzy undertones of sexism and racism. Phrases like “What’s in this drink?” as a woman tries to leave a date, or the plot of one song that pokes fun at the Christmastime killing of Grandma.

But isn’t it Grinchy to pick on our frothy, pop-culture holiday favourites? It is Christmas, after all, so shouldn’t we lighten up?

“The more interesting question is what do these songs tell us about ourselves and what our values are, and what was going on at the time that inspired these songs to be written,” said Cristina Stasia, a University of Alberta expert on gender and pop cultural studies. “Actually, the holiday season is a good time to reflect on how far we have—and have not—come and what we can do in the new year to be more inclusive.

“Conversation around these songs is quite limited and quite binarized,” she added. “People say, ‘Leave our Christmas songs alone’ or, ‘That’s a sexist song, let’s stop singing it.’ But what they tell us is a much more interesting conversation than whether they’re bad or good.”

While oozing warmth and fun in how they sound, it’s very easy to passively digest a catchy tune that’s wrapped in nostalgia without stopping to really listen to the words, said Kathleen Danser, a U of A PhD student in music and a professional roots and blues musician.

“There can be a real disconnect to what a song is melodically and what it is lyrically,” said Danser. “I can be walking through a grocery store, humming along to a song that reminds me of a family memory like pie-baking, but when I tune into the lyrics it snaps me out of that hypnotized state and I begin to analyze it.”

Below, Stasia and Danser share some thoughts on lending a 21st-century context to four popular Christmas songs with dubious or outdated lyrics.

The Idina Menzel/Michael Bublé version of Baby, It's Cold Outside ups the creepy factor by featuring kids in the video.

Written in 1944, this duet tells the tale of a woman politely trying to end a date for the evening, with a partner who insists she stay. Its most contentious line, “What’s in this drink?” resonates with uneasy contemporary leanings towards the issue of informed consent.

“Nostalgia provides a sugar-coated haze to the past. You can look back and say the lyrics are cute, but it is problematic now, and it reminds us of how long the issue has been a problem,” Stasia said. “Now we are finally having the conversation.”

Recently, a pair of songwriters, disturbed by the playful but wolfish tone, took to SoundCloud with an updated version of the song, changing it so the male lead accepts the woman’s answer of no and wishes her a safe trip home.

“It’s a racially inflected wolf and mouse duet. You have this racialized male character being predatory towards this idealized white woman; it isn’t really discussed that the scene which made this song famous plays into racial fears of the time and positions the man of color wolfing the white mouse.”

This bouncy 1951 feel-good tune needs a bit of an update to break out of the tired gender stereotype for the tots in the song, Stasia said. Barney and Ben get hop-a-long boots and a pistol that shoots, Janice and Jen get dolls that walk and talk.

“Toys were gendered then, and they still are now. You walk into a toy store and there’s a pink aisle for girls and a blue aisle for boys. Wouldn’t it be fun to see Janice and Jen as budding engineers, disassembling the mechanical doll? Now there’s a rewrite waiting to happen,” Stasia said.

This seductive 1953 tune features one woman’s long, luxury-loaded list of Christmas wishes, everything from furs to a convertible. The tune, which trumpets an exchange of sexuality for material goods, is still covered by contemporary artists like Mariah Carey, Stasia noted with dismay.

“Why are these women still singing it? It’s not that cheeky to just update the wish list to ask for an iPhone; I’d be more excited if current singers updated it to reflect what women actually need. Time to leave some equal pay and reproductive rights under the tree, instead of a sable.”

“There’s the idea that women need to be ‘good’ as defined by a man,” said Danser, who suggested lyrics more fitting for today:

‘Santa honey, I don’t care what you think

Go back to your own home, don’t you bother me

I’m puttin’ up my Christmas tree’

That said, the first artist to sing it, Eartha Kitt, was breaking ground, Stasia added.

“She was one of the first black women to embody the femme fatale role and was unapologetic about her intelligence and her politics. There is an awareness of the economies of seduction, the classic and dominantly white femme fatale trade of presumed ‘good’ behaviour for material and power gain. Kitt was doing something quite radical.”

Grandma Got Run Over by a Reindeer

This 1979 ditty, which lampoons the death of Grandma as the victim of a hit and run by Santa and his sleigh, came out as a second-wave feminist movement was rising in the conservative era of Reaganism.

“We were moving into a period of extreme backlash against feminism,” Stasia noted. “It makes sense the song would come out around then and that Grandma is positioned as someone who gets in the way of male fun and so her death is something to celebrate.”

The song plays into the idea that Grandpa was relieved to be rid of Grandma and was taking her death well, ‘watching football, drinking beer and playing cards with cousin Mel.’

“The fact that it was a novelty song, a party song with a polka beat to it, doesn’t make it less offensive,” Danser said. “It sounds lighthearted, but that’s in direct contradiction to the lyrics. We should have brought more of a critical analysis to it at this point in our history, but we haven’t yet.”

Add your own memories to the playlist

Breaking with tradition and questioning some of those enshrined favorites on the holiday playlist may make us feel like humbugs, but it’s also a chance to develop a fresh perspective, Danser said.

“I don’t think critical thinking will dampen the happiness of Christmas. I think the songs become richer when we can decide how we want to engage with them and when we decide to make room for everybody.”

For those who want to, Stasia and Danser suggest reviewing your own favourites to see if they still fit with modern-day sentiment, and updating your playlist with new rewrites of old classics.

“You can have the melody with lyrics that engage diversity and inclusion,” Danser said.

Better yet, make it a family affair.

“Print out some song lyrics and rewrite the lyrics together. Or write your own songs, record them on your smartphone and keep track of them for years of memories,” Danser said.

Added Stasia: “There are so many new songs to be written.”