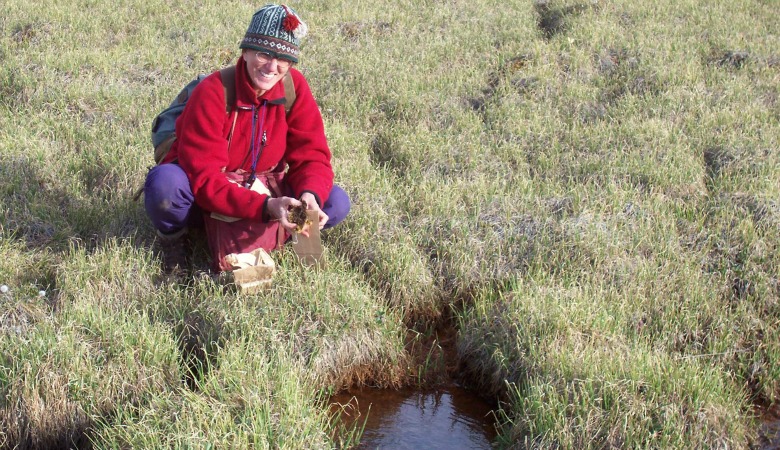 130527-catherine-lafarge-banner
Catherine La Farge gets an up-close look at bryophytes uncovered by the retreating Teardrop Glacier on Ellesmere Island in the Canadian Arctic Archipelago.

(Edmonton) When Catherine La Farge threads her way through the recently exposed terrain left behind by retreating glaciers, she looks at the ancient plant remains a lot closer than most. Now, her careful scrutiny has revealed a startling reawakening of long-dormant plants known as bryophytes.

La Farge, a researcher in the Faculty of Science, and director and curator of the Cryptogamic Herbarium at the University of Alberta, has overturned a long-held assumption that all of the plant remains exposed by retreating polar glaciers are dead. Previously, any new growth of plants close to the glacier margin was considered the result of rapid colonization by modern plants surrounding the glacier.

Using radiocarbon dating, La Farge and her co-authors confirmed that the plants, which ranged from 400 to 600 years old, were entombed during the Little Ice Age that happened between 1550 and 1850. In the field, La Farge noticed that the subglacial populations were not only intact, but also in pristine condition—with some suggesting regrowth.

In the lab, La Farge and her master’s student Krista Williams selected 24 subglacial samples for culture experiments. Seven of these samples produced 11 cultures that successfully regenerated four species from the original parent material.

La Farge says the regrowth of these Little Ice Age bryophytes (such as mosses and liverworts) expands our understanding of glacier ecosystems as biological reservoirs that are becoming increasingly important with global ice retreat. “We know that bryophytes can remain dormant for many years (for example, in deserts) and then are reactivated, but nobody expected them to rejuvenate after nearly 400 years beneath a glacier.

“These simple, efficient plants, which have been around for more than 400 million years, have evolved a unique biology for optimal resilience,” she adds. “Any bryophyte cell can reprogram itself to initiate the development of an entire new plant. This is equivalent to stem cells in faunal systems.”

La Farge says the finding amplifies the critical role of bryophytes in polar environments and has implications for all permafrost regions of the globe.

“Bryophytes are extremophiles that can thrive where other plants don’t, hence they play a vital role in the establishment, colonization and maintenance of polar ecosystems. This discovery emphasizes the importance of research that helps us understand the natural world, given how little we still know about polar ecosystems—with applied spinoffs for understanding reclamation that we may never have anticipated.”

The research was published in the Proceedings of the National Academy of Sciences.