You won’t believe the mind-blowing high-tech healing discoveries coming out of a multidisciplinary rehab centre at UAlberta. 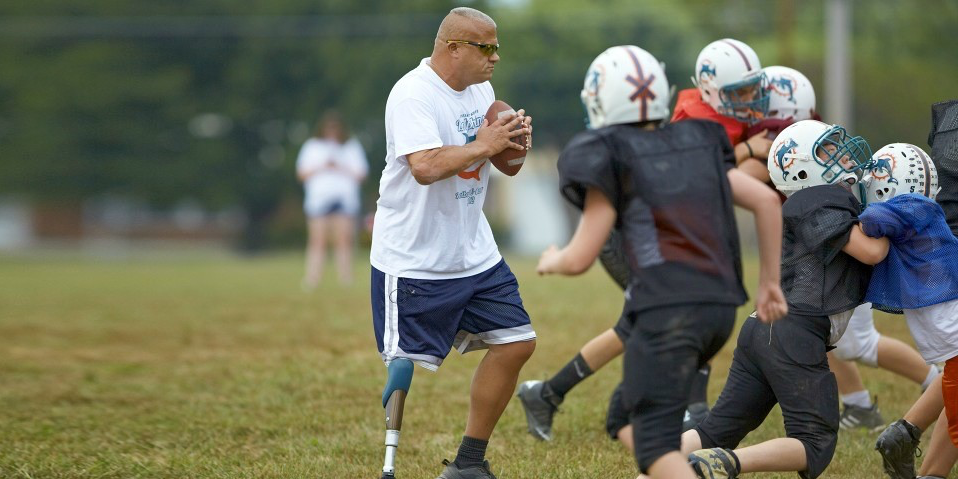 Next-generation bionics out of UAlberta's SMART Network are improving quality of life for people who wear prosthetics and saving lives around the world. (Photo: Ottobock USA)

A sock that can prevent the most common hospital death in North America.

A computerized knee joint that functions neurologically just like a real knee.

Sounds like inventions created out of a futuristic science lab in a Marvel comic book, but these and others like them come from teams at the University of Alberta’s new SMART (Sensory Motor Adaptive Rehabilitation Technology) Network.

“We’ve created a unique ecosystem where electrical engineers, computer scientists, biologists, surgeons, nurses and rehabilitation specialists all work together, effectively accelerating the translation of a scientific idea into a practical real-world application,” said Vivian Mushahwar, a biomedical engineering expert and director of SMART.

The benefit to patients is profound, she added, from providing the gold standard in artificial arms to reducing the risk of painful shoulder injury in everyone who depends on a wheelchair for daily mobility.

In honour of the opening of a dedicated, $8-million state-of-the-art facility on campus tomorrow to support the work of 90-plus researchers, which began back in 2010, here is a glimpse of five discoveries.

Walking with an artificial limb above the knee is a belaboured, stiff process. Enter SMART researchers Kelly James and Richard Stein, who developed the C-Leg, a microprocessor-controlled knee joint that adapts to a person’s movement in real time.

How it works: An intelligent sensor chip in the prosthetic detects where the limb is in space and makes precise adjustments at every moment of every step, so you can actively extend the knee in a fashion that allows for a smooth step. “This invention was the beginning of SMART,” said Mushahwar, since so many disciplines were called on to develop the innovation.

Who uses it: Thousands of people around the world depend on a C-leg to walk in a smooth, unencumbered manner up steps or backwards, and to play sports with ease. It was acquired by Ottobock, a leading manufacturer of artificial limbs, and has become the gold standard in care over the fast few years.

Some people with neurological conditions such as a stroke, spinal cord injury or multiple sclerosis experience what’s known as “dropfoot”: weakness or paralysis of the muscles that lift the front of the foot causing foot drag. Richard Stein’s U of A lab and the SMART team developed WalkAide, a device that leverages functional electrical stimulation to improve dropfoot.

How it works: The AA battery-powered device wraps around the knee and contains a sophisticated tilt sensor technology that analyzes movement and adjusts timing of the delivery of electrical signals to a nerve that controls movement in the ankle and foot. The gentle electrical impulses activate the muscles to raise the foot at the appropriate time during the step cycle.

Who uses it: WalkAide was acquired by Karl Hagar Limb & Brace and is available for patients worldwide who want to walk in a carefree manner.

Anyone who suffers from mobility issues is at risk of developing pressure ulcers, painful gaping wounds that result when bone breaks down soft tissue. “It’s a very serious secondary complication that costs Canadian health care $3.5 billion each year to treat,” said Mushahwar. The problem is lack of movement. The solution, as Mushahwar saw it one day, was bionic underwear. Leveraging the SMART network, she developed Smart-e-Pants.

How it works: “The undergarment delivers an electrical stimulation that causes the muscles at risk of breaking down to contract every few minutes, at the same rate that the rest of us would move or shift, thus reducing the risk of pressure ulcers forming,” she said.

Who uses it: Smart-e-Pants are now being tested in clinical trials to demonstrate continued effectiveness. “The SMART network has enabled us to test this at five different clinical centres. And we have rehabilitation specialists, ICU doctors, nurses and patients working with garment designers, biologists, neuroscientists, engineers and computer science specialists to test and adjust the tool. It’s an example of SMART at its best,” added Mushahwar.

Anyone who uses a wheelchair is at risk of upper body overuse, particularly shoulder injury. “They can lose the ability to wheel themselves around—and if you can imagine, that’s like losing the ability to use your legs all over again,” said Mushahwar. The U of A’s Martin Ferguson-Pell developed Redliner™, a wheelchair activity monitor that measures upper body overexertion, a situation they dub “redlining.”

How it works: The device is attached to the wheelchair and its sensor systems connect to mobile devices like a cellphone. It keeps track of many aspects from wheel velocity to distance travelled with each push. When it senses the occupant is tired, it provides motorized assistance.

Who uses it: Redliner is in the process of commercialization and expected to be available to the 65 million wheelchair users around the world in the next two to three years.

Pulmonary embolism is a fatal condition that occurs when a blood clot travels to the lungs. Preventing this number one cause of hospital deaths is a critical priority, says Mushahwar. A team at the SMART Network that includes Shaun Gray, Glen Isaacson and Einat (Natalie) Ravid is working on a sock to prevent deep vein thrombosis (DVT)—the formation of a blood clot—from happening in the first place.

How it works: The socks contain electrodes that stimulate the muscles to squeeze every few minutes, compressing the veins and ensuring safe blood flow to the heart. “It’s easy to put on and very subtle,” said Mushahwar. “You can sleep with the sock on.”

Who uses it: There are 1.3 million cases of pulmonary embolism every year in Canada and the United States. Anyone who struggles with DVT is a candidate for the sock, for example, by slipping it on for long flights. The sock is still undergoing testing and is expected to be available within the next five years.