A century of physiology began with a war hero 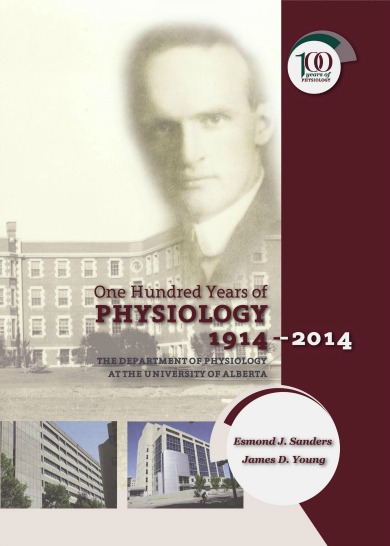 He was young and ambitious, much like the budding medical school where he would play a major founding role. Heber Havelock Moshier was named the first chair of the Department of Physiology in 1914, a task the 24 year-old physician approached with great avidity. Though nearly a century has passed since Moshier last walked through the University of Alberta campus, he left a legacy that would inspire others long after he left.

In honour of its centennial year, the Department of Physiology (the Faculty of Medicine & Dentistry’s oldest department) has released a history book written by former department chair Esmond Sanders (1994–2004) and current chair James Young (2012–present). The chronicle explores a century of growth and advancement that began with the inspiring and tragic tale of Heber Moshier.

Before he agreed to lead the new department in Edmonton, Moshier graduated from the University of Toronto’s medical program at the age of 20 and briefly practised medicine in Toronto and Calgary. He was officially recognized as chair of physiology from 1914 to 1918, but took military leave in 1916 after enlisting at the age of 27.

With the help of a few part-time practising physicians called “demonstrators,” the new chair taught pharmacy and physiology, which at that time included the disciplines now known as pharmacology and biochemistry. In his short time on campus, Moshier also recruited the Department of Physiology’s most distinguished professor: James B. Collip, who would be instrumental in the discovery of insulin.

After joining the military, Moshier raised the 11th Canadian Field Ambulance Battalion, part of the Canadian Army Medical Corps. Thirty-two medical and pre-medical students were recruited from the four Western Canadian universities, including 16 students from the U of A—nearly the entire medical class of 1914. Major Moshier initially commanded the U of A contingent, until he was promoted to lieutenant-colonel and took command of the entire battalion in 1918.

Moshier had his men keep a journal: “Diary of the Eleventh: Being a Record of the XIth Canadian Field Ambulance (Western Universities). Feb. 1916–May 1919.” It recounts the conditions Moshier and the medical students endured and the duties they undertook from the time the battalion was raised in Edmonton through the battles of Somme, Vimy Ridge and Passchendaele. The detailed, first-hand account of the activities of the field ambulance can be found in the Peel Collection of the University of Alberta Library and is available online.

The students who formed the 11th Canadian Field Ambulance Battalion acted mainly as stretcher bearers for the dead and wounded. They were the vital link between the regimental aid posts in the trenches, the field ambulances and the advanced dressing stations where Moshier worked. For this work, they received university course credit toward their medical degrees. At least two deaths were recorded among the students, though it is certain that many lives were saved.

Two months before the end of the war, the battalion suffered a heavy loss: Heber Moshier was killed in action Aug. 29, 1918, at the age of 29. At his burial in Villers Station Cemetery, France, it was said that, “It is given to a few men to leave so much achievement behind them at such an early age ... to lose Colonel Moshier was to suffer one of the heaviest losses in the unit’s history.”

Today, Heber Moshier’s name lives on at the Faculty of Medicine & Dentistry. The Moshier Memorial Gold Medal in Medicine remains one of the most prestigious student honours awarded by the faculty.

A century of physiology began with a war hero