A champion and a scholar

Brendan Bottcher wasn’t willing to choose between becoming a world-class curler or an engineer—and thanks to his coach and professor, he didn’t have to. 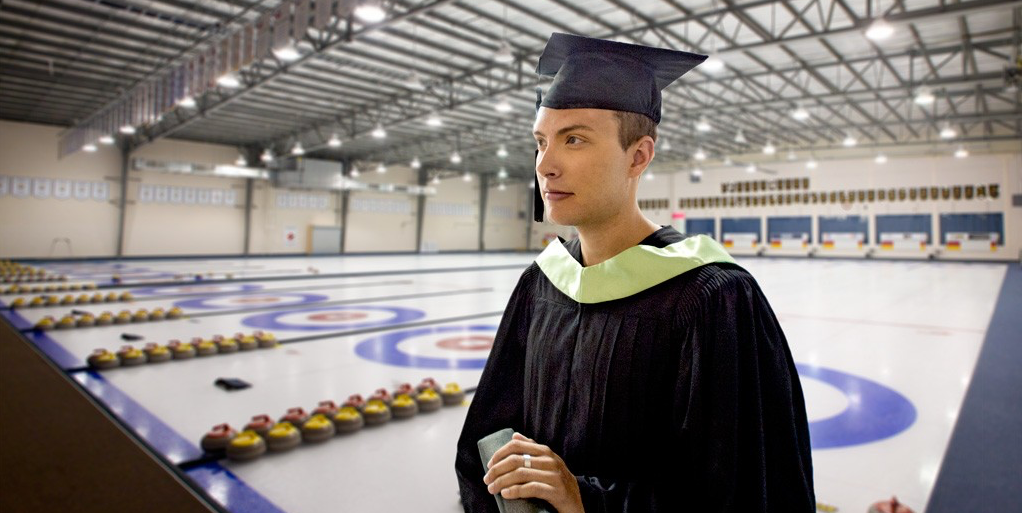 Brendan Bottcher managed to skip the Canadian junior men's curling team to a world championship without having to skip class. (Photo: Richard Siemens)

(Edmonton) Most people would have to content themselves with pursuing a career as a world-class athlete or earning a university degree in a discipline with a great occupational outlook. That was not a choice Brendan Bottcher was willing to make.

The 23-year-old Sherwood Park native is graduating from the University of Alberta with a degree in chemical engineering, but he’s also the skip of a top-ranked curling team that will embark this fall on a two-year journey of national and international competition that could see them qualify for the 2018 Olympics in Pyeongchang, South Korea.

Bottcher says it wasn’t always easy balancing the demands of classes, projects and exams with a rigorous schedule of practice, training and competition.

“I had to pick my electives and classes so I could have certain afternoons off, and we’d train most days in the afternoon or early evening, so I’d say four out of five school nights I was here until seven or eight o’clock,” he says. “Between practices and one or two games a week, our personal training and all our fitness, it was a pretty big time commitment.”

It’s a commitment Bottcher seems to have handled with aplomb. In 2012, the year his team won the Canadian and World Junior Championships, Bottcher also curled for the Golden Bears, earning Athlete of the Year and Academic All-Canadian of the Year accolades from the U of A. Bottcher says skills common to curling and engineering helped him achieve his athletic and academic goals.

“In engineering, one of the concepts they try to teach is leadership. There’s a lot of teamwork they try to build in, because engineering is a team-based discipline. So I think the teamwork skills and communication skills I learned on the ice transferred back. The other skill I think I learned between the two of them was time management. I had friends who were at school from eight in the morning until eight at night every day, and my world just couldn’t look like that, so I really learned to prioritize what I was doing—when I was at school I was at school, and when I was curling I was at curling, and I tried as much as possible not to mix up the two.”

Bottcher also credits the support of his varsity coach Rob Krepps, who is now the coach of his men’s team, as well as John Nychka, professor and associate chair of the undergraduate program in the Department of Chemical and Materials Engineering, for smoothing the way.

“I leaned on Rob a lot. He really helped me balance all of my academics—he would proctor exams for me on the road, he would work with my professors to try to get them to understand what we were doing here so they could be a bit more accommodating. He really opened a lot of doors for me,” Bottcher says.

“John Nychka also played a big role in helping me sort out my schedule and talking to my professors about making this possible for me. Having someone higher up who is willing to go to bat for you and ask the right questions makes a world of difference.”

With his team entering the upcoming season ranked ninth in the world and the possibility of qualifying for the Olympics in the next two years, Bottcher’s future as a curler seems bright indeed. But armed with a university degree and a passion for learning, Bottcher says he’s not interested in restricting himself to one set of prospects.

“I definitely want to pursue my engineering discipline. I got into it because I like it and I do want to continue with it,” he says, adding that he would eventually like to add an MBA to his list of accomplishments.

“I loved my time at the university in general, it was a really positive experience for me, being around so many people with similar goals, so I would like to come back one day.”

A champion and a scholar