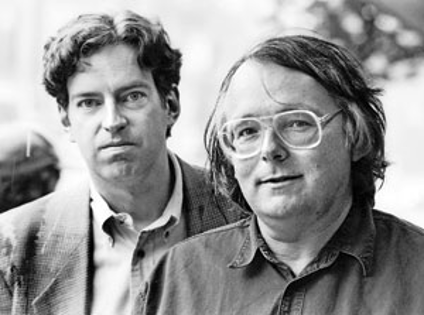 John Geiger, '81 BA, (left) with U of A professor emeritus Owen Beattie in 1988, just after the publication of Frozen in Time.

A cold case heats up again

In honour of today's discovery of a ship from the ill-fated Franklin expedition, we revisit an earlier discovery that shocked the world. 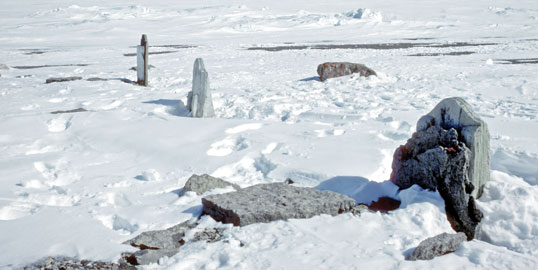 This story was originally published in the Winter 2012-13 issue of the University of Alberta's alumni magazine, New Trail.

Twenty-five years ago, a U of A professor together with a newly minted alumnus, John Geiger, ’81 BA, published Frozen in Time, a shocking and influential account of the Franklin expedition’s disastrous final days. Lead poisoning. Cannibalism. Then there were those photos—of a young sailor thawing out after more than a century buried in the tundra. Now, Geiger—today the president of the Royal Canadian Geographical Society—writes about the renewed interest in the ill-fated expedition and the pieces of the story that still remain to be uncovered.

The Royal Geographical Society Islands are pancakes of gravel in Canada’s central Arctic, unremarkable except for their proximity to the place where the final days of the Franklin expedition were played out. I stood on the islands a few months ago, and thought once again of the expedition’s brutal fate and what an easy place it would be to die, especially for those touched by insipid and unrecognized illness.

It was an entirely new way of looking at the mystery surrounding the destruction of the 1845 British Arctic Expedition commanded by Sir John Franklin. Not one of Franklin’s 129 officers and crew survived. The remains of some were found strewn across the desolation of King William Island. By any standard, that constituted a mass disaster. So, instead of relying solely on the journals of searchers, the oral tradition of the Inuit and the detritus of the expedition, Owen Beattie, a physical anthropologist at the University of Alberta, applied forensic methods to that cold case.

Beattie viewed the historic mystery as a modern scientific problem, and he was no “Franklin freak,” as they are sometimes called, that type who pursues “the fate of” with the same bent enthusiasm as a 9/11 conspiracy theorist. In fact, he had come upon the story innocently.

The U of A has always been—and remains—at the forefront of northern research, and during the 1980s it was a hotbed for Arctic archeology. Beattie found himself in a department with experienced northern scholars like Charles Schweger and Cliff Hickey, and bright young graduate students, among them Jim Savelle, ’86 PhD. It was Savelle who introduced Beattie to the Franklin problem and collaborated with him to survey King William Island in 1981.

The U of A’s Canadian Circumpolar Institute (then known as the Boreal Institute for Northern Studies) provided the seed money for Beattie’s research precisely because he was not using cookie-cutter archeology. His proposal was revolutionary for the time: to attempt to locate human remains from the Franklin expedition and to assess cause of death and attempt identification through facial reconstruction.

The verdict of what had happened to the Franklin expedition had not changed since the 1930s, when British historical researcher Richard Cyriax published his authoritative account, Sir John Franklin’s Last Expedition. Cyriax had devoted years to sifting through the minutiae of the expedition, leaving no rock unturned—except for one. But it was a boulder: he never visited the scene of the disaster. It was accepted wisdom that there was no point. After all, everyone already knew what the causes of death were: scurvy and starvation after the ships had become trapped in multi-year ice. Such are the vagaries of Arctic exploration.

I’d say the rest is history, except it’s not. It’s forensic anthropology. In 1981, Beattie and Savelle succeeded in locating a fragmentary skeleton from one of Franklin’s crew, and in 1982, with Walt Kowal, ’79 BA, ’86 MA, they had succeeded in locating fragmentary remains from at least six other Franklin crewmen. The bone was tested and revealed elevated levels of lead, levels so high it would have caused serious health problems. Cut marks found on the bone also proved Inuit accounts, hotly disputed at the time, that cannibalism had been practised among the dying Franklin crewmen. Beattie, however, needed to determine if the lead exposure had occurred prior to the expedition or on the expedition, so he received permission to exhume the three Franklin expedition graves on Beechey Island.

Because of permafrost, Beattie felt there was a chance he would find preserved tissue. What he did not know was that in 1984 he would find himself staring at John Torrington, whose blue eyes stared languidly back at him through thick brown eyelashes. This, though Torrington had been dead for 138 years. He and the two other well-preserved crewmen buried on Beechey Island—the so-called “frozen Franklins”—caused an international sensation.

Torrington, in fact, was on People magazine’s list of the 25 most intriguing people of 1984, ahead of Bill Murray and Michael Jackson. Johnny Carson mentioned the research on The Tonight Show. Beattie himself also achieved a measure of (unwanted) celebrity and was even immortalized in a well-known British poem, “Envying Owen Beattie.”

I had studied history at the U of A, and given the enormous interest in Beattie’s research, we wrote a book about it, Frozen in Time: The Fate of the Franklin Expedition. Some Franklin experts were then, and likely remain, in a knot over the book and its contention that a source for the lead was the expedition’s tinned food supply. Think of it: a Royal Navy expedition obliterated in part by tin cans. How does that fit with the conventional analysis of heroic expiration amid the ice? Besides, Cyriax had made no mention of lead poisoning.

The book did rather well, but the best part for me was the opportunity to collaborate with Owen, a brilliant and utterly egoless guy. In all, we travelled north together four times, had many adventures, braved polar bears and plagues of mosquitoes (all the usual terrors of the Arctic), and wrote a second book, Dead Silence, on another Arctic mystery, the fate of the 1719 James Knight expedition. What struck me during the field seasons spent in the Arctic, beyond the sense of isolation, is the tangibility of history. Whether Thule, Inuit, explorer, trader or whaler, the sites are often immediately visible. There are few places where you feel closer to the past.

When it all ended, Beattie went off to do humanitarian forensic work in Cyprus, Somalia and Rwanda, and I went off to write three other books. But working with Owen left an indelible mark. I have returned to the Arctic many times, and my interest in the region continues with my current role as president of the Royal Canadian Geographical Society.

Then, last summer’s Parks Canada search for the lost Franklin exploration ships Erebus and Terror sparked a brief burst of public and media interest again in the mass disaster. Suddenly, I found myself back on CTV’s Canada AM, nearly a quarter century after Owen and I first appeared there, talking again about the Franklin mystery, and rashly predicting the bureaucrats would locate at least one wreck. 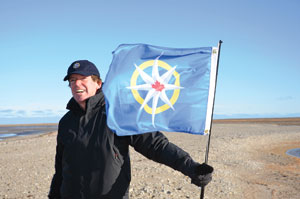 In the end, the Parks Canada effort failed to find anything. Well, that’s not entirely true: a survey on land did produce a toothbrush, demonstrating that in their last days, as the crewmen shambled along King William Island in their grim retreat into oblivion, they maintained an interest in dental hygiene.

Hopefully, someone will have another go at it. Sooner or later, Erebus or Terror will be found, and it will be very exciting to have a glimpse at these submerged artifacts that no doubt will eventually become the basis of a diorama on Victorian Arctic exploration. And who knows, they may also offer some valuable insight into the disaster, clues to some of the enduring Franklin questions. It will be interesting to see, however, whether they offer more information than Owen Beattie has already discovered by applying the tools of forensic science to that ultimate source of information: human remains.

A cold case heats up again