A hero comes home and a dream comes true 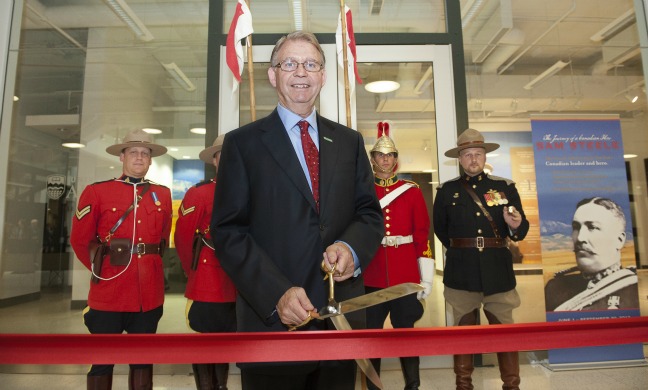 (Edmonton) Sir Samuel Benfield Steele was said to be full of stories. Now a new Steele story has unfolded—a story of how 88 dusty cardboard banana boxes, filled with documents and memorabilia detailing his remarkable life, crossed the Atlantic and came to the University of Alberta, where they’re helping to strengthen the U of A Libraries as a premier repository of Western Canadian history.

During his tenure as vice-provost and chief librarian, Ernie Ingles has been committed to achieving that status for the university. So it’s not surprising that he is a central character in the plot, hatched one late Friday night in 2007 in his boardroom, to bring to the university historical records without which a complete understanding of Canadian history, especially that of the West, would be impossible.

“As we sat there, we hummed, furrowed and wondered whether it would be possible to bring the collection home, and find the resources to do it. And we examined all of the risks that we thought we could, should or should not take,” Ingles recalls.

Pondering alongside him were two colleagues: Merrill Distad, associate director of libraries (research and special collections services), who had discovered earlier that the collection existed and that Steele’s descendants planned an auction of it at Christie’s; and Mary-Jo Romaniuk, former acting chief librarian. It was Romaniuk who settled the issue once and for all.

"It's the right thing to do"

“Her remark was, it’s the right thing to do, and the risk is in not doing it. The risk for the future, for the university where this collection absolutely was preordained and predestined to come,” Ingles says. “So on that evening, very late in December, based upon that somewhat bravado, we decided to go for it.”

Four years later, almost to the day, representatives from the British and Canadian governments, the British Royal Family and U of A officials gathered at Trafalgar Square to see off more than 10,000 documents—including diaries, memoirs, military logs, official reports, scrapbooks, photographs, personal letters and military artifacts—that belonged to Steele.

Now, that historical treasure trove is available for all to see with the formal public launch of the exhibition, The Journey of a Canadian Hero, on display until Sept. 30 at Enterprise Square Gallery in downtown Edmonton.

“Steele’s remains were transferred to Canada from London after his death in 1919, but the ceremony four years ago was the homecoming of his soul,” Alberta Culture Minister Heather Klimchuk told the audience.

“His soul as represented by his collection gives us the essence of a man and his unique personal perspective on Canadian history. I congratulate the U of A Libraries for mounting this extraordinary exhibit, and bringing a great figure in Canadian history home to us. I can’t think of a better example of how culture connects us to our past, of who we are and what we could be,” she said.

The successful plan that averted what Romaniuk described as a terrifying thought of having the collection with a private collector, is also an example of a trait in Albertans, says Carl Amrhein, U of A provost and vice-president (academic).

“What we’re witnessing tonight is yet another example of what I’ve always thought of as that tremendous Alberta advantage, which is the Government of Alberta, community leaders, the city of Edmonton and the university, coming together to pull off something that I think would have eluded most of our peer institutions across Canada,” Amrhein said. “And we can do it in Alberta because everybody has that genetic ability to represent, to understand and to see what makes sense for this remarkable province.”

Preserving the past for a new generation

Amrhein also noted that the results of that Alberta acumen will benefit the rest of Canada, because the university will put the collection online. “To date, more than 10,000 pages have now been digitized and are available for viewing on the website,” he said. That, along with the exhibit, will introduce “a whole new generation of Canadians to a man who is not nearly as well known as he should be,” Klimchuk said. “He was there for so much of it in his time, from the Klondike Gold Rush to the Great War, and many events in between.”

Sharing the information is in keeping with the tradition of a great university, says Romaniuk. “It is the responsibility of a great research library to acquire, share and preserve great collections. This exhibit must travel and it will travel, so all Albertans and Canadians get the benefit of what we’ve put together. That is Henry Marshall Tory’s vision, I believe, for uplifting the whole people.”

The Steele collection adds to the Peel's Prairie Provinces website through which the university has been sharing documents related to development of the Prairies. Before cutting the ribbon Wednesday, U of A chancellor Ralph Young said the collection will help tell future stories.

“It’s very important that we retain the knowledge of our past, because each generation and its historians see the past with different eyes and with different perspectives,” he said. “It’s equally important that we collect and preserve the primary records that have come down to us from our past. These records provide the means by which future biographies and histories may be built upon.”

A hero comes home and a dream comes true
Newsroom