A high-heeled hazard at work? 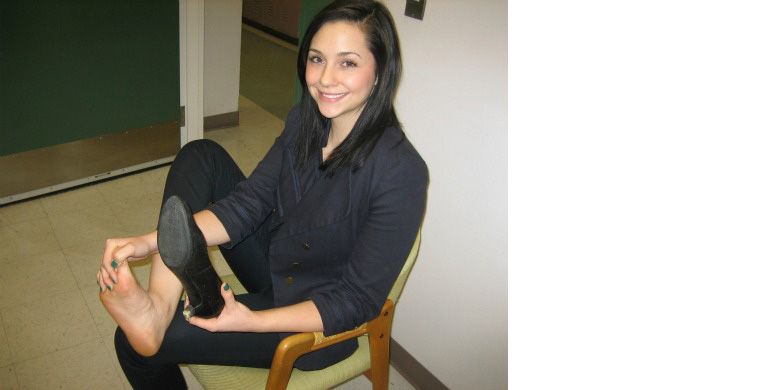 120508-highheelsbrittanygora-banner
U of A student Brittany Gora drew on her work experience as a server for her research project.

(Edmonton) As a lounge server, Brittany Gora spends a lot of time on her feet, and has, in her four years on the job, had some slips and spills as she carries trays to her customers. So when a class assignment about workplace hazards arose, the University of Alberta student knew just what she’d research—high-heeled shoes.

Required to wear heels for work, Gora, a fourth-year student in the Department of Human Ecology, is always a little worried about hurting herself. “I slip at least once per shift, and I wanted to see if other workers felt they were at risk.”

For her research project, Gora interviewed 35 female wait staff, all of whom said they’d either slipped, tripped or fallen on the job, on average once a week. Of those, 40 per cent said they’d been injured as a result, and 93 per cent were wearing high-heeled shoes at the time. As well, 91 per cent of them reported that they were required by their employers to wear heels on the job, but only 23 per cent received suggestions on appropriate heeled shoes to wear. None were actually supplied with the mandatory footwear.

Her findings have Gora, a 22-year-old clothing and textiles student, wondering why there aren’t regulations about safe footwear—heeled or not—for servers.

“I don’t understand why there isn’t a standard in place. There is legislation for reflective tape on other kinds of work clothing, for instance.”

Though Gora herself doesn’t mind wearing heeled shoes—and heard the same from several of the women she interviewed—she’d like to see servers offered the choice to opt out of sky-high footwear.

And even if employers don’t give their wait staff the go-ahead to go flat-footed, “I believe there are alternatives that will make wearing heels safer.”

Gora, who reviewed 12 related studies on the topic of falls and workplace safety as part of her research, said she’d also like to see guidelines on heel height as well as recommendations in employee handbooks on appropriate types or brands of shoe to purchase, “if the hospitality industry wants to make it mandatory to wear heels.”

Gora plans to pursue a career in fashion merchandising after graduation from the U of A, but hopes research will continue on the subject of footwear safety for servers.

“They tend to be overlooked in the workplace population. Servers don’t have to wear hard hats or work with heavy machinery, so there is no larger concern for why they should have safety equipment, but there are risks.”

A high-heeled hazard at work?
Newsroom