A leading light for humanity 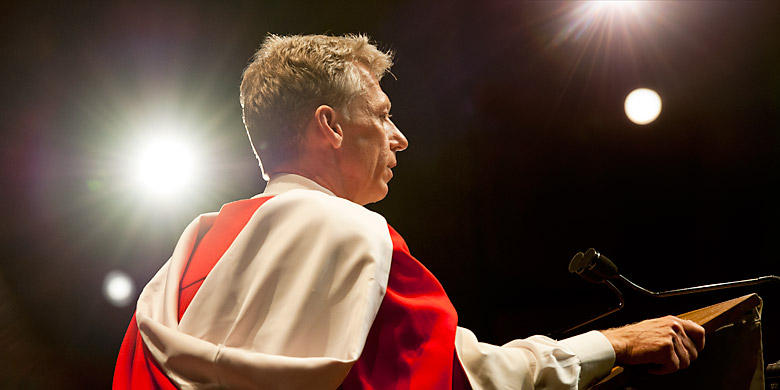 James Orbinski, former president of Doctors Without Borders and co-founder of the medical humanitarian organization Dignitas International, urged graduates of master’s programs at the University of Alberta to adopt those values as starting points for their actions and decisions as they embarked on the next chapter of their lives. Orbinski delivered this message as he accepted his honorary doctor of laws degree.

Orbinski recounted a story from the life of a person he considered his hero: Hannah Arendt, a Jewish American political philosopher. Arendt escaped Nazi Germany in her early 1930s, first to France, then to the United States. Orbinski read an excerpt from a book she wrote while she covered the trial of Nazi war criminal Adolf Eichmann. Her thoughts on our personal responsibilities, he said, include the duty to speak and to listen to others in a “dialogic process that respects the dignity of the other.” Her evaluation of Eichmann, whom he says she described as commonplace and ordinary, displayed an objective dissection of his acts that emanated from a major character flaw: thoughtlessness or the inability to critically examine ideas and actions with any thought toward their consequences.

“Thoughtlessness. It was the absence of thinking which is so ordinary an experience in our everyday lives, where we hardly have the time, let alone the inclination to stop and think,” said Orbinski, quoting Arendt. “Absence of thought is not stupidity. It can be found in highly intelligent people.”

Orbinski spoke of how some may consider the three values or the belief in authentic hope to be radical ideas. Acting with courage and for the right reasons, even if they go against policy or orders, while radical, can offer hope and inspiration to the most vulnerable people. He cited Maj.-Gen. (retired) Romeo Dallaire as an iconic example of someone who acts with courage for the right reason. Dallaire’s courage, he noted, could be considered the launching point for the development of an international court to try those accused of war crimes and crimes against humanity.

“General Dallaire became an example of what the United Nations and what the community of nations should have done during the genocide,” said Orbinski. “Courage. We cannot know where it will lead, but we know that it is the source of right action and it is the source of inspiration for others.”

In closing, Orbinski—who himself was chef de mission for Doctors Without Borders during the genocide in Rwanda in 1994—noted that the beautiful day for the graduates could be reproduced for them if they simply used the personal and academic knowledge they held and applied it using those three values. In doing so, he said, they would be in the right place for delivering what they need to help the world face the myriad challenges before it.

“Our task, simply put by Brazilian educator Paulo Freire, is to change some conditions that appear as so obviously against the beauty of being human,” said Orbinski. “Congratulations to each of you on this beautiful day, and my full and best wishes as you engage your daily lives and as you bring your new knowledge and your right focus and your right starting point to each beautiful day.”

A leading light for humanity
Newsroom