A Life of Extremes

It’s summer on the Yukon’s Mount Logan, Canada’s tallest peak at 5,959 metres. If you climb to 2,100 metres the only mammal present is the collared pika. 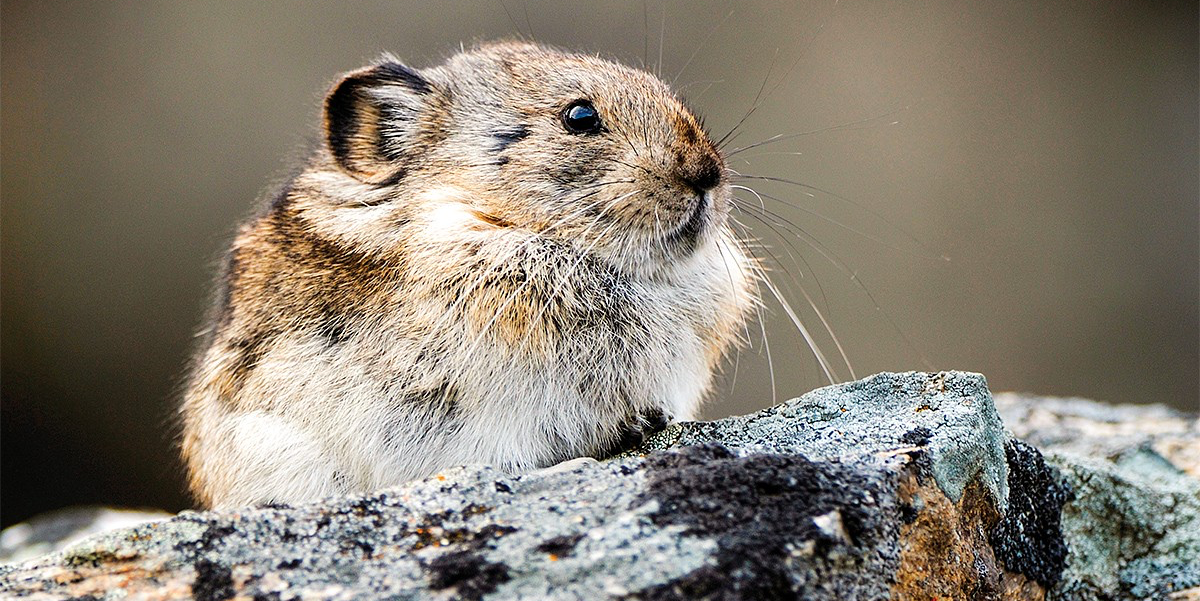 It’s summer on the Yukon’s Mount Logan, Canada’s tallest peak at 5,959 metres. If you climb to 2,100 metres the only other mammal is the collared pika. Its fluffy, round body — about the size and shape of a guinea pig — perches on a rock, nose twitching and whiskers shivering. Suddenly the pika is gone, bounding over rocks with agility reminiscent of its cousin, the rabbit. The pika is collecting leaves and grasses for its winter pantry, but this hearty lagomorph doesn’t go far in its search. Pikas live in the same 30-metre radius throughout their adult lives, preferring granite boulder fields that provide shelter and protective snowpacks.

Winter temperatures in the Yukon mountains often go to -40C and lower, yet pikas don’t hibernate. When University of Alberta biologist David Hik began his observations of Yukon pika in 1994, he was worried. In one season, 90 per cent of the pikas that were alive at the end of the summer didn’t make it through winter. What allowed the population to recover, though, was the cold, snowy winter that followed. Since snow is an excellent insulator, the creatures burrow beneath it to keep extreme cold at bay. This allowed the surviving pikas to replenish the population.

But winters are getting warmer in the Arctic and Subarctic. That might otherwise be good news for these exposed creatures, but the higher frequency of warm winters means more rain. The rain turns to ice, and that means a shallow snowpack. Less protection for the pika. Reduced chance of survival.

Things are further complicated by the fact that the northern mountains where pikas live tend to have a bit of a “double whammy,” Hik says. Not only is the Arctic warming at about twice the global average but mountains are also warming more rapidly than low altitudes in what is called “elevation-dependent warming.”

We’ve also lost millions of square metres of snow cover in North America in the last 30 years, according to Scott Williamson, ’99 BSc(Spec), ’07 MSc, a post-doctoral fellow involved in research on elevation-dependent warming.

So what does all of this mean for pikas? They are listed as a species of special concern by Environment Canada but the real future of the pika lies in how the creature adapts — and how quickly — to increasing changes to their habitat and more extreme conditions.

“Right now we are moving outside the normal conditions of the past 10,000 years,” Hik says, “and we don’t know how quickly species will be able to change and adapt.”

These challenges are an opportunity to understand how species and ecosystems are going to change in the future. Robust observation and monitoring efforts are essential to understand and respond to climate change. Hik likens it to weather forecasting — we can predict the weather only because of the vast quantity of meteorological data we’ve collected for centuries from around the world. “Things will continue to change. We have to learn how to adapt from species such as pikas,” says Hik. “Species will need to move, adapt or die.”

Hik is optimistic the pikas will find a way to cope. “I’m fascinated by their ability to deal with extreme conditions.” 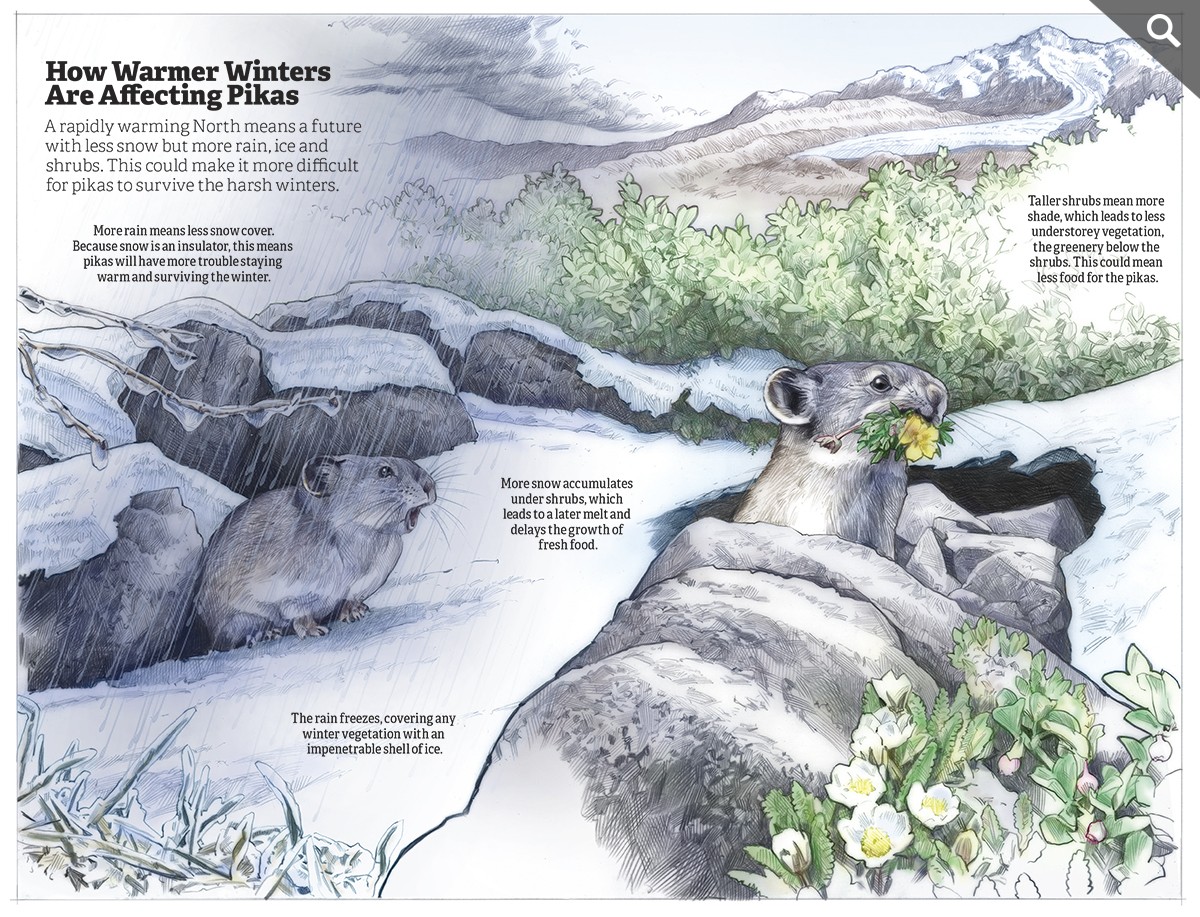 Between 1960 and 2011, most of the Arctic warmed by at least two degrees, more than double the global average.

Why Global Weather is Turning Extreme

What scientists call a “lazy jet stream” can amplify extreme weather. The jet stream, a band of fast-moving air that guides our atmospheric systems (low-pressure systems, storms, etc.), gets its energy from the temperature difference between equatorial regions and, in Canada’s case, polar regions. As polar regions warm more quickly relative to equatorial regions, the temperature difference narrows, weakening the air current. This can stall weather systems, causing long stretches of hot, dry weather or long bouts of rain that oversaturate the soil.

Our Water Supply Retreats With the Glaciers

When U of A biologist David Hik takes students to the mountains every summer, he is witness to their realization that the glaciers are getting smaller by the day.

Part of the melting is due to seasonal patterns, but Hik can see from aerial photos and satellite images over the past 50 years that the glaciers are changing as the climate warms. “Melting glaciers on top of mountains directly affect the freshwater in lakes and rivers downstream,” says Hik. “And melting glaciers also contribute to increasing sea level around the world.

“What happens in the mountains doesn’t stay in the mountains. One of the things we’re learning is that there are strong connections between land and water and weather patterns, locally and globally.”

Ocean currents are linked in a system that carries water around the world, redistributing heat and water like a conveyor belt.

Mountains also function a bit like Earth’s water towers in that they are the major source of water for large populations in lower elevations. As glaciers disappear, the effects on freshwater resources could be severe, says post-doctoral fellow Scott Williamson, who contributed to this study about elevation-dependent warming.

Edmonton, for example, relies on the mountains for water. The city draws its drinking water from the North Saskatchewan River, which originates 1,800 metres above sea level in the Rocky Mountains’ Columbia Icefield. The river usually has flow rates of 355 to 500 cubic metres per second, but in July 2015 it was only 152 cubic metres per second, says Williamson.

“With mountain glaciers and winter snowpack melting faster, there could be much less stream flow in summer by mid-century and this could lead to water shortages for agriculture, industrial and urban use,” he says.

Models suggest this river flow in mid- to late summer could fall by 50 per cent by 2050. This would have serious consequences for the environment, economy and society. 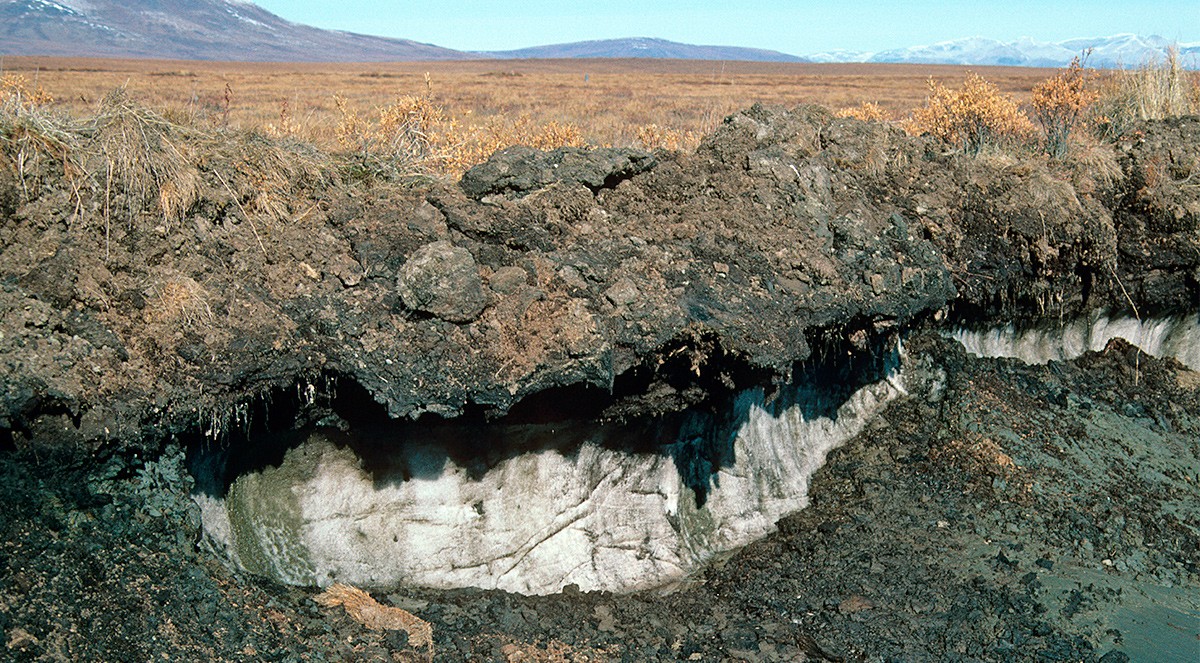 More than half of the Canadian land mass sits on permafrost, soil that stays at or below freezing for two or more years. Most permafrost exists at high latitudes, including the Arctic and Subarctic.

The North’s rapidly warming climate means that, in some areas, ground once as hard as concrete is thawing into a surface with the consistency of mashed potatoes, says Duane Froese, an associate professor in the U of A’s Department of Earth and Atmospheric Sciences. In the Subarctic, infrastructure such as roads and buildings is becoming unstable as the permafrost thaws. The cost to maintain or rebuild these structures hasn’t even begun to be evaluated.

As permafrost thaws, it also releases greenhouse gases. Organic carbon in the ground breaks down, leading to a gradual and prolonged release of carbon dioxide and methane into the atmosphere, according to a 2015 study. David Olefeldt, assistant professor in the U of A’s Department of Renewable Resources, contributed to the study, which concluded that we will need more research in order to understand — and prepare for — the implications. Olefeldt estimates that these emissions could represent the equivalent of five per cent of what humans will emit into the atmosphere during this century.

“There’s a lot of uncertainty, but we think it will be a slow burn over decades and centuries.”

A Life of Extremes