I realized that it’s my job as an adult to stand up for kids. And giving up wasn’t an option.

A long road to justice for First Nations children 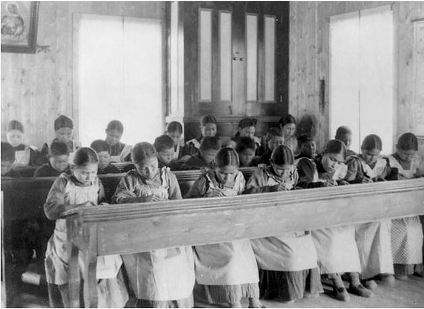 Why one woman refuses to give up and what you can do. 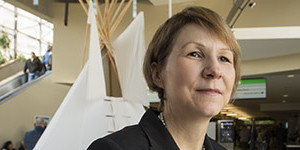 Cindy Blackstock (PhD), Associate Professor, Faculty of Extension has been a child and family services worker for over 20 years, and is a passionate advocate for First Nations child rights. (Photo by Richard Siemens)

Cindy Blackstock pulled on her big winter boots and trudged through the snowy streets of Ottawa to buy a bouquet of brightly coloured flowers. She was going to the cemetery to visit the gravesite of her personal hero, Peter Henderson Bryce.

Under her arm, she clutched an embargoed copy of a Canadian Human Rights Tribunal decision for which she and others had fought for more than a decade. In the frigid cold, she hunkered down by Bryce’s gravesite and read from the 182-page decision, each word lingering in the air.

The ruling was made public 48 hours later, on Jan. 26, 2016. In a legally binding decision, the tribunal ruled that the federal government was discriminating against 163,000 First Nations children on reserves by spending far less on social services than is spent off reserve — effectively denying services and creating “various adverse impacts for many First Nations children and families living on reserves.”

The tribunal also compared the current situation for First Nations children to the impact of the residential school system.

Who was Peter Henderson Bryce?

If you haven’t heard of Bryce, you’re not alone. Like many other Indigenous rights pioneers, his name won’t come up in your average social studies class.

Bryce was hired as a physician by the Department of Indian Affairs at the beginning of the 20th century to report on health conditions of First Nations children in residential schools. In a report written in 1907, he raised the alarm that at least one in four children were dying from communicable diseases, primarily tuberculosis. His recommendations to redress these conditions were largely ignored by the federal government and his report received little public attention, but Bryce later published his findings in a 1922 book titled, The Story of a National Crime.

In 2007, a century after Bryce’s report, Blackstock and her colleagues at the First Nations Child and Family Caring Society and the Assembly of First Nations filed the human rights complaint against the federal government’s treatment of children and families on reserves.

“No path toward justice — particularly with something like this, where racism has been so embedded in our nation for so long — has ever been trodden by just one person,” says Blackstock, an associate professor at UAlberta.

“It’s always been one person’s efforts building upon another, in community with many others. If you’re lucky, you end up in a moment that’s a turning point.”

More kids in care than during residential school era

In the human rights complaint and since then, Blackstock and her allies present some stark numbers.

Despite a decade of effort and several attempts by the federal government to have the case dismissed on legal technicalities, Blackstock’s resolve to see the case through never wavered.

“I just realized that it’s my job as an adult to stand up for kids,” she says. “And giving up wasn’t an option.”

What the ruling says

The decision by the Canadian Human Rights Tribunal calls on the government to:

Jordan’s Principle stipulates that a First Nations child must receive necessary medical attention without delay, with the question of which government body pays resolved later. It was named in memory of Jordan River Anderson, a First Nations child born in 1999 with a rare neuromuscular disorder that required him to be hospitalized from birth. As the Manitoba and federal governments negotiated for two years over which was financially responsible for home care costs, Jordan passed away in hospital at the age of five — never having lived in his family home.

Blackstock says she won’t celebrate her victory until she sees concrete action.

So far, she isn’t impressed. Neither is the tribunal: on April 26, it issued an updated order asking for a clear action plan and giving the federal Department of Indigenous and Northern Affairs two weeks to implement Jordan’s Principle. The government has since agreed to address gaps in applying Jordan's Principle to ensure equal health care access for First Nations children, but it remains to be seen how individual cases will be handled.

The Liberals committed in its 2016 budget to invest $634.8 million in child welfare on reserves over the next five years, starting with $71 million in the first year. Blackstock believes this falls far short of what is needed to carry out the tribunal’s decision and achieve justice for children.

“Children are absolutely worth the money,” she says. The World Health Organization says for every dollar a government spends on a child, it can expect to save 20 dollars downstream because healthy kids turn out to be healthy and productive adults, she explains. “So if the government doesn’t take the ethical reasons seriously, they should at least take the economic reasoning seriously.”

Although Blackstock is disappointed with the government’s response so far, she remains hopeful for the future. “Governments don’t create change. They react to it. When it comes to First Nations children, my best hope has always been in caring Canadians.”

What you can do

Blackstock suggests a few things you can do to support the rights of First Nations children and ensure the tribunal’s ruling is implemented to the fullest extent.

The story in headlines

A long road to justice for First Nations children