'A monster': one man's battle with mental illness 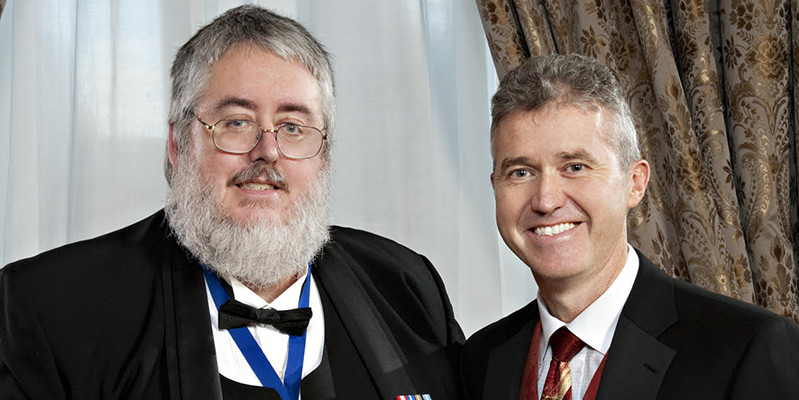 Austin Mardon (left) with Christopher Doig, then-president of the Alberta Medical Association, circa 2010, at the ceremony where Mardon received his Medal of Honour. The Medal of Honour is given to "non-physicians who have made an outstanding personal contribution to the people of Alberta."

Austin Mardon was recently appointed assistant adjunct professor in the Department of Psychiatry. In recognition of World Mental Health Day on Oct. 10 and the University of Alberta’s Giving Day campaign to support student mental health initiatives, Mardon penned a first-person account of his battle to overcome schizophrenia. Mardon is the recipient of the Order of Canada, and the Alberta Medical Association’s Medal of Honour, among much other recognition. His speeches can be found on YouTube; his website is www.austinmardon.org and he welcomes email correspondence. Below is his story, in his words.

Most of the people reading this will remember well their first trip past the Department of Psychiatry sign at the U of A. It will be the memory of their first day on the job, on a psychiatry rotation, or as a psychiatric resident. Walking across that threshold would have been with a feeling of excitement or anticipation. My first trip across that threshold was on a gurney. Even while shaking in a psychotic state, when I saw that sign, I began to cry. I was sure my life was over. I am pleased to say I was very wrong.

Schizophrenia runs in my family. My great-grandmother had it. My Mother has it. I had a cousin who committed suicide with it. I have it. I feel like I have lived my entire life under the shadow of this illness. I suppose growing up with a mother with schizophrenia made me determined to take my medication. I have never consciously gone off my medication. I have missed it a few times accidentally because I fell asleep too soon, or was traveling. This makes me very rare, not just for those with mental illnesses, but in general. A large percentage of the population doesn’t take prescribed medication as directed.

One crucial factor in staying on psychiatric medication is to find a reason to stay on the medication. We have to find a reason to stay sane, to want to get up in the morning, being willing to endure the horrible side effects of the medications, a reason in short to live. For me, that reason was volunteering, which eventually led to advocacy for those like me who can’t speak for themselves. The stigma we live with makes it very difficult to publicly acknowledge that I have this illness. It infuriates my family to have our family name publicly linked to this condition. I’ve had social workers tell me that I’m a monster because of it. The only way to fight the stigma we live with is through education. Sometimes that means a person at a time.

Every person who meets me, every person who hears me and my wife speak publicly about schizophrenia, and every person who reads one of our articles, is exposed to the real illness, not the Hollywood stereotype. People think that we are scary and dangerous. In fact, we spend our lives afraid of our own shadows, unable to trust our senses. We have made it our mission to speak to every student studying social work, psychology, nursing, and medicine in an effort to not only prepare them to work with people like me, but also as a service to my fellow sufferers. It can take an emotional toll on us to force ourselves to ask for help, and when we do, it’s important that the caregivers don’t scare us off.

My grandfather and my father were both college professors. By this time in my life, I was expecting to be the same. Sometimes life is what happens to you when you are making other plans. I am so very grateful to the University of Alberta for giving me the opportunity to serve as an adjunct professor. It has fulfilled a lifetime dream and given me back something that my illness took away.

'A monster': one man's battle with mental illness
Newsroom