A nod from Royal College 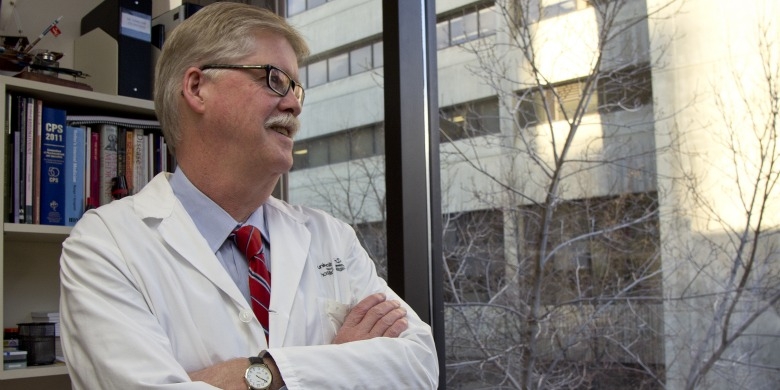 (Edmonton) A physician from the Faculty of Medicine & Dentistry has joined some select company among top western Canadian doctors.

Dr. Peter Hamilton, from the Division of General Internal Medicine, is the recipient of the 2011 Prix d’excellence from the Royal College of Physicians and Surgeons of Canada. The award recognizes a fellow’s long-standing commitment to the health and well-being of individuals and society through ethical practice, profession-led regulation and high personal standards of behaviour.

“I’m very flattered that my colleagues would nominate me for it,” said Hamilton, director of the faculty’s Integrated Clinical Clerkship program, who previously spent more than a decade overseeing residency and postgraduate education programs in the faculty and Department of Medicine.

“Nothing like this happens in a vacuum. When you’ve got people around you that make things happen—support staff, secretarial staff, colleagues—I never could have achieved any of this on my own.”

Looking through the list of past recipients, Hamilton said he feels humbled to join a “who’s who” list of Western Canadian physicians like Phil Gordon, the former chair of Laboratory Medicine and Pathology, who was “a great mentor,” and the late E. Garner King, another mentor and former chair of the Department of Medicine.

“Garner King was one of the most amazing doctors I’ve ever met in my life,” Hamilton said, recalling how during his residency he was paged to the chair’s office—an intimidating experience to say the least. After several minutes fretting about what he did wrong and whether he was fired, Hamilton was floored when King offered him a job.

“That’s how I ended up working here as a faculty member in 1990, because of Garner King, so sharing the same honour is quite amazing.”

McMurtry and Padwal were residents during Hamilton’s time as program director, and in their nomination letter the trio praised him as a mentor and example “for a generation of young clinicians.”

“He really advocated for the trainees when he was in charge of that program,” McMurtry said. “He made sure rotations were excellent and went to bat to make sure trainees got their training program of choice after completing their core internal medicine program. He is an excellent example for young people to emulate.”

Always a teacher, Hamilton currently works with third-year medical students while they are based in 10 rural Alberta locations, providing supervision and mentorship through online teaching. He uses wikis to post weekly patient cases so students log on and discuss treatment options, all while experiencing the advantages of a career in rural Alberta.

“In terms of online teaching and using wikis, it’s absolutely cutting edge,” says Hamilton. “I think this is the future, I really do.”

Seeing learners flourish and become skilled physicians continues to be the highlight of his career.

A nod from Royal College
Newsroom