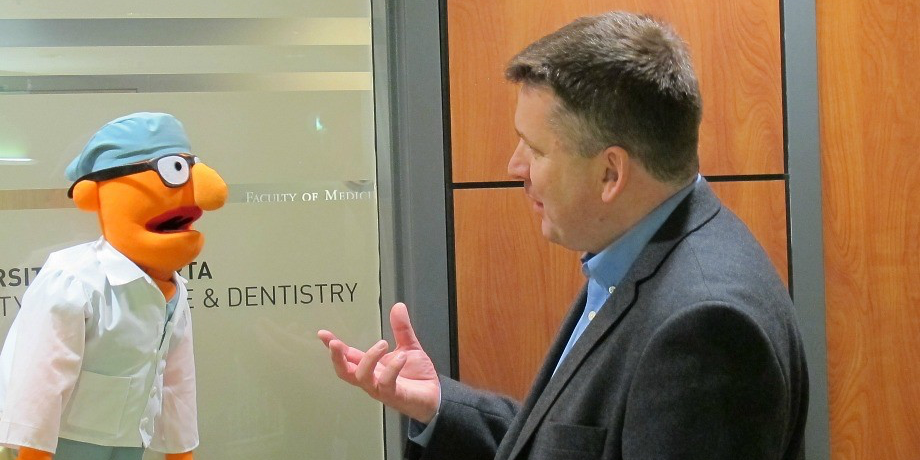 Jonathan White never thought more than 1.1 million people worldwide would hear him say the words, “Welcome to Surgery 101!” But then, he never thought he would work closely with a pair of Muppets either.

As the University of Alberta's Surgery 101 podcasts and app near 1.2 million downloads, White wanted to do something a little different to keep his growing audience informed and entertained. A survey revealed that 75 per cent of the app’s users wanted videos, and a "rainbow connection" led to the creation of Dr. Scalpel and surgical resident Thumbs—licensed Muppets named after surgical tools. In each episode, the happy-go-lucky Muppets teach medical students about surgical practice.

“People engage with them because it’s a common cultural touchstone. How can you not like this guy?” White said in reference to Thumbs, the orange Muppet who is a third-year surgical resident in the Faculty of Medicine & Dentistry.

The first episode of Muppet Surgery, released in January 2014, introduces medical students to what they can expect when they begin their surgical rounds. Thumbs and Dr. Scalpel, ready for the operating room in their standard-issue scrubs and white coats, help debunk rumours about surgical rounds based on real tweets from medical students.

One of White’s favourite things about the app is how users foster its growth through the Surgery 101 Network, a forum where users submit their ideas for future episodes. In one case, a subscriber in Australia created an anatomy podcast with accompanying PowerPoint slides. When a request comes from a U of A student, White pairs the student with a specialist physician on staff and challenges the duo to create a podcast. The product is a learning tool and the student gets one-on-one interaction with an expert.

“If it’s in our area of expertise, then we’ll make an episode,” said White. Neurosurgery, urology and islet transplant—a procedure pioneered at the U of A—are a few of the specialty topics offered in the podcasts.

His approach to accessible surgical education has garnered popularity with medical students worldwide and with his colleagues: earlier this year, White was named a 3M National Teaching Fellow, Canada’s highest honour for post-secondary undergraduate teaching.

Seven episodes of Muppet Surgery have been released this year, and a team of summer students is preparing to make more. Future videos will centre on pop-culture themes such as zombies, science-fiction movie series and LEGO.

Each episode is filmed at the Royal Alexandra Hospital with the support of Alberta Health Services and students in the Digital Media and IT program at the Northern Alberta Institute of Technology.

The Surgery 101 podcasts can be downloaded for free through iTunes. The app is available for iOS, Android and Windows Mobile operating systems for $0.99. Yearly subscriptions cost $4.99 and include episode notes and bonus material. All proceeds from the app go to funding the Tom Williams Endowed Chair of Surgical Education.