A scholar and a steward of the North 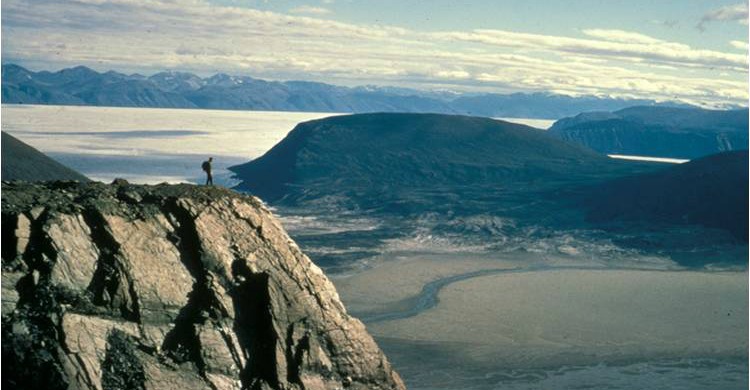 121025-johnengland-banner
John England in June 1971, standing on the cliffs of the outer Hazen Plateau on Ellesmere Island, silhouetted against the sea ice on Lady Franklin Bay.

(Edmonton) As the University of Alberta’s Department of Earth and Atmospheric Sciences celebrates its 100th year, one of its longest-serving professors is looking back at his 47 years of Arctic research.

It was 1965 when U of A professor emeritus John England first set boots down on the tundra of Canada’s far north. He says the opportunity changed his life.

“Talk about Elijah being taken away on a fiery chariot, that was me going to the Arctic,” he said.

England’s research focused on the Arctic’s environmental variability, which he measured by hiking thousands of kilometres of coastline across the Canadian Arctic Archipelago as well as northwest Greenland.

Through the years, England and a revolving team of graduate students put together a diverse record of environmental change in the Arctic, including the history of former ice sheets, related sea level changes

“In the summer of 2008 I sat on the coast of northern Banks Island looking out across M’Clure Strait, a 70-kilometre-wide channel,” said England.

“Only four summers earlier I could have walked across thick sea ice covering that channel all the way from Banks Island to Melville Island. Now it was completely gone.”

England’s fieldwork in the archipelago also includes accidental discoveries that would boggle the minds of Las Vegas oddsmakers. Not once, but twice, on rough Arctic terrain, England came across written messages from past explorers to the Arctic islands.

“I was taking a rest and sitting with my back up against a large cairn when I noticed a brass cylinder protruding from the ground near the heel of my boot,” explained England.

“I saw the date—March 10, 1876—below the signature of Captain Stephenson of the HMS Discovery, one of the first British expeditions to northern Ellesmere Island,” said England.

“Here I was, doing my PhD research, and I find this note written by polar researchers about 100 years earlier,” said England. “That polar year was the first time the world was encouraged to engage in scientific discovery of the Arctic and Antarctica. The serendipity and honour of finding these messages still amazes me.”

England’s nearly 50-year commitment to Arctic research was recognized by Canada’s Natural Sciences and Engineering Research Council. A Northern Research Chair (2002–2012) enabled him to complete a transect of environmental change across the entire Arctic Archipelago.

The latest recognition for England’s career comes this November with his induction into the Royal Society of Canada, the country’s oldest and most prestigious scholarly institute.

“Part of stewardship in Canada is intellectual stewardship. And the research that’s being done at the University of Alberta in northern science—including the work I’ve done on paleo- environmental change—is all part of Canada’s responsibility for the Arctic.”

Department of Earth and Atmospheric Sciences

A scholar and a steward of the North