In today’s management framework, the ability to define groups and what these groups are truly made of is very important.

A tale of two subspecies 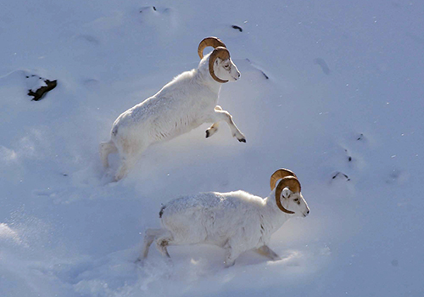 DNA analysis rewrites the story of thinhorn sheep during the last ice age.

Evolutionary biologists studying the lineages of thinhorn sheep have found evidence suggesting that the species diverged hundreds of thousands of years earlier than previously thought.

During the last ice age, most of North America was covered by inhospitable glaciers, forcing plants and animals to seek refuge in ice-free regions known as refugia. In some cases, individuals from the same species were separated in different refugia where they accumulated variances between populations over time, sometimes resulting in the formation of new species.

An iconic symbol of the mountains of western North America, the ancestors of the two dominant varieties of thinhorn sheep were believed to have weathered the last ice age together in the Beringian refugium, which today spans Alaska and the northern Yukon. After the glaciers melted some 10,000 years ago, this theory posits, the species diverged into the white Dall’s sheep and the dark Stone’s sheep that we know today.

When scientists looked into the DNA of both subspecies, however, they found it told a different story.

“The separation is hard to date, because with glaciation, fossilization is a hard thing to achieve,” explains Sim Zijian, PhD candidate in the Department of Biological Sciences and lead author on the study. “Traditionally when you’re trying to figure out what species came first and how they split, you use fossils. But that’s not possible here because these sheep live on top of mountains, where it’s rocky. Fossils just don’t form on rock.”

Instead, scientists turned to genetics, conducting a phylogenetic study—the study of lineages—into both subspecies of sheep. Looking at samples of modern animals, they found that, based on how the lineages were split, the division between the light-coloured Dall’s sheep and the dark Stone’s sheep is deeper than would be expected if they had both survived in the Beringian refugium. The findings support the idea that there was likely a second smaller refugium located south of Beringia that sheltered one of the two thinhorn groups through the glacial advance.

“We used to think they were all in one place. Now we think they were in two places, and based on the typology of this phylogenetic study, we can show that it is this survival in different refugia that gave rise to the two different subspecies that we see today,” says Zijian. “So that gives us the confidence to say that one subspecies, in this case the Stone’s sheep, probably survived in that smaller ice-free refugium.”

The findings will be reflected in an update of the subspecies distribution map, which includes a third, somewhat more nebulous group known as Fannin’s sheep, which can vary dramatically in colour from mostly light to mostly dark.

The answer, it turns out, is none of the above. Fannin’s sheep are a hybrid of Dall’s and Stone’s sheep—a product of the two subspecies reuniting following their separation over the last ice age.

Though this may seem like a relatively small takeaway, Zijian emphasizes the importance of maintaining an accurate picture of subspecies distribution. “In today’s management framework, the ability to define groups and what these groups are truly made of is very important,” he explains, adding that having clearly defined groups is critical when establishing conservation frameworks.

The study, “Genome-wide set of SNPs reveals evidence for two glacial refugia and admixture from postglacial recolonization in an alpine ungulate,” was published in Molecular Ecology. Samples for the study were provided in part by hunters and hunting outfitters. The study was supported by the Yukon Department of Environment, the BC Ministry of Forests, Lands and Natural Resource Operations, the Wild Sheep Foundation, the Wild Sheep Society, and the Habitat Conservation Trust Foundation of BC.

A tale of two subspecies
Newsroom