A trailblazer for social justice in Alberta and beyond 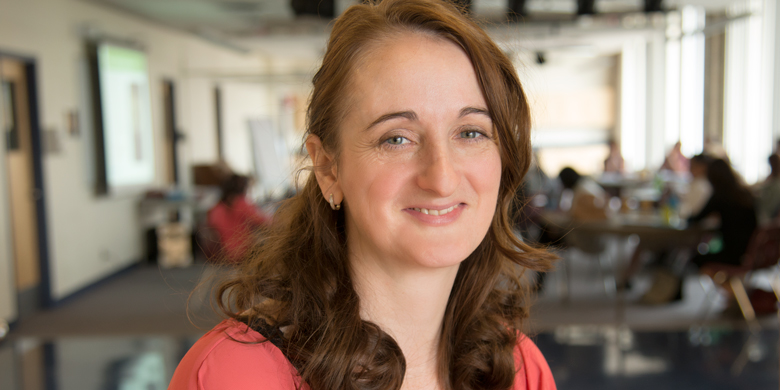 (Edmonton) Renée Vaugeois considers herself shy, but that doesn’t stop her from speaking out for what is right.

As a local leader on the human rights scene, Vaugeois has been steadily blazing trails for social justice, partnering with the University of Alberta to advocate for marginalized people here at home and internationally.

Her passion for the underdog has earned her the UAlberta Advocacy Award, one of three inaugural Community Connections Awards being given as the U of A celebrates the dedication of its campus citizens to the larger community.

Vaugeois, who earned a master’s degree in political science from the U of A in 2004, will be honoured in a noon-hour ceremony May 23 at Edmonton City Hall as the university recognizes the above-and-beyond contributions made to Edmonton by U of A people and partners.  Vaugeois joins two other recipients: Community Scholar Award winner Lola Baydala and Community Leader Award winner Sharon Morsink. Everyone is invited to RSVP to attend the event.

As executive director of Edmonton’s John Humphrey Centre for Peace and Human Rights, founding Canadian president of the Ainembabazi Children’s Project  and co-ordinator of numerous rights initiatives with the U of A, Vaugeois leads the way in promoting tolerance and understanding among Alberta’s diverse population.

Edmonton was, through Vaugeois’s work with the United Nations Development Program, one of the first eight communities in the world and the first in North America whose citizens pledged to promote human rights through education and learning. That led to several initiatives in the community, including programs in youth leadership and human rights facilitation run through the John Humphrey Centre and attended by everyone from oil-company employees and social workers to post-graduate students. “They take what they learn here and apply it to their communities.”

And when she sees people have that “Oh moment” of realization about understanding another culture or person, she feels rewarded. “You realize there’s a shift, and it is a transformative learning moment.”

A small-town girl who grew up challenged by her own share of unfair treatment, Vaugeois became “a bit of a challenger myself; I didn’t feel people had to be abused in any way. I would run sit-ins in high school and managed to always get people behind me.”

That energy still crackles as she continues to get people behind human rights causes; she works to bring together the vital public policy, community and academic sectors—including the U of A—to promote must-have conversations about fairness and equality for all Albertans.

“We can never come to solutions in our community unless we have collective wisdom. The U of A plays an integral role in that.”

Under Vaugeois’s guidance, the John Humphrey Centre has collaborated with U of A departments and institutes to host several events, including an international youth assembly on water issues and a conference on multiculturalism. An upcoming conference this summer focuses on health and will bring to campus 400 youths from around the world.

U of A students also team with Vaugeois to spread awareness and make a difference as global citizens. They support the Ainembabazi project as interns, travelling to Uganda to serve vulnerable children there, and international students contribute their insights for lectures on development and poverty.

“A lot of students from the University of Alberta really drive these issues today.”

While still a student at the U of A, Vaugeois left her own mark by helping to start a certificate program in Peace and Post-Conflict Studies.

She feels “very humbled” at being chosen for a Community Connections award and looks forward to continued partnership and growth with the university.

“Everybody I work with at the U of A, their hearts are in the right place and we make things happen.”

A trailblazer for social justice in Alberta and beyond