A vision of their own 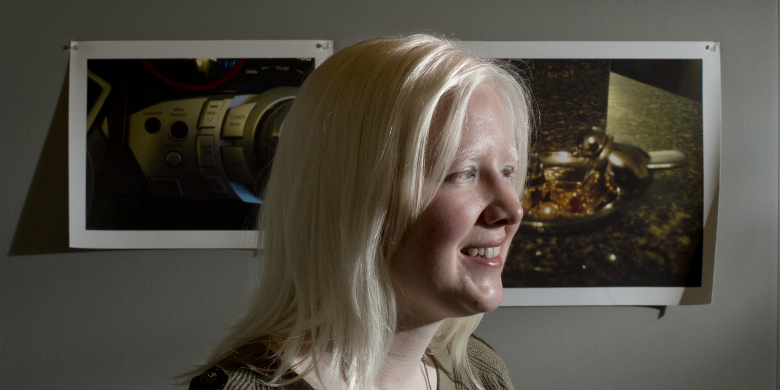 120503-kaylawhitney-banner
Kayla Whitney, an arts student at UAlberta, is sharing her perspective in a new exhibit of snapshots by blind and partially sighted photographers.

(Edmonton) Denise Hambly can’t really see the photographs she’s taken, but that doesn’t quell her excitement for their beauty.

Legally blind since the age of 24, Hambly, who has macular degeneration, doesn’t consider creativity the sole domain of sighted people.

“There is real value in the idea that if we all have a creative bent, our artistic ability isn’t in our hands or eyes, it is in our brains and it is up to us to interpret what is around us and give it to other people.”

Hambly and nine other blind or partially sighted amateur photographers from across Alberta, Canada and the world, have done just that in an exhibit opening at Rutherford Library South May 3. In Focus, a collection of 60 works, shares snapshots taken by the group of the everyday world around them.

The exhibit kicks off a one-day symposium, Materiality and Independence, hosted by the U of A’s Material Culture Institute May 4, exploring the environment of people with disabilities, issues of independence and the ways they engage with material objects.

The show features interpretation of public and private spaces through the perspectives of blind and partially sighted citizens.

“In Focus is about putting a different lens on the built environment,” said Megan Strickfaden, an assistant professor in the Department of Human Ecology.

Strickfaden put out a call for photographs through the Canadian National Institute for the Blind (CNIB), asking the group’s clients for perspectives on urban spaces, including buildings, parks, streets, rooms and objects.

“Lighting and contrast are significant for someone who has vision loss, so the way the camera is targeted is quite different,” Strickfaden said. “Sighted people will be really surprised at the quality of the photos, at the use of symmetry and playfulness.”

Kayla Whitney, a U of A arts student, has four photographs in the show, displaying a winsome personal side (a beloved jewelry tree holding her treasures) and her perspective of being partially sighted (an extreme close-up of a soup can to read the label).

Whitney, 22, is legally blind, but she considers herself fortunate that her sight, though blurry, does allow her to see light, contrast, shapes and colours. She used a digital camera and a simple point-and-shoot method to capture her shots. Though she prefers creative writing or knitting as an outlet, she didn’t want to pass up the chance to try photography for the show.

“Because we are visually impaired, we do see the world differently. We walk down the street differently, or take longer to read school material. I hope people realize there are different viewpoints, different options, that the world is not necessarily just the way they see it.”

Hambly, who works as a life skills instructor for CNIB, knew she wanted to take part in the project.  “I thought, ‘I like photography and I have some pictures I’m happy with.’” Using her camera phone, iPod and a trusty camera, she gathered images in the course of daily life.

Fence lines are a particular favourite for Hambly, who has no central vision and is losing the ability to see colours. “When I was a child we travelled to Saskatchewan a lot, so I was used to seeing a lot of lines.” One of her favourite pictures is of a wire fence she shot while on holiday in British Columbia. The fence was a work of art, embedded with wood and cast-iron pieces. “Every panel had different things.”

“One of the things I love about the photos is that they really show that lived experience, and that’s what will connect with sighted people, because they will see a similar kind of lived experience.”

In Focus also features items related to blindness, such as canes, eyeglasses and glass eyes, tools used for everyday living, both now and in the past. Articles on loan from the U of A’s collection include pointed cat-eye glasses from the 1950s and driving goggles from 1895.

Hambly hopes that the photos demonstrate that blindness is not a barrier to creativity.

“I’m hoping that those who see the show realize that people who are blind or partially sighted can do just about anything sighted people can do; they just have to do it in a different way, and that includes photography.”

In Focus runs until May 30, 2012, and can be viewed in Rutherford Library South.

A vision of their own