A week for a better world 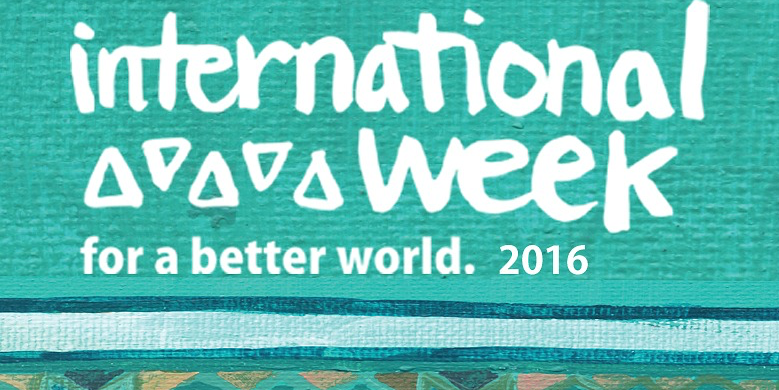 International Week 2016 features more than 50 events running January 25-31. This year's theme is tied to the UN's new Sustainable Development Goals to achieve by 2030.

Wipe out poverty. End hunger. Build peace and justice for everyone, all by 2030. These are ambitious global goals set out by the United Nations, but how are they attainable here at home?

This question and many others are up for discussion during the University of Alberta’s 2016 International Week. The annual event, featuring more than 50 presentations, exhibits and panels across North Campus and Campus Saint-Jean Jan. 25 to 31, explores the UN’s new Sustainable Development Goals, a 17-item list of top priorities released last September to eliminate dire poverty, fight inequality and deal with climate change.

Through the U of A’s Community Service-Learning (CSL) program, class after class of students from various faculties have been touching on many of the goals in the work they are already doing, said Jill Flaman, program co-ordinator for CSL.

“In many small ways, the community projects our students take part in do address some of those sustainability goals. We work with approximately 200 organizations in the community, and I could probably match each one of them individually to the UN’s 17 goals,” Flaman said.

U of A students, instructors, community program representatives and the public can learn more about how CSL is delivering sustainable development locally by attending a panel discussion Jan. 27, as part of I-Week’s lineup.

“The organizations the university works with are aimed at sustainable development goals, whether it’s through addressing hunger by researching food deserts, or helping create equitable education through after-school tutoring,” Flaman noted. “Students are definitely contributing locally.”

Sanaa Mohammed, a Faculty of Arts student who tutored school children at the Edmonton Mennonite Centre for Newcomers through her CSL work, will take part in the panel discussion and is eager to share what she learned.

By helping with their homework and playing games with the children, “we helped them develop their social skills, we developed a close bond, and it makes a difference in their lives. It makes the child a better person, and one better person can contribute to making a better world,” Mohammed said.

Global citizens in the community

The UN’s focus on sustainable development was chosen as the 2016 theme for I-Week to help bring its significance home to Albertans, said Nancy Hannemann, director of global education for University of Alberta International, host of I-Week.

“We hope people who attend I-Week get a deeper understanding of global issues and have the opportunity to engage in discussion about solutions and how that can inform their daily lives and the actions they take as global citizens. I-Week is about creating a better world, and it’s important to think about what it means to be a global citizen in our own community,” Hannemann noted.

Other I-Week highlights include a keynote address by human rights advocate and leader Stephen Lewis, who speaks Jan. 29 about the implications of the sustainable development goals for Canada and the world.

“He has his pulse on the issues of sustainable global development, including gender equality and the establishment of benchmarks, a new aspect added into the mix of UN goals,” said Hannemann. “He’s going to have some focus on this development.”

I-Week also includes keynotes by Inuit advocate Sheila Watt-Cloutier, who will draw attention to the human toll climate change is taking in Canada’s Arctic. “It is really affecting the lifestyles and livelihoods of people in northern Canada,” Hannemann said.

Leading children’s rights activists Marc and Craig Kielburger will also be speaking, sponsored by the U of A’s Peter Lougheed Leadership College.

And the pressing issue of Syria’s refugee crisis will be explored, both through the lens of current conditions in the Middle East and locally, on how Edmonton is settling its newest citizens. The week is rounded out by a music concert benefiting the Edmonton Mennonite Centre for Newcomers, which is playing a pivotal role in welcoming Syrian refugees.

A week for a better world
Newsroom