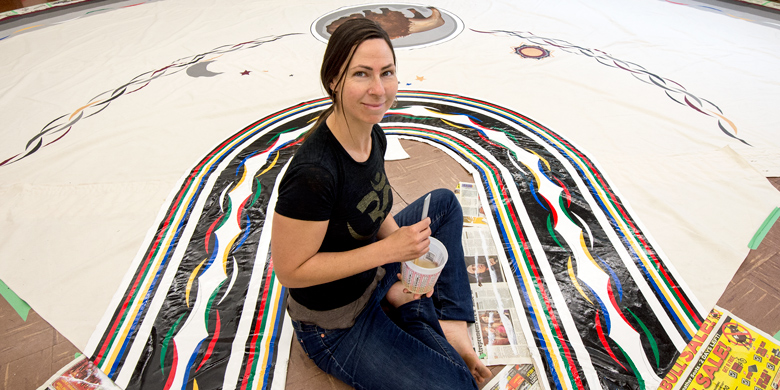 130925-kristine-wray-tipi-banner
Kristine Wray paints the tipi that will be raised Sept. 27 to commemorate the 25th anniversary of UAlberta's Faculty of Native Studies. (Photo: Richard Siemens)

(Edmonton) Some of the University of Alberta’s leading Aboriginal institutions and programs celebrate major milestones this fall as they mark years of service to their communities and students.

The Faculty of Native Studies raises a tipi Sept. 27 to commemorate its 25th anniversary, while the Faculty of Education‘s Aboriginal Teacher Education Program (ATEP) marks 10 years in October. Both are a source of deep pride for the U of A, said Martin Ferguson-Pell, acting provost and vice-president academic.

“The success and longevity of these initiatives shows the commitment the U of A has to indigenous education, from academic instruction to policy development and beyond, to touch the lives of many in communities throughout Alberta, nationally and internationally,” he said.

Since first being floated as an idea in 1972, the Faculty of Native Studies—which remains the only one in Canada since becoming a faculty in 2006—has established a legacy as a place of growth, empowerment and knowledge for all of its students, said Brendan Hokowhitu, faculty dean.

“The Faculty of Native Studies has, since its inception, been instrumental in opening up conversation and a deeper knowledge of Aboriginal issues,” Hokowhitu said. “Our graduates, whether they are Aboriginal or non-Aboriginal, leave here with enriched perspectives as they journey through their lives and careers.”

Kristine Wray, who was the first to graduate in 2006 with a BA Native Studies/BSc Environmental and Conservation Sciences degree, remembers often being amazed throughout her classroom journey.

“Learning about Canada from the Aboriginal point of view, I walked out of class every day thinking, ‘I didn’t know that.’ I wish everyone on campus would take a native studies class.”

Wray, who also holds a master’s degree in rural sociology from the U of A and works as a research co-ordinator in the Faculty of Native Studies, is also an artist, and is painting the tipi that will be raised this week in front of Pembina Hall and blessed through a pipe ceremony.

The tipi bears variations of the faculty’s multicoloured ribbon design and a painting of a buffalo (done by Wray’s fellow artist Dean Watson), an animal deeply entwined with Aboriginal culture and traditions in this part of the country.

Wray says she is honoured to work on the tipi, believing that the work the faculty does is important. “It helps students shift to an increased understanding of Aboriginal Peoples and cultures in Canada.”

The university’s initial program of native studies was approved as a school in 1984 and a full-fledged faculty in 2006.

Today, the faculty has 437 alumni (including distinguished members such as Derek Nepinak, Grand Chief of the Assembly of Manitoba Chiefs), is home to the Rupertsland Centre for Métis Research, and offers several native studies degrees, some of which combine with education and science streams. The faculty also has certificate programs in Aboriginal governance and in Aboriginal sport and recreation (the only one of its kind in Canada). Most recently, a master of arts in native studies was added to the faculty’s offerings.

ATEP: Sowing seeds of teaching and learning in communities

As another dynamic U of A initiative, the Aboriginal Teacher Education Program and its graduates are making a difference in their communities, said Fern Snart, dean of the Faculty of Education.

“We are proud to offer this program from our faculty and to have such strong partnerships with our communities. There are hundreds of students who benefit from ATEP through our teachers out there, and that is our ultimate goal.”

The community-based degree program was started a decade ago by the Faculty of Education to meet an acute need for Aboriginal teachers and teachers with an understanding of Aboriginal histories and perspectives in classrooms, said Angela Wolfe, associate director for ATEP.

“Alberta has a high population of Aboriginal youth, and ATEP graduates are prepared to teach responsively and meaningfully when they have Aboriginal students in their classes, and in Aboriginal communities,” Wolfe said. “The positive effect is immense as our graduates work and contribute in their home communities.”

Partnering with Blue Quills First Nations College, Maskwachees Cultural College, Portage College and Northern Lakes College in Alberta, ATEP has graduated 120 teachers over 10 years, with 97 per cent of them employed in their home communities. The program, which has a retention rate of 90 per cent, stays responsive and tailored to community needs through the insight of elders and site co-ordinators.

ATEP’s success will shine during fall convocation, when the highest-ever number of ATEP grads cross the stage, including a first cohort with master’s degrees, in collaboration with Blue Quills First Nations College.

“ATEP grads are going on to higher education and important roles in their communities,” Wolfe said. “Our students feel valued and fortunate to have ATEP, and in turn, they are highly valued and sought after when they graduate.”

ATEP’s 10th anniversary is being celebrated Oct. 18 and 19 with a conference where alumni and students will present on the theme of coming full circle in teaching and learning.