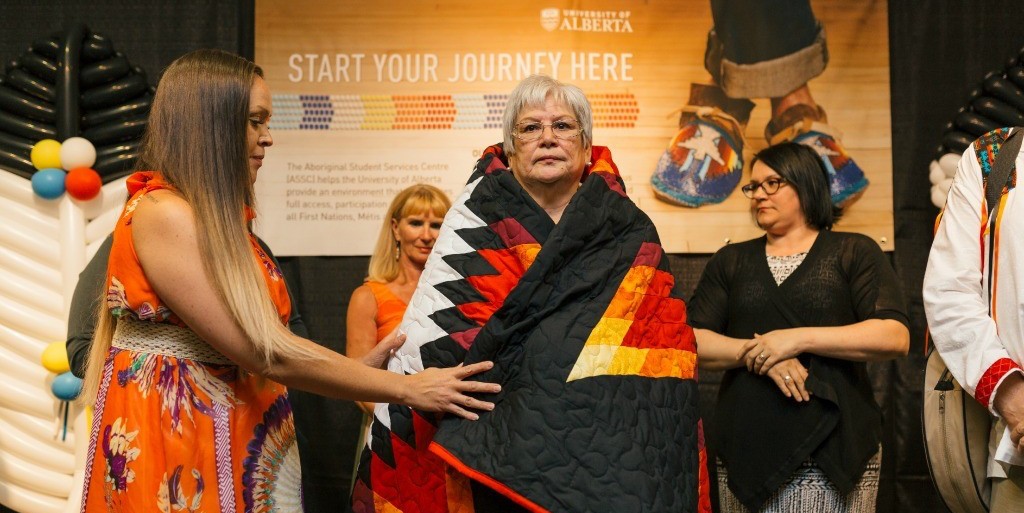 (Edmonton) Shana Dion looks upon the Annual Spring Gathering, which honours indigenous graduates, with particular pride. Dion, director of the University of Alberta’s Aboriginal Student Services Centre, has shared part of the journey with many of the attendees and has seen the perseverance it’s taken to arrive at this moment.

“We stand on the stage for every convocation. Our students are overcome with emotion a lot of times because it is such a long journey and a lot of them never thought they would get here,” she said.

But this year’s gathering, held on June 12 in Lister Hall, was about more than celebrating the class of 2015. It also acknowledged Nov. 15, 1975—the day that the U of A’s Office of the Advisor on Native Affairs, the precursor to the Aboriginal Student Services Centre, opened its doors.

“The name, the programming and the services have changed, of course, but the purpose is the same,” Dion said. “It has always been here to provide academic and cultural support for First Nations, Métis and Inuit students.”

Marilyn Buffalo from the Samson Cree Nation was just 25 years old when she helped found the Office of the Advisor on Native Affairs and served as the first adviser. She spoke at the Spring Gathering about the humble beginnings of the centre at a time when there only 15 Aboriginal students on the U of A campus, and about her insistence that the office expand its focus from student retention to indigenous research and program development.

“We opened up our first office with a $15,000 donation,” Buffalo said. “We met with faculty and staff, senators and committees, and we said, ‘Your institution has to instil some pride and integrity of our people inside, and not just in the Dean of Students Office.’”

Through her work at the U of A from 1975 to 1979, Buffalo laid the foundation for the Faculty of Native Studies and the Aboriginal Students Council, and created a format for all Aboriginal programming on campus, including law, medicine, nursing and teacher educational development. Her tenure also brought her into contact with notable Aboriginal alumni including Chief Wilton Littlechild, Thomas Goodson, Wilma Jackknife and Carl Urion. Buffalo was presented with a handmade blanket at the Spring Gathering in acknowledgement of her contributions.

Allan Tallman, who came from the High Prairie region to attend the U of A in 1976 and graduated with a bachelor of science degree before going on to a distinguished career in Aboriginal affairs with the federal public service, said Buffalo’s office was an important point of contact for Aboriginal students and played a role in fostering his interest in his cultural roots.

“A lot of students who came from smaller communities, they’d never been to the city, and some of them really missed their families and their communities. [The office] provided a gathering place for those students who might not have stayed otherwise,” Tallman said.

“When I came to the U of A I didn’t speak Cree at all, but by being around other students who did speak Cree I began to learn, and that helped get me interested in learning more about my own culture.”

A place to gather, a place to connect

Forty years later, the Aboriginal Student Services Centre still provides a gathering place and sense of connection for the university’s approximately 1,100 self-declared Aboriginal students, from its daily open-door policy to student welcome and orientation, monthly stew-and-bannock luncheons and an annual round dance. Dion, a U of A alumna herself, said she wants to preserve the supports she found as a student.

“I came here from the moment of arrival as a student and I’m thankful that I did,” she said. “I tell students to come to our orientation because they might meet their best friend. There will be someone in that room you will connect with. As long as you have a cheerleader in your life that roots for you, you’ll make it through.”

The centre also provides healthy snacks, tutoring and other counselling, along with access to photocopying, computers and a dedicated space for spiritual practices such as smudging and meditation. And its outreach activities span the campus.

“We’re very connected with faculties that have specific support—medicine, arts, education, native studies and nursing all have a dedicated Aboriginal adviser, and we’re very much connected with them. We do a lot of outreach work with the registrar’s office, especially on Aboriginal student discovery day, and also the Indigenous Health Initiatives in medicine.”

Dion cited the commitment of people like former provost Carl Amrhein and former chancellor Eric Newell, who with his wife donated $1 million toward the establishment of an Aboriginal gathering place on campus, to improving post-secondary access and outcomes for Aboriginal students. She said she’s excited to welcome incoming U of A president David Turpin, whose efforts to improve Aboriginal enrolment and retention at the University of Victoria are part of his legacy there.

“I hope the new president sees the importance of building a gathering place for Aboriginal people at the U of A,” Dion said. “That is something a lot of us are looking forward to.”

On a daily basis, the Aboriginal Student Services Centre continues to support students in what Marilyn Buffalo said is a crucial element of their university experience: “You have to balance your academic training with your traditional knowledge. You must never lose sight of who you are."