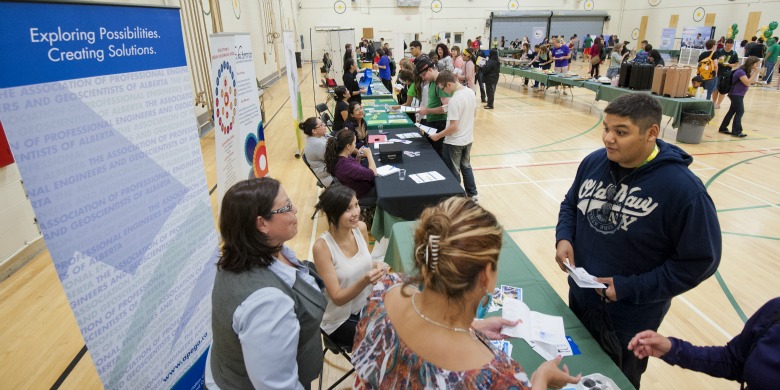 (Edmonton) Christian Guimond grew up believing in volunteerism and helping others, so attending a booth fair as part of his University of Alberta orientation was an exciting prospect for the first-year engineering student.

The 18-year-old, who spent most his young life in the northern Alberta town of Swan Hills, was looking forward to checking out opportunities for personal and community growth as he took part in the U of A’s Aboriginal Week of Welcome event Aug. 31.

Known as TAWOW for short, the event, held in the education building gym, featured snacks, information booths and—thanks to several community and campus donors—250 free U of A backpacks stuffed with student essentials.

Guimond was among hundreds of Aboriginal students who eagerly explored what TAWOW had to offer.

“If I could find anything with the booths that is related to volunteering, especially within the First Nations community, I’d gladly do it,” said Guimond, who tries to follow in the footsteps of his great-grandfather, awarded the Order of Canada for humanitarian service.

Now in its third year, TAWOW welcomes new and returning Aboriginal students and connects them with programs and services that will help them succeed, said Shana Dion, director of the university’s Aboriginal Student Services Centre.

“TAWOW celebrates the arrival of all of our students to campus and invites in many organizations that provide guidance and encouragement, offer a wealth of resources and showcase how our students can be part of the larger community,” Dion said.

The U of A is a community hub as much as it is a school for many of the students, she noted.

“The University of Alberta is not only a place for students to continue their academic journeys, but also a place to invest in with their families, and to call Edmonton home.”

Generous sponsors such as WorleyParsons, this year’s sponsor of the backpacks, help make TAWOW a success, she added.

“You feel right at home”

Ashley Deschambault, a returning student starting her third year of nursing studies at the U of A, says she enjoys the bustling event each year.

“It brings everyone together,” said Deschambault. “You don’t really know how many Aboriginal students there are on campus until you come to this event, and you are blown away at how many people there are.”

TAWOW gives students an opportunity to find new friendships that keep homesickness and loneliness at bay, said Deschambault, who grew up in the northern Alberta community of Fort Vermilion. “You hear other people’s stories of their communities, their similar experiences, and you feel right at home.”

Having that connection is important when coming from a small community to a large environment like the U of A, she added.

“It is easy to get lost in the sea of students and to have a disconnect with your Aboriginal culture, so this event is nice in helping bring you back to your culture and to really get to know other students. Even if you aren’t in the same faculty as they are, you can still see them on campus and have that relationship. Otherwise you may never get to know them, and that person could have been your best friend.”

Deschambault continues to learn something new each time she comes to TAWOW, and especially appreciates the gift of a backpack. She has collected two—one she uses for weekend trips home and one she has given to her younger brother for school. The various sticky notepads, pens and other mini-supplies that fill the backpacks, she tucks into her nursing scrubs and shares with classmates.

The backpacks, issued in black as well as U of A green and gold this year, were sponsored by the engineering, procurement and construction management firm, WorleyParsons. Senior vice-president Gary Bosgoed, who helped hand out the packs, decided to contribute after accepting a tour of campus that included a stop at the Aboriginal Student Services Centre.

“While we were chatting, Shana mentioned the need for backpacks and we offered to fund that for this year. There was a little bit of emotion and hugging at the end of that conversation,” Bosgoed chuckled.

Committed to national Aboriginal community engagement, WorleyParsons wanted to contribute to helping U of A students build their futures and perhaps consider careers with the firm, Bosgoed said.

“This kind of support helps us connect with communities like the University of Alberta, which is where tomorrow’s talented professionals can be found.”

Other sponsors of TAWOW include the City of Edmonton, Métis Child and Family Services Society, Statistics Canada, Institute for the Advancement of Aboriginal Women, New in Town Aboriginal Welcome Service and the Bent Arrow Traditional Healing Society. U of A sponsors include the Faculty of Extension, Alberta School of Business, University Health Centre, Faculty of Nursing, Mental Health Centre and the Department of Medicine, Aboriginal and Global Health Research Group.