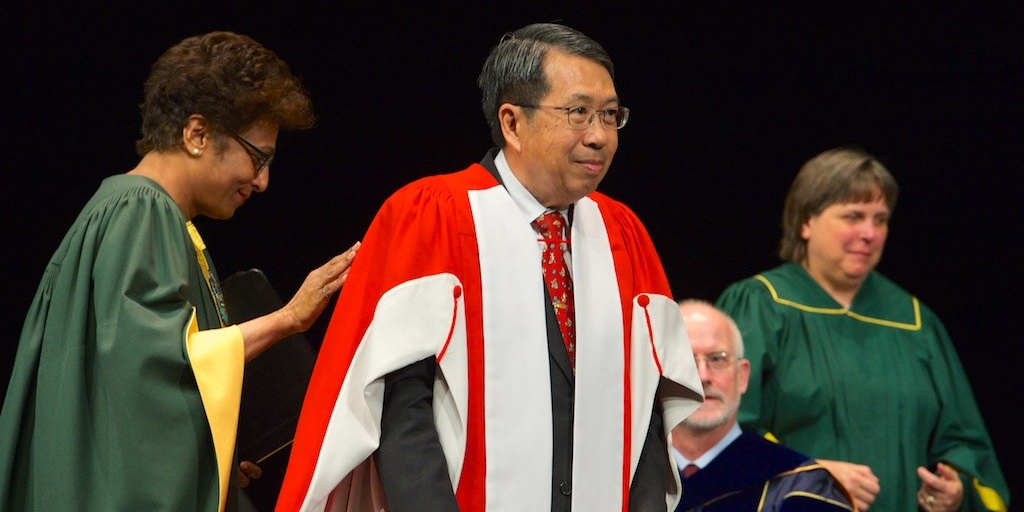 (Edmonton) University of Alberta alumnus Guaning Su—who made immense contributions to military defence in his home country of Singapore and later became president of Nanyang Technological University—urged engineering graduands Tuesday to seize the moment and take advantage of  “tectonic shifts” between East and West.

Reflecting on changes in both Alberta and Singapore since graduating from the U of A in 1971, the honorary degree recipient observed that the global economic centre of gravity has moved eastward and the “rise of Asia is here to stay.”

At one point in his convocation address, Su turned wistful and broke into song, seizing his own moment to resurrect a popular hit of the ‘60s—“Time to Remember” from the musical comedy The Fantasticks, which he said reminded him of his first “green and gold” September. He had just arrived from Singapore, a developing nation with an average per capita income of US$600 per year, full of dreams for a bright future.

And while proud of his engineering degree, he said it was the people he met during his undergrad days that made the deepest impression, endowing him with lifelong friendships.

“My four years as an undergraduate in Edmonton were the best years of my life,” Su told the engineering class of 2015. “Young and full of energy, we dreamt big dreams and strived to succeed. Some of my best friends were made during these four years.

“My Alberta experience was deeply etched in my consciousness, not just because I built a solid foundation in engineering here, but most of all, this was where lifelong friendships were forged.”

After graduating, Su joined Singapore’s defence ministry, where he remained for 30 years as a research engineer. He created a top-level research and development organization—Defence Science Organization National Laboratories—while teaching at the National University of Singapore.

In 2003, he became the second president of the Nanyang Technological University in Singapore. Under his leadership, the university expanded its academic programs and established new schools in humanities and social sciences, art, design and media, as well as a school of physical and mathematical sciences. In recent years he has also served as an adviser to U of A President Indira Samarasekera on the university’s water initiative.

Remembering his student days, he recalled asking a friend to show him life on an Alberta farm. Su was hired as a farmhand, spending six weeks hoeing sugar beets in Vauxhall.

“It was back-breaking work,” he says. “We became very dark under the hot sun. We made friends with Native Americans and were even mistaken to be natives ourselves.”

Su stressed that what matters most in life’s journey are the people who help us along the way, those who “open up your horizons and help you solve the world’s problems.

“Dream big dreams, venture out, tackle grand challenges, explore the global village, slay mighty dragons and achieve world peace. But always remember the people who made this possible and cherish the memories of the University of Alberta and of home.

“Draw on the strength of your loved ones, where the fires of September are burning for you, not just yesterday, not just today or tomorrow, but in eternity.”