For Jane Ash Poitras, receiving an honorary doctor of letters degree from UAlberta was a full-circle moment in her well-rounded life. 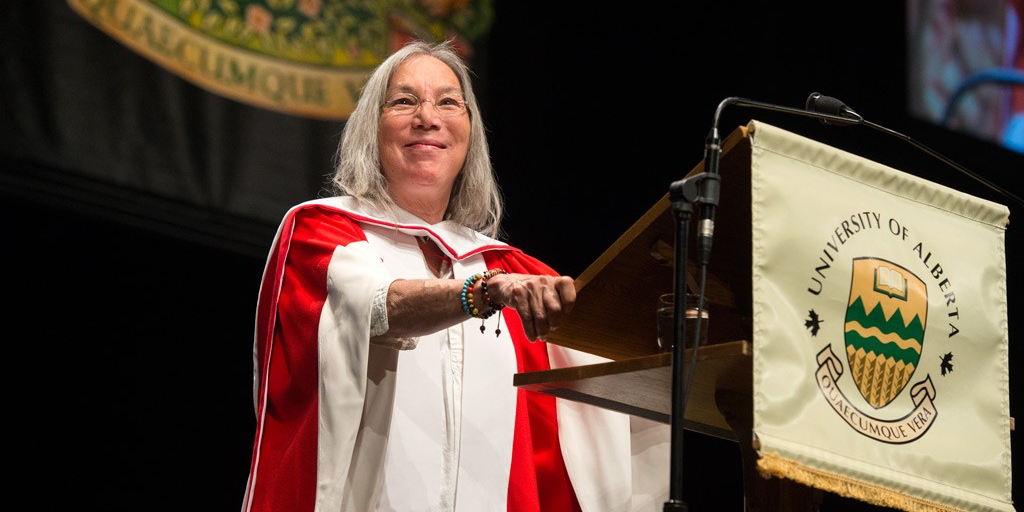 (Edmonton) Internationally acclaimed visual artist Jane Ash Poitras had a difficult start in life by any standard. Born on the Mikisew Cree First Nation in Fort Chipewyan, Alta., she was orphaned at the age of six and adopted by an elderly German woman who found her on the street in Edmonton. When the woman tried to enrol her in school, she was told Poitras was mentally disabled. So the woman began to teach Poitras herself.

“She taught me my ABCs, and that’s why I’m getting this [honorary] degree today—doctor of letters,” Poitras said to applause from the assembled graduates of the University of Alberta’s Faculty of Education and Faculty of Native Studies.

Despite this early hardship, Poitras went on to earn a bachelor of science degree in microbiology and a bachelor of fine arts degree in printmaking from the U of A before receiving her master’s degree in painting and sculpture from Columbia University. She told the audience that she’s taught ethnobotany and microbiology as well as doing her respected creative work.

“I’m a well-rounded person,” Poitras said. “And that’s what I expect of all of you … I expect a lot of you and one day I expect you to stand up here and go through this.”

In addition to having her visual art displayed in collections around the world, Poitras is a recipient of the Lieutenant Governor of Alberta Distinguished Artist Award and the National Aboriginal Achievement Award for Arts and Culture. Her art uses the layering of paint, ready-made images and text to explore issues and ideas related to the Aboriginal experience in North America.

Remarking that the inspirational speeches by U of A President Indira Samarasekera and other speakers had left little for her to say, Poitras reminded grads of the importance of family—however they themselves define it—in helping them make their way in the world. She stressed maintaining connections in ways that go beyond the convenient means presented by the digital realm.

“Don’t forget how to write a letter and put a stamp on it,” she said. “Pick up the phone and tell the people who matter to you that you love them.”

Prior to receiving her degree, Poitras was honoured with a traditional song by noted performer Rocky Morin of the Enoch Cree First Nation. She was previously recognized by the U of A  with an Alumni Award of Excellence.