'Adaptin' to a new biology 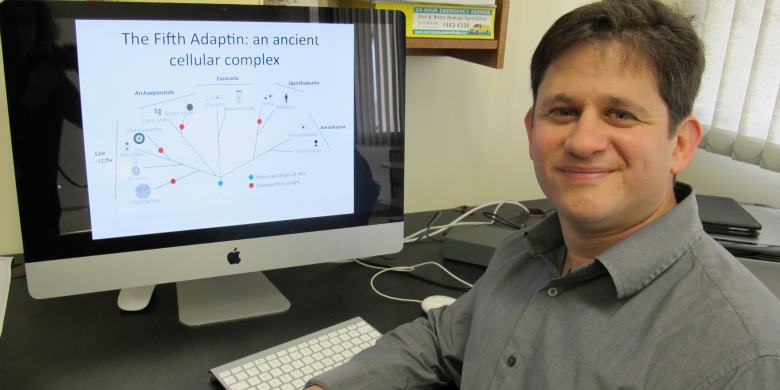 (Edmonton) University of Alberta researcher Joel Dacks and two of his summer undergraduate students, Lael Barlow and Gabriel Casey Francisco, have made a discovery that will mean textbooks need to be rewritten and cell biology researchers worldwide may have to revisit their old experiments.

Inside every cell that isn’t bacterial is a “membrane trafficking system.” It has long been known to have four protein complexes, called adaptins, which are all involved in moving things in, out and around the cell. Joel Dacks, in the Department of Cell biology in the U of A’s Faculty of Medicine & Dentistry, along with University of Cambridge colleagues Jennifer Hirst and Margaret Robinson, have discovered there is a fifth adaptin. According to their research, it has been around for billions of years, but no one has been able to spot it.

“What this does for cell biology is open up a whole new avenue of research,” said Dacks. “We thought there were four big players in the processes of how things got moved around in the back half of the cell. There’s a fifth player on the field; we just couldn’t see it.”

Understanding how trafficking works in cells is vital because when something goes wrong in this system, oftentimes this is when you get disease. Mutations in genes involved in trafficking are implicated in a number of neurodegenerative disorders including Alzheimer’s, Huntington’s disease and amyotrophic lateral sclerosis, also known as Lou Gehrig’s disease.

“We already have one disease where we know where this complex is involved,” said Dacks. It is called hereditary spastic paraplegia, which causes increasing leg spasms and eventually loss of mobility.

“More importantly, the drive behind the study is that to understand the diseased cell, we have to know what a healthy one really looks like. You need to understand the basic map of the cell to be able to identify how it has gone wrong. We have discovered a previously unrecognized major feature on that map.”

Dacks says that this cellular machinery is widespread, not only in human cells but in plants, parasites and algae, meaning it is not only a general feature of many non-bacterial cells but also an ancient one. The more they learn about this fifth adaptin, the more insight they’ll be able to gain about the earliest events – the building of cells.

Dacks thinks this discovery, published Oct. 11 in Public Library of Science Biology, could help many scientists answer questions they may have been left with following their research projects.

“Scientists have to build explanations using the pieces that they know exist. This may help to incorporate some observations that didn’t fit, because now you can explain things with five adaptin complexes not four,” said Dacks.

His research is funded by the Natural Sciences and Engineering Research Council and he is an Alberta Innovates Technology Futures new investigator and the Canada Research Chair in Evolutionary Cell Biology.

'Adaptin' to a new biology
Newsroom