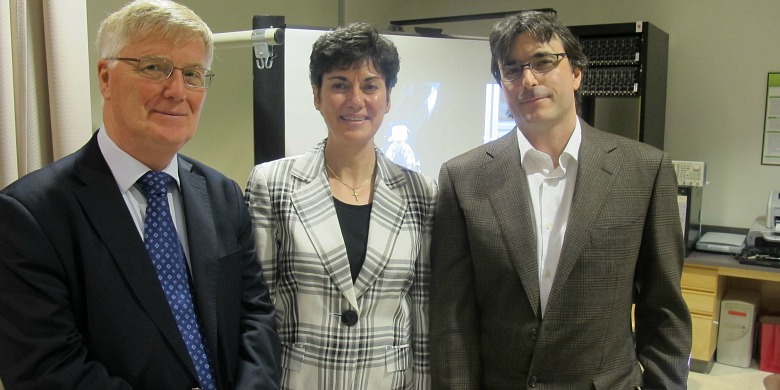 (Edmonton) Medical researchers at the University of Alberta will have one of only five high-tech robotic arms in the world and some of the most powerful MRI scanners in Canada, thanks to millions in federal and provincial funding, and investments from other organizations.

Faculty of Medicine & Dentistry researcher Vivian Mushahwar and her team received more than $3 million in funding from the Canada Foundation for Innovation, and over $3 million from Alberta Enterprise and Advanced Education’s Research Capacity Program, to help establish a Centre for Neural Interfaces and Rehabilitation Neuroscience. A second group of researchers, led by Christian Beaulieu and Sandy McEwan, received $5.5 million in CFI funding and $5.5 million in Research Capacity Program support to purchase new imaging equipment that can be used to better detect and understand cancer, neurological disorders and cardiovascular disease. Beaulieu works in the faculty’s Department of Biomedical Engineering, McEwan is the chair of the Department of Oncology and Mushahwar works in the Department of Physical Medicine & Rehabilitation.

The researchers also received funding from foundations and in-kind contributions that brought the total amount of funding to more than $25 million, with Mushahwar’s team receiving $7.7 million and Beaulieu and McEwan receiving $17.5 million.

“The breakthrough medical technologies being developed by researchers at the University of Alberta will benefit the health and well-being of all Canadians,” said Gary Goodyear, minister of state for science and technology. “Our government’s investment will help the university collaborate with the health sector and take promising ideas from the lab to the marketplace.”

Mushahwar’s research team will use the new equipment to come up with new interventions to restore motor function for people who have neural injuries and diseases, such as stroke, spinal cord injury, limb amputations, Parkinson’s disease or MS, which collectively cost the health-care system $23 billion a year. Mushahwar’s team is well known for inventing devices that interact with and respond to a patient’s nervous system. For example, the team recently developed the science behind robotic arms that provide sensation of touch and position when patients manipulate objects and move their artificial arms in space. The team also developed micro-scale devices that interact with the spinal cord and could restore standing and walking after spinal cord injury.

“What we needed was specialized equipment to let us push these devices into the next generation,” said Mushahwar. “This equipment will allow us to combine smart technology with neuro-rehabilitation. We’ll be one of the few places in the world to do this. We are excited about what we can do to help people with disabilities.”

Mushahwar’s lab is also receiving a donation from Iguana Robotics—a set of robotic legs worth about $120,000. The owner wanted to donate the robotic limbs, only the second set the company has produced, because he believed in the research science happening at the U of A, said Mushahwar.

“Alberta’s long-term commitment to research talent and infrastructure brings new knowledge and technology forward to help Albertans and people worldwide,” said Thomas Lukaszuk, deputy premier and minister of enterprise and advanced education. “Our post-secondary research institutions have established reputations for research excellence that we and our federal partners are proud to support.”

A centre for leading-edge neuroscience

The lab will have three main focuses: device development and biological testing, robotic training and rehabilitation science, and virtual reality testing. On the device development side, the new site means that as engineers develop new inventions, they can ensure the devices fit with the body’s biology by conducting testing on site right away. The site will also have a good laboratory practice facility, which will follow Health Canada’s required testing rules on animal models in preparation to start using those new devices with people.

The robotics part of the site will include the new robotic arm and legs. The robotic arm is one of five developed by a team at Johns Hopkins University. The virtual reality section of the site will allow people with mobility issues to wear goggles that simulate real environments—like walking up a hill, getting out of the way of a car, moving an object out of the way with their arms, or changing speed unexpectedly—yet they’ll be safe inside a lab.

Researchers from the United States, Germany, the Netherlands and the United Kingdom have already made plans to come to the U of A to see the facility and work with Mushahwar’s group to brainstorm about how to improve mobility issues.

Meanwhile, Beaulieu and McEwan’s team will upgrade two pieces of equipment and purchase a new piece of equipment. In the Peter S. Allen MR Research Centre, the 1.5-tesla MRI scanner will be replaced with a 3-tesla MRI scanner, and critical upgrades will also be made to the 4.7-tesla MRI—the second-strongest MRI scanner in the country and one of only two MRIs in the world at that strength. This scanner can generate brain images of unprecedented quality.

“The new MRI scanners are incredibly powerful,” said Beaulieu. “It will allow us to get more signal from the body, to take better pictures and to detect pathology that we can’t detect at lower magnetic fields. Ultimately, it will give us a non-invasive tool to investigate human disease from head to toe.”

The new piece of equipment is a simultaneous PET/MRI scanner for the Edmonton PET Centre at the Cross Cancer Institute. This will allow researchers to study metabolism with the PET technology, while the MRI can measure the structure and function of tissue at the same time. It will be the first of its kind in Western Canada.

Beaulieu noted the specialized scanners are available to researchers across campus. Their current scanners have been used by 103 U of A researchers from 17 departments and seven faculties.

All of the new or upgraded equipment means researchers can continue to do novel experiments, and the faculty will be able to keep and attract the best and brightest students and faculty members.

“We want to continue our technical development and then work with our excellent group of clinical scientists to predict which patients will improve if you give them a certain treatment or therapy. We want to use the new imaging hardware to see if we can better understand what is happening within an individual,” said Beaulieu.