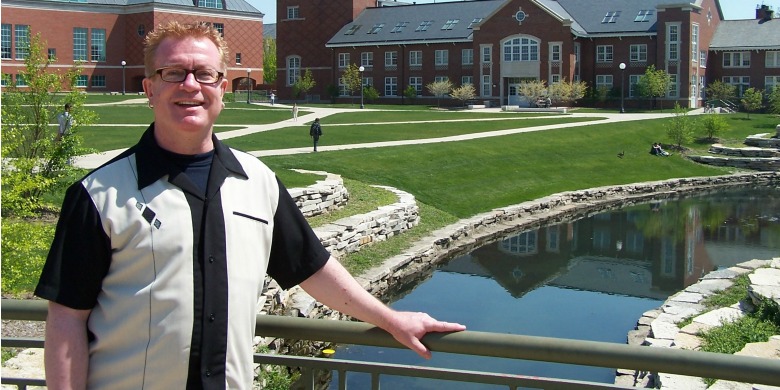 (Edmonton) How much things can change. When André Grace first joined the education faculty in 1999 and focused his attention on sexual and gender minorities, he had to ask city schools if he could make 10-minute presentations on inclusiveness in the classroom.

“Today, it’s totally reversed,” says the recipient of a 2011 Killam Professorship, a distinction that recognizes scholarship, teaching and community service.  The professor of education policy studies and director of the U of A’s Institute for Sexual Minority Studies and Services says that today “we’re almost overwhelmed with requests from schools to do workshops.” The institute now has 10 very busy full- and part-time employees.

This year, Grace’s institute started a Safe Spaces initiative on the U of A campus to improve the climate for lesbian, gay, bisexual and transgendered members of the community. The initiative is already growing “in leaps and bounds,” says the professor of education policy studies. More than 2,000 undergraduates have responded online to its Queer Climate Campus Survey.

So, as you may have guessed by now, community engagement and advocacy lie at the heart of everything Grace does. Even in his teaching, he insists that if his students want to participate in his research program, they must roll up their sleeves and work with city youth.

“Every graduate or undergraduate student who comes with me to do research, I expect them to spend a portion of their time doing work with youth in the community,” he says.

Grace taught high school for years in St. John’s, Newfoundland, before turning to an academic career in the ’90s. He loved the teaching, he says, but soon realized that what was missing in teacher training was basic social and cultural sensitivity.

“Someone can be a fantastic math or science teacher, but my concern was when students are sitting in front of them in a classroom, which students do they see? Teachers are always very comfortable with people like themselves…but I wanted teachers to acquire skills to work with different kinds of students.”

Until recently, the idea of teachers talking openly with lesbian and gay students about issues concerning sexuality was just too difficult to accept, he says. “There was, in the general public, a certain ignorance and fear around working with those students.”

So Grace turned his attention to adult education, researching the best ways to train teachers to support diversity and inclusion in the classroom.  He’s had four consecutive three-year grants from the Social Sciences and Humanities Research Council to build his research program, which focuses primarily on how sexual- and gender-minority youth “grow into resilience.”

Lately, he has added other categories to the mix. “They may be a two-spirit youth�aboriginal and gay�or they may come from a different ethnocultural background or have a lower socio-economic status. What I’m trying to do is, within those groups of youth, find the ones that are thriving and try to figure out, ‘How did this work for them?’”

His institute has recommended to Edmonton Public Schools that every school should have a “safe teacher,” a go-to person for support on issues of sexual identity. “The biggest thing in any youth’s life is having a caring adult, whether it’s a parent or guardian, or it could be an adult in the community with a youth agency�whatever.”

Grace is now putting the finishing touches on a national handbook of educational and community resources for sexuality and gender, outlining resources in every province and territory. He says he couldn’t have done any of it without crucial support from the U of A.

“I don’t know of many other universities where I could do this work to the degree I do it at the U of A. That the climate at the U of A is so inclusive makes my life a whole lot easier.”

“Dr. Grace’s pioneering research, and his belief in the importance of turning research into community-based action, lives out the University of Alberta’s Dare to Discover and Dare to Deliver vision of connecting the university with the communities it serves,” says Murray Billett, education officer for the United Nurses of Alberta.