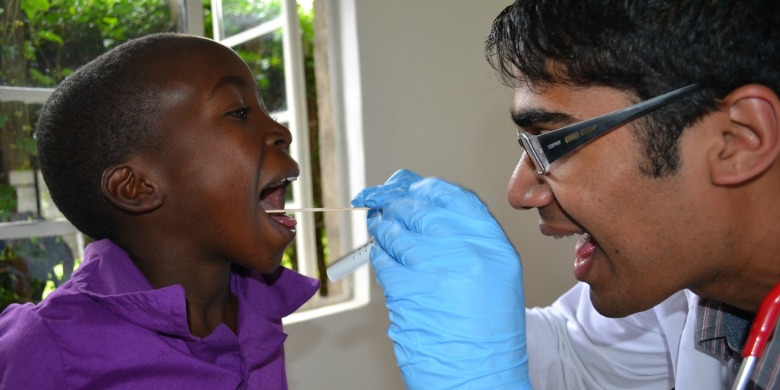 (Edmonton) Three University of Alberta medical students recently returned from an elective in Kenya where they worked with patients who had anthrax, leukemia, tuberculosis and chronic conditions like arthritis.

Kent Comeau, Roshan Abraham and Ryan Knebel, all third-year students in the Faculty of Medicine & Dentistry, said their four-week experience in Africa through A Better World Canada and their faculty’s Office of Global Health will make them better doctors.

“Everyone was very conscious of their own mortality,” says Abraham. “Even benign things were still very concerning to people, because for them, their livelihoods depended on it. It reminded me that part of our role as physicians is to provide comfort—to let them know, ‘Everything will be OK,’ or ‘Here are some steps you can take to improve your health.’ It is something I will definitely take with me in my career.”

The trio travelled with Comeau’s father, Ray, a family physician in Sylvan Lake; Comeau’s mother, Deryl, a nurse; and another physician-nurse couple and their son, who is an engineer. The organization A Better World Canada provides patients with access to free medical care and free antibiotics, builds schools and orphanages, and provides clean water and sanitation in villages. This was the first year the organization included medical students, as a way to expand the students’ education.

The group spent the first half of its trip in numerous villages about five hours outside of Nairobi. The drive to each village was between three and four hours. The clinics were usually set up in schools, and the group would see about 60 patients a day.

Though many of the patients’ ailments were similar to what the students would see in Canada, the lack of resources in Kenya provided some challenges.

“We were limited with diagnostic testing and hardly any of the patients had medical records or charts, so we started from scratch with lots of these patients,” said Comeau. “We were their first point of contact, so we had to get their history, do a physical and pool together all the information to formulate a plan to present to our preceptors.”

Patients had no qualms waiting for hours in line to see the Canadian contingent. Lineups snaked around clinics and down the street, or backed up onto nearby hills.

“They thought we could cure everything—the doctors and, to an extent, us,” said Abraham. “There were very, very high expectations. It was tough to grapple with that at first, but then you learned to leave that behind, and focus on your job and get it done.

“It was also challenging to know that after we treated them there would be no continuity of care whatsoever. Even in clinics that had medical officers monitoring patients on a regular basis, we weren’t sure how much information they would take from our assessments.”

The medical students spent the last two weeks of the trip at a small, 40-bed hospital in Mombasa, which gave them a chance to shadow numerous procedures and situations as they rotated through maternity, surgery and outpatient wards. The students said they witnessed many births, considering it is common for a Kenyan woman to have four or five children throughout her lifetime. Many childbirth cases were complicated by maternal HIV infections.

Abraham said much of the medical instruction in Kenya is practical, hands-on learning. One of the doctors they met did 150 caesarean sections a year as part of her training.

“That’s the way they learn. It was great to see. It’s not what we see in our rotations—it’s a lot more informal—but it worked.”

Knebel said one of his most interesting cases was a man who came in complaining of joint pain. After taking a patient history, Knebel correctly determined that the patient had gonorrhea—and that the patient’s three wives had the condition as well. Because the whole family was at the hospital at the same time, Knebel was able to treat the man and his wives. Another interesting case was seeing skin tuberculosis, which presented itself as a growing lesion on the patient’s chest. He also saw a couple cases of pulmonary TB—something not commonly seen in Canada.

Looking forward, Abraham says he will actively work on sharing the news about his experience with second-year medical students, in hopes of encouraging them to take the medical elective next year.

“This trip has definitely planted the seed for me to do more work in developing countries,” he says. “It’s something I will never forget.”

Watch a video about a recent medical trip to Kenya through A Better World Canada.

U of A medical students enhance learning with elective in Kenya

Get the flash player here: http://www.adobe.com/flashplayer