After losing her own voice, theatre grad helps others find vocal power

Elissa Weinzimmer came to UAlberta looking for a career as a voice teacher; she found two lifelong mentors. 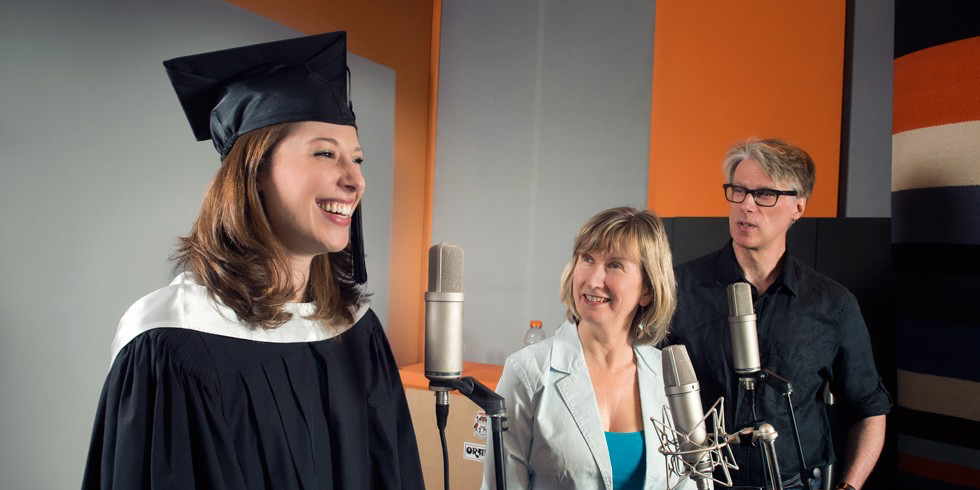 Elissa Weinzimmer in the studio with her professors and mentors, Betty Moulton and David Ley. (Photo: Richard Siemens)

(Edmonton) Elissa Weinzimmer knew she was pushing her voice too far. In the final year of her bachelor’s degree in theatre and English at the University of Southern California at Los Angeles, she was enjoying her considerable gifts as a singer.

Problem was, having always been a “good girl” growing up, she also decided to party in her final semester, which included soaking her vocal cords in alcohol and singing out loud with impunity. Her wild phase lasted only a month or so, she says, but it was enough. She woke up one morning to find her voice was gone.

“It stopped me in my tracks,” says Weinzimmer. “I remember it was Super Bowl Sunday, and when I woke up it felt like there were shards of glass in my throat, like really bad strep throat. Halfway through the Super Bowl, I got up, spat into the sink and something red came up. It was absolutely terrifying.”

She had grown up thinking, as so many young singers do, that her voice was invincible. Always considered the best singer in high school, she would frequently skip vocal warm-up. “But now I know, you can’t take it for granted.”

Weinzimmer was put on vocal rest for a month—a challenge because she was expected to play a role in a local production of Angels in America. Gradually she was able to muster enough vocal power to finish the run, but she admits her voice has never been the same.

However, there was a silver lining in all that pain and distress: “I was so perplexed by what had happened that I wanted answers.” Weinzimmer became passionately interested in how the voice works—or fails to work. She trained with an instructor schooled in the Fitzmaurice voice technique, earned her coaching credentials and decided she wanted to pursue graduate work.

That’s what led her to the University of Alberta and its renowned MFA program in theatre voice pedagogy, along with its principal instructors, Betty Moulton and David Ley.

“Living in L.A., I didn’t even know where Edmonton was, to be quite honest. But it was a no-brainer to come here,” she says, especially because there are only two students in the U of A program with considerable one-on-one mentoring.

“We have a free pass to watch Betty and David teach anytime we want—both fantastic teachers even though they have such different approaches. And they’re both very open-minded in talking about why they do something a certain way. They make themselves available for conversation…. This is a lifelong mentorship situation, not just two years.”

“Elissa has brought an energy and a drive to the work, and kept my idea moving out into the world in a way I might not have,” says Ley.

“This could be my career,” says the winner of the 2014 VASTA Clyde Vinson Memorial Scholarship, adding that she plans to take Ley’s discovery to New York and help not only those who use their voice professionally, but also anyone with a need or desire to improve vocal ability.

And as a yoga instructor to boot, she’s managed to carve out a niche of her own, exploring the integral connection between the voice and the body.

“Really what I’m teaching is embodied voice,” she says. “If you take my voice class, you’re doing yoga. Impulse comes from the body, not the brain.

“As Betty keeps saying, let it come from the guts of you.”

After losing her own voice, theatre grad helps others find vocal power
Newsroom