After Robert Mugabe: beware the ‘Crocodile’ of Zimbabwe

The country’s citizens are jubilant after the dictator’s resignation, but his successor may be no improvement, says UAlberta historian. 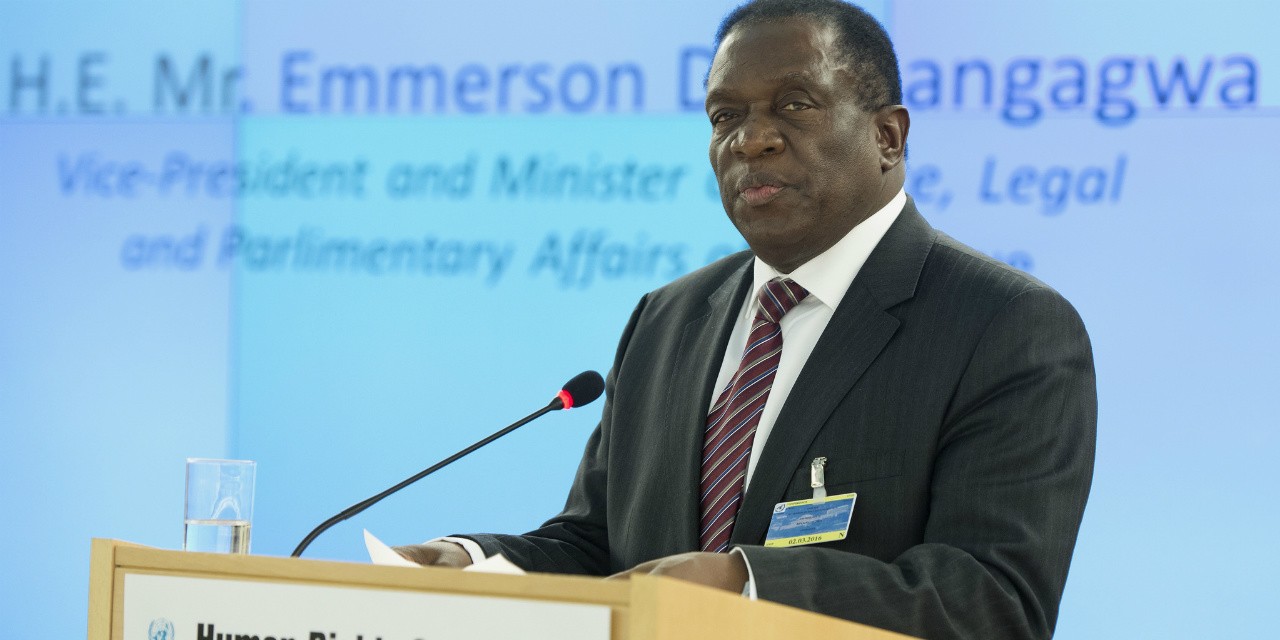 Emmerson Mnangagwa's impending reign as Zimbabwe's next president may not bring the relief the country's beleaguered citizens were hoping for in the wake of Robert Mugabe's resignation. (Photo: Jean-Marc Ferré, UN)

It was the biggest street party Zimbabwe has seen in decades. Thousands sang and danced the night away, bidding good riddance to Robert Mugabe’s 37-year, iron-fisted rule over their country after he announced his resignation Tuesday.

But in the clear light of day, Wednesday’s hangover might be slightly more searing with the realization of what comes next—the reign of former vice-president Emmerson Mnangagwa, also known as the “Crocodile.”

The former security chief, ousted by Mugabe only two weeks ago, is now expected to be sworn in as president Friday after last week’s military coup.

“He's a nasty, nasty powerful person,” said University of Alberta historian Guy Thompson, who specializes in the history of Zimbabwe. As far back as the early 1980s, while citizens were similarly jubilant in the wake of Mugabe’s revolution, Mnangagwa was busy crushing dissidents by the thousands, said Thompson.

"Mnangagwa was responsible for the death of probably 25,000 people, primarily among the Ndebele minority, as minister of state security then.” As Zimbabwe’s new leader, he may very well arrest those who oppose him, “and worst-case scenario, kill them,” he said.

Thompson has spent much of his life studying Zimbabwe, ever since reading about racial segregation in what was then called Rhodesia as a 13-year-old boy. From a continent far away, he watched as white-minority rule there began to crumble.

“In the late '70s, I read that there were black buses. I couldn't believe that. For a Canadian middle-class kid in the ‘70s, I thought, 'What do you mean there are black buses, or sections for black people?' This was astonishing.”

Thompson remained captivated by a country that had been through the ravages of colonization but for a while seemed to emerge unscathed.

"There was stuff going on that was really repressive, but it was only in the ‘90s that people started to recognize it," he said.

Thompson spent six years living in Zimbabwe as a high school teacher and researcher in the 1990s. What struck him most was that, despite a high degree of frustration among the people with their ruler’s autocratic ways, there was still a pervasive faith in his ruling ZANU-PF party and its revolutionary ideals.

That may be why the people are willing to give Mnangagwa a chance, said Thompson, even though there is little hope his rule will lead to anything like democracy.

“But the very fact (the military is) removing someone, that it is saying they don't respect Mugabe and don’t respect his rule,” might be an incremental kind of progress, said Thompson.

It’s also important to remember that Mnangagwa at least has the right credentials, he added.

“One thing that's become really clear is you need to have experience with the liberation movement in the 1970s.”

Mnangagwa has that experience in spades, standing by Mugabe’s side during Zimbabwe’s struggle for independence. And in the eyes of much of the population and the military, anything is better than Mugabe’s wife Grace, who many feared would succeed him.

“But Grace would never begin to qualify,” said Thompson.

For some Zimbabweans, there is also the slim hope that Mnangagwa may at least be slightly more adept at turning around Zimbabwe’s devastated economy, bringing in legitimate legal reforms that are favourable to big business, gradually choking off a dominant black market and inspiring confidence in investors.

South Africa and China especially, who have by far the biggest stake in Zimbabwe, “would both like to see a more ordered and stable economic situation,” said Thompson.

In the end, he added, as odious and ruthless as the Crocodile may prove to be, he might at least bring stability. For many, and for now, that just might be enough.

After Robert Mugabe: beware the ‘Crocodile’ of Zimbabwe