AFTER THE FIRE || Sifting through the legacy of toxic ash

Fallout from the Fort McMurray fire could become more harmful to residents over time. 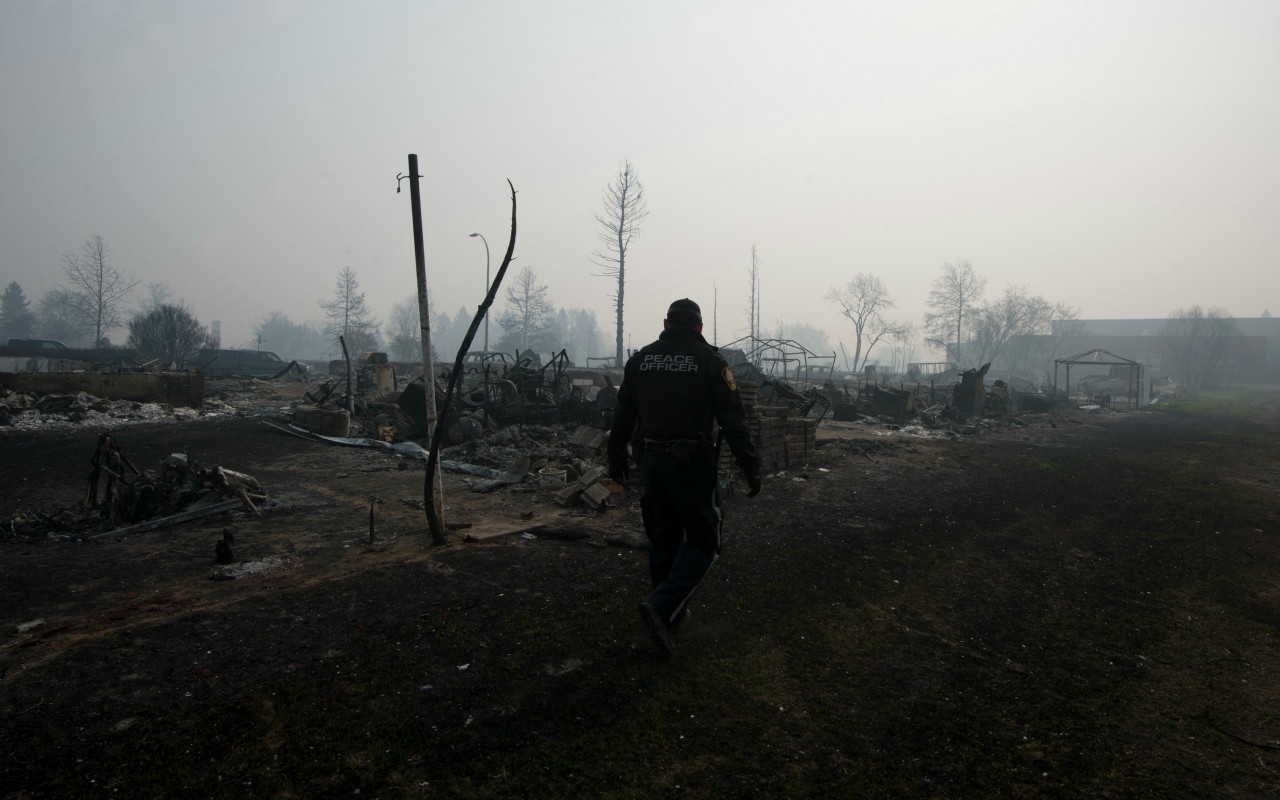 A Wood Buffalo peace officer walks through thick smoke in in the Beacon Hills neighbourhood in Fort McMurray on Saturday, May 14, 2016. AHS has issued an air-quality advisory for the Fort McMurray area.Travel into the city is still restricted to emergency response and essential services only. (photograph by Chris Schwarz/Government of Alberta)

When the ash settled after the California fires of 2007 and 2008, the U.S. Geological Survey found that, when mixed with water, the ash was almost as caustic as oven cleaner.

And after the Slave Lake fires of 2011, ash tests found lead at three times the recommended levels for residential soils. Dioxins and furans—some of which are potent carcinogens—were anywhere from 13 to 52 times higher than recommended levels.

These are sobering precedents as scientists and public health officials try to assess the long-term toxicity of ash left in the wake of the Fort McMurray fire of 2016. As with any urban fire, it’s not just trees that go up in smoke. Fires also rip through homes and buildings, burning hydrocarbons in such materials as vinyl siding, nylon carpets, household chemicals and tires.

U of A chemist Sarah Styler is trying to determine not just what was in that ash when it dropped on and around Fort McMurray, but also how those toxins change over time, sometimes producing chemicals more harmful to humans and animals than those found in the primary ash.

"The composition of toxic materials from an urban fire gets much more complicated, so there are a lot of unanswered questions," said Styler. “Ash may react in the environment to become more toxic, but the transformation chemistry is poorly understood.”

The research is aimed at answering three key questions Fort McMurray now faces as it recovers from the fire: What is the degree and mode of toxicity of the ash, how long before levels of this legacy ash in affected areas are naturally reduced to safe levels, and how effective was the post-fire cleanup in reducing ash exposure?

Styler and her colleagues at the U of A will examine a toxic group of compounds known as polycyclic aromatic hydrocarbons (PAH), shown by Alberta Health to be elevated in Fort McMurray ash samples, along with polychlorinated biphenyls (PCB), dioxins and furans, all known to be carcinogenic.

Her team will expose PAH samples—collected just after the fire—to light and ozone to determine what chemical reactions occur in specific environments, such as water, soil or urban surfaces. And because the products of these reactions have been shown in some cases to be more toxic than the parent compounds, they will also explore whether ozone and light exposure increase ash toxicity.

Samples for the study were collected both outdoors at various sites and inside Fort McMurray homes and buildings.

"If ventilation systems were running during the fire, then there could be places in homes where there is ash or house dust that have elevations of these compounds,” said Styler. “(In addition to inhalation) it can be taken into the body if kids are, for example, touching it and then licking their hands."

The research is part of a larger project funded by the Canadian Institutes of Health Research and led by University of Toronto chemical engineer Arthur Chan, who will also study pulmonary responses to inhalation of the ash to determine whether the fire left behind enough toxic ash to contribute to higher risks of lung diseases.

“Knowing the degree of inflammatory response triggered by ash particles from Fort McMurray fires will be crucial to predicting the impacts of the fires on pulmonary health. But to date, no study has evaluated whether or not these particles can cause oxidative stress in lungs,” said Chan.

Styler said the results of her study will be likely be ready for publication before the end of the year.

AFTER THE FIRE || Sifting through the legacy of toxic ash
Newsroom