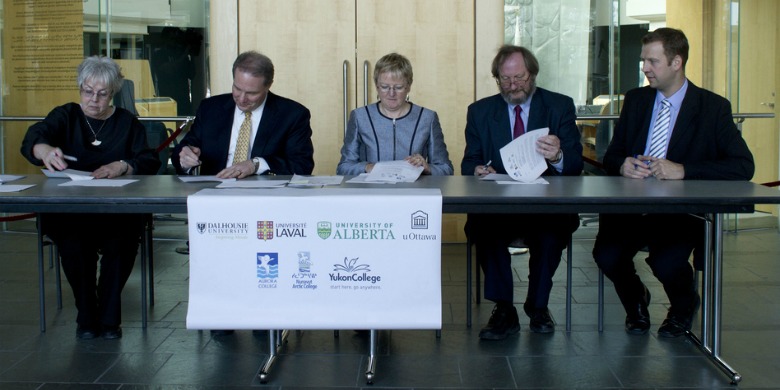 120426-caldoagreement-banner
(second from left) Carl Amrhein, U of A provost and vice-president (academic), signs an agreement that will enrich opportunities among Canada's leading research universities and three northern colleges. Photo: James MacKenzie

Carl Amrhein, the U of A’s provost and vice-president (academic), took part in a ceremonial signing on behalf of CALDO, a consortium of four of the country’s top research universities: the U of A, University of Laval, Dalhousie University and University of Ottawa.

The five-year agreement, signed in the Great Hall of the Northwest Territories Legislative Assembly, signifies the beginning of CALDO’s partnership with Aurora College, Nunavut Arctic College and Yukon College, which serve students throughout the North.

The collaboration among all of the schools will benefit everyone involved, by allowing for an exchange of ideas, talents and discoveries among faculty and students, and by increasing student mobility, according to Amrhein.

“This agreement paves the way for greatly expanded research partnerships among the northern colleges and the more than 200 research centres and institutes within the CALDO consortium,” said Amrhein.

Potential now exists for the universities to foster new collaborations with the Yukon Research Centre, Aurora Research Institute and Nunavut Arctic Institute, with a focus on northern projects.

The agreement also increases access for northern students who want to transfer their studies to degree programs at CALDO’s member universities, and eases their transition to larger campuses. It also provides opportunity for students from member universities to head north, Amrhein noted.

The partnership also reaffirms the U of A’s position as the leading university in northern research and studies in Canada, through such initiatives as the Canadian Circumpolar Institute.

“We are excited to embark on this partnership because it offers many more opportunities for all of our students in expanded degree and exchange programs.”

The new partnership builds on CALDO’s existing mandate of enhancing access for students from around the globe.

“This is a good fit for Yukon College and will provide real benefits to our students,” said Karen Barnes, president of the college. “The CALDO consortium universities do a great deal to ease the transition for international students coming to Canada. This expertise can now also help students from our remote northern communities who also encounter challenges when moving south to continue their education.”

Barnes is pleased that the U of A and its fellow universities now have the chance to gain reciprocal knowledge of Canada’s North.

“This will be a great opportunity for students, professors and researchers at the CALDO universities to learn more about the North, to know what we are working on and learn about the unique aspects of each territory.”

The institutions will continue to work together to identify specific goals, Amrhein said.