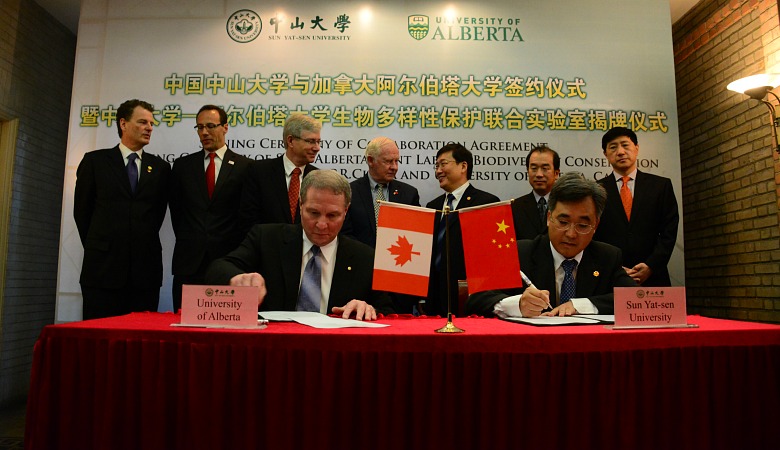 Attended by Governor General of Canada David Johnston, a signing ceremony held at Sun Yat-sen University in Guangzhou, China, formalized three agreements between the two institutions that pave the way for broader co-operation and build on existing partnerships such as the SYSU-Alberta Joint Lab for Biodiversity Conservation.

The memorandums of understanding include an institution-wide agreement to foster academic exchanges and co-operation among faculty and students, a university-wide student exchange agreement, and a funding agreement to attract top Chinese PhD students to the U of A through the China Scholarship Council program.

Founded in 1924 by its namesake, Sun Yat-sen University is a vibrant, multidisciplinary institution and a valued U of A partner, said Carl Amrhein, provost and vice-president academic, who signed the agreements on the U of A’s behalf.

“These agreements celebrate a commitment for co-operation and sharing of knowledge between the University of Alberta and Sun Yat-sen University, which ultimately benefits Albertans and Canadians through the synergies created by academic exchanges and collaborative research,” Amrhein said. “Innovation is the result.”

A prime example of such success is the joint biodiversity lab established at Sun Yat-sen University through a 2011 agreement with the U of A. In recognition of the SYSU-Alberta lab’s work, a nameplate for the facility was unveiled Oct. 24 by the governor general, Sun Yat-sen University president Ningsheng Xu and Amrhein.

Established through the efforts of U of A Faculty of Agricultural, Life and Environmental Sciences professor John Spence and led by ALES professor and Canada Research Chair Fangliang He, the lab has drawn collaborative researchers from around the globe including the United States, Australia and Europe, as well as Canada and China. Graduate students and post-doctoral fellows from both countries also benefit from working together in the lab, building a legacy of international co-operation for vital future research, He said.

“The loss of biodiversity is a global issue and we need multinational collaboration to tackle it. Scientific research and academic exchanges have no boundaries.”

Cutting-edge research produced by the lab teams on species extinction and the importance of ecology and biodiversity conservation has appeared in high-impact publications such as Science, Nature and The Economist. As well, the differing climates offered by Alberta and southern China have allowed for hypothesis testing that could one day help address Alberta’s ecological challenges, He noted.

The trio of agreements and the continuing work of the lab all strengthen the U of A’s profile in the populous Guangdong Province where Sun Yat-sen University is based, and create new relationships with southern China, said Cen Huang, executive director of international relations and recruitment for University of Alberta International.

“There is tremendous potential to attract talented undergraduate and graduate students and researchers to the University of Alberta from southern China,” said Huang. “Our partnership with Sun Yat-sen University is already successful and will continue to flourish.”