Aiming for a medal in Rio 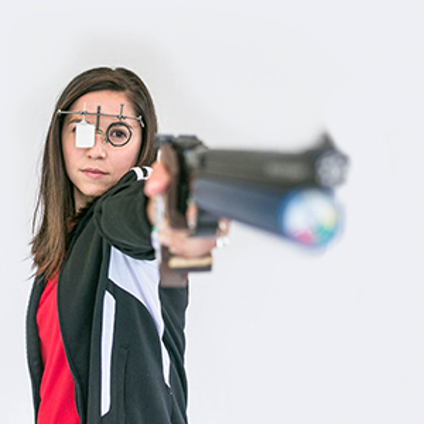 A civil engineer by trade, Kiejko sees parallels between her sport and her career. Photo credit: Heather Rattai Photography

Sport shooter is third in family to compete in the Olympics. 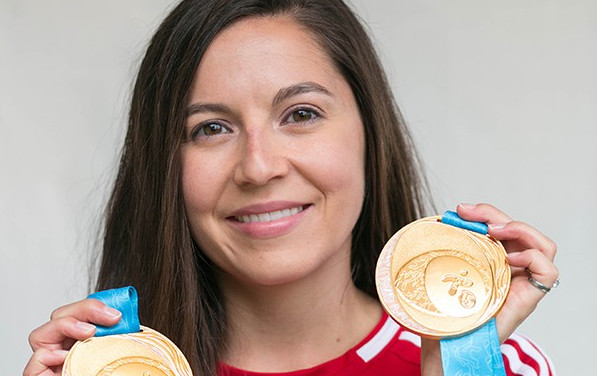 Alumna Lynda Kiejko won gold medals in two pistol shooting events at the Pan Am Games, allowing her to follow in her sister's and father's footsteps and compete in the Olympics. Photo credit: Heather Rattai Photography

As a person who grew up with asthma and allergies, Lynda Kiejko, ’03 BSc(CivEng), is the first to admit she isn’t your typical Olympic athlete. She has always loved the outdoors but as a kid, running and playing outside made her wheeze.

So it may seem ironic that she’ll be vying for a place on the podium at the Rio 2016 Olympic Games — and as a top-ranked competitor in her sport, no less. (Golden Bear alumnus Ben Saxton is also heading to the Games.)

Kiejko will compete in the women’s 10-metre air pistol and 25-metre pistol events in August. Since winning the national title in the 10-metre in 2014 (just 15 days after giving birth to her daughter), she has steadily climbed the ranks to become one of the world’s best sport shooters. Last July, she won gold in women’s 10-metre and 25-metre pistol shooting events at the Pan Am Games, securing a spot on Canada’s 2016 Olympic team.

Shooting is a family affair for Kiejko. (And so are the Olympics, it seems.) Her father, three-time shooting Olympian Bill Hare, built a shooting range in their basement for Kiejko and her sister, Dorothy Ludwig, ’00 BA, when they were pre-teens. He coached his daughters as well as the entire Canadian national team until he passed away in 2005. Ludwig has also made it to the Olympic level, competing in 10-metre air pistol at the London 2012 Olympics.

A civil engineer by trade, Kiejko sees parallels between her sport and her career. They both require diligence, focus, testing assumptions and constantly taking theories back to the proverbial drawing board. In both, precision is key.

But nothing, she says, can compare to the exhilaration of hearing the big bang of a .22-calibre pistol or the deep sense of respect for the power of a firearm.

“When you have that perfect shot, it’s like time slows down. Having those moments of perfection is what will take me back to the range time and time again.”

We asked Kiejko to give us a marksman’s-eye view of her events in Rio.

How many shooting events are there?

There are 15 events — nine for men and six for women. Kiejko is competing in two of them: 10-metre air pistol and 25-metre pistol.

What’s the aim of the game? (pun intended)

From three positions — standing, kneeling or prone — athletes shoot at stationary or moving targets with a variety of firearms. Points are scored for accuracy. The target is divided into 10 rings, with the centre being worth the most points and the other rings decreasing in value.

As the Olympic website describes it: “shooting is a true test of accuracy and demands intellectual and psychological skill rather than physical strength, with competitions won and lost by a matter of millimetres.”

How does the 10-metre air pistol event work?

Athletes take 40 shots in 50 minutes at a distance of 10 metres from the target. The perfect shot is worth 10 points.

The top eight competitors from the qualification round go into the finals, which are pretty exciting, Kiejko says. After every second shot, the person with the lowest score is eliminated. Ties are broken by shoot-offs — making for a tense finale, where a millimetre could make the difference between a gold and silver medal.

And in the 25-metre pistol event?

The women’s pistol qualification round is in two parts, each with six series of five shots, or 30 shots total. The first half is a precision round: competitors have five minutes to shoot five shots. The second half is a rapid-fire round: competitors load five rounds in their pistols and have a three-second window to take each shot. (A three-second green light alternates with a seven-second red light. Athletes must hover their arms at 45 degrees during the red light and wait for the green to shoot.) In the finals, the top eight athletes shoot four series of five shots and are scored on an hit-and-miss basis.

Mobility, balance and core strength are all important aspects of the sport, so Kiejko follows a rigorous physical training program. But most of her physical training is on the shooting range with an electronic shooting trainer. Shooting at electronic targets allows the “trainer” to trace Kiejko’s actions so she can see in tiny detail the movements she makes as she takes a shot: from the steadiness of her hand to how she aimed to how smoothly she pulled the trigger

What makes a winner?

Shooting is a mental sport to a great extent, Kiejko says, so mental training is key to success. As part of her training regimen, she practises meditation and works with a sports psychologist to keep her mind (and hands) calm during competition. Because a millimetre can cost shooters a championship, it’s extremely important to learn how to quiet the mind — even during the intensity of Olympic competition.

Aiming for a medal in Rio