Shawna Pandya on track to become an astronaut. 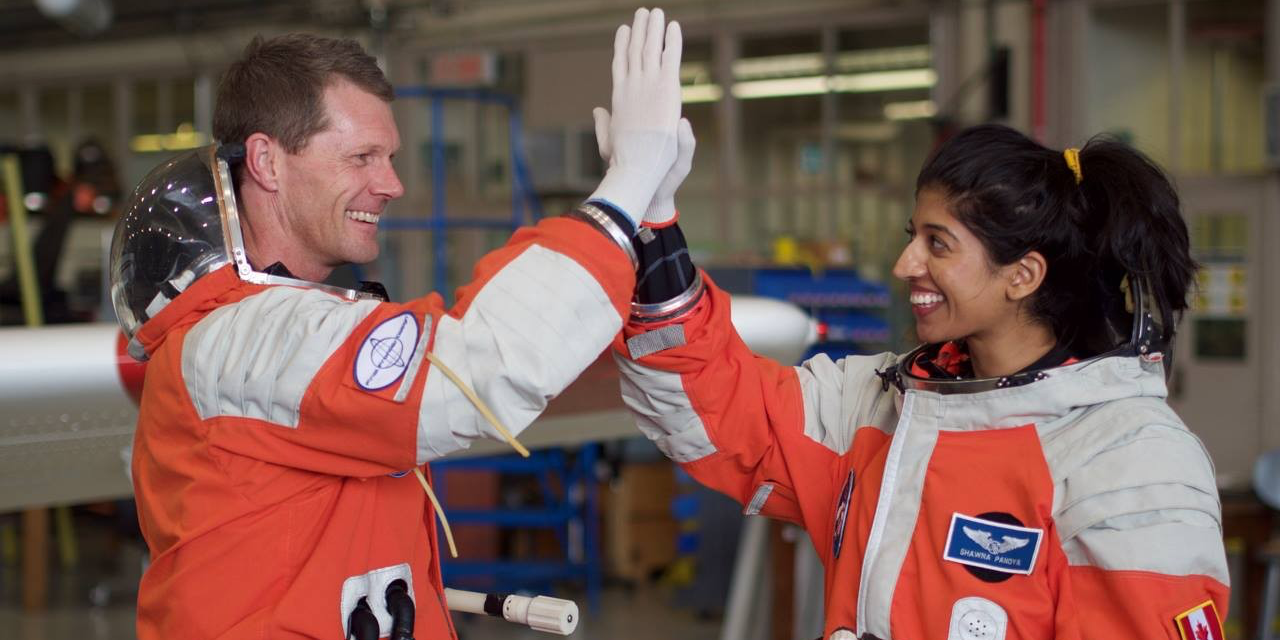 Shawna Pandya has always been a high achiever, going back to her days in elementary school. Through the years it’s taken her far, helping Pandya become a physician in 2012 at the age of 27. Today she is completing her family medicine residency in the Faculty of Medicine & Dentistry’s Department of Medicine, but soon, Pandya hopes her career trajectory will reach much, much higher.

In between on-call shifts at the hospital and caring for her patients, Pandya is heavily engaged in training opportunities to become an astronaut. In October she gained her most recent experience, having been selected as a scientist astronaut candidate to take part in four days of training with Project PoSSUM—the first manned suborbital research program devoted to observing Earth’s upper atmosphere.

As part of her training, Pandya participated in aerobatic jet flights to learn about changing gravity environments and simulated a suborbital flight to ensure she memorized mission parameters and knew how to operate the scientific equipment. Shortly after completing her training, she also took part in testing the first commercial spacesuit in zero gravity through the National Research Council in Ottawa.

“We did the test on parabolic flights,” says Pandya with a smile. “Basically it’s like an inverted U. You accelerate at two Gs and then at the parabola you are weightless for 20 seconds. At that time you do your manoeuvres, and if you have time, enjoy yourself before coming down. We got through 15 parabolas. It was incredibly fun.”

Pandya has always wanted to reach for the stars. As a teenager she recalls carrying a book on astronomy for the better part of a year and being enthralled with the pictures of planets, asteroids and stars. Eventually her interests grew to include medicine, putting her on a course to become a physician—a goal she achieved in 2012. But she never completely put aside her dream of also becoming an astronaut.

After completing her undergraduate degree, and before she began her studies to become a doctor, Pandya moved to France to earn her master's in space sciences from the International Space University. From there she received an opportunity for an internship at the European Astronaut Centre as part of the European Space Agency in Cologne, Germany. Later, as she began her medical career, Pandya did a research stint at NASA’s Johnson Space Center in Houston, Texas, working on medical scenarios for long-duration space flight missions to near-Earth asteroids.

For Pandya, space and medicine don’t compete for her attention, but complement each other naturally.

“When you think about the implications of sending humans up into space, it’s a totally foreign environment. It’s harsh; it’s cold; you need closed life-support systems; there’s a lot of radiation; and most importantly, there’s no gravity,” says Pandya. “There are also a lot of human factors—things that you wouldn’t necessarily consider. Like the psychology of keeping six people in a tin can hurtling thousands of kilometres an hour through space. How do you keep those people from not strangling each other over the course of a long-duration mission?

“There’s a lot of medicine involved with human space flight. So it’s actually more of a natural marriage than one might think.”

At the end of the day, Pandya says, she’s a doctor and is committed to being an excellent one. Medicine and her patients will come first. She is grateful, though, for a university program that is supportive of her dream and has been flexible in allowing her to pursue it.

And that pursuit will continue in the months and years to come. Pandya is already planning to undertake centrifuge training this winter in Philadelphia at the National Aerospace Training and Research Center along with advanced survival training later in 2016. She is also applying to be part of a project out of the University of Florida that in 2017 hopes to break the record for the longest human expedition under the sea—an experience not dissimilar to being in the close confines of a space shuttle.

Ultimately, Pandya hopes to be chosen as a scientist astronaut by Project POSSUM when research flights begin in 2017 or 2018. If the opportunity ever arises, she will also apply to become an astronaut with the Canadian Space Agency. It’s a dream as big as her ambitions—with no guarantee of success. But regardless of where her future takes her, Pandya has words of wisdom for others who, like her, dream of the stars above.

“Work very hard, try to be the very best and don’t ever be limited by anything. The sky isn’t even the limit. Beyond the sky is the limit."