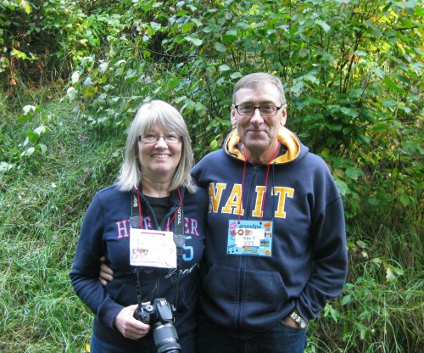 Connie and Ken Thiessen at the Alberta Aphasia Camp.

Alberta Aphasia Camp: A celebration of sharing and learning 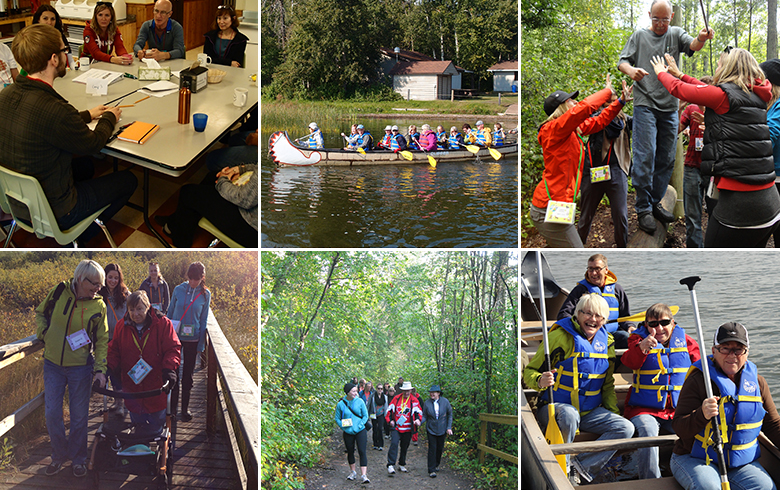 The inaugural Alberta Aphasia Camp was a chance for adults with aphasia and their caregivers to connect and enjoy a range of activities.

(Edmonton) Ken Thiessen had the gift of gab. He'd chat anybody up—and down and sideways, and sometimes all night long. To his grandkids, he was the world’s greatest storyteller, a larger-than-life hero.

And then came the stroke. Suddenly, Grandpa Ken couldn't tell those stories; the words had gone.

That stroke, two years ago this December, left Thiessen paralyzed on his right side, unable to do basic tasks. It took six months of training with a speech-language pathologist at the Glenrose Rehabilitation Hospital before he could string together a sentence. He's still weak on his right side, but gets around just fine. Story time, however, is just a memory.

“It takes me some time to get the words out,” says Thiessen, with some effort. He's one of 100,000 Canadians living with aphasia, a communication disorder often caused by stroke or brain injuries that makes it difficult to speak verbally or understand written words.

Until his stroke, Thiessen, 57, taught in the electrical apprenticeship program at NAIT, which he considered his dream job. Not only will he never teach again, his condition forever changed most of his relationships. His wife Connie—formerly the quiet one in the household—now serves as his voice when the words don’t come.

“It’s been a role reversal in many ways,” she says. “We’ve both been forced outside our comfort zones.”

Thiessen hardly visits with old friends, mostly because talking takes too long. He can see their attention drift; retreating inward is just easier.

“It just takes a lot of patience and time, which is tough when our society is so fast-paced,” says Connie. “Some people don’t give him the time of day.”

This September, the University of Alberta's Faculty of Rehabilitation Medicine launched a new outdoor camp for adults with aphasia and their care partners. The Alberta Aphasia Camp hosted 30 campers at YoWoChAs Outdoor Education Centre a​t Lake Wabamun, providing an opportunity for people like the Thiessens to connect with others who know all too well how isolating aphasia can be, and to learn and grow through new friendships.

“A lot of my clients mention they lose a huge component of their support network. It’s easier to not be with people,” explains Esther Kim, co-organizer of the camp and an assistant professor in the Department of Communication Sciences and Disorders.

Modelled after the groundbreaking Aphasia Camp Northwest run by Portland State University, the three-day camp featured a range of activities, from adapted yoga to rope courses to canoeing to participating in a drum circle.

March of Dimes Canada supports a similar camp in Ontario and was a partner in funding and organizing Alberta Aphasia Camp. “They were actually going to do an aphasia camp in Alberta when they found out we had this in the works,” Kim says. “Both Aphasia Camp Northwest and March of Dimes Canada were very giving with support and knowledge for planning. It’s been a very rewarding partnership.”

At the closing session, campers were asked to sort cards of activities they used to do, activities they currently do and activities they wish they could pursue. Then, they were challenged to take up some of those activities, such as getting a library card or planning a camping activity.

“One of our goals was to get people to participate more in the community, to be able to see that, yes, they have a communication disorder, but that doesn’t have to limit their participation in their life,” says Andrea Ruelling, co-organizer and a clinical educator in the Department of Communication Sciences and Disorders. “Not only does this challenge help to zero in on that, but a weekend full of these experiences also helps boost their confidence—that they can do this, or they can do something new.”

More than two dozen speech-language pathology students helped organize and facilitate the camp, either as volunteers or as part of a master’s project. With each camper capable of varying degrees of communication—in some cases just a few words—facilitating discussions sometimes required using communication books with picture symbols, maps or pieces of paper.

For second-year speech student Caitlin Bittman, the camp provided valuable experience working with people with aphasia and their families. But more important, she says, it was an opportunity to make friendships and hear many emotional stories as campers opened up to “basically perfect strangers”—and shared their common experiences.

“By Sunday, you really felt that sense of togetherness that wasn’t there on the first day. It was everything I’d hoped for, this sense of community. There were some amazing stories. It was an amazing experience.”

Work is already underway planning next year’s camp, and there’s also talk of a holiday reunion so the campers, students and organizers can share photos from the summer and reconnect.

For Thiessen—who earned the nickname “Daredevil” during the rope exercises—the camp wasn’t just a fun social outing; it provided a respite from the frustration of feeling pressured to communicate quickly. He also found the inspiration to challenge himself and take up one of his former joys, no matter how long it takes.

“I thought of my grandchildren. I want to interact with them and tell stories."

Alberta Aphasia Camp: A celebration of sharing and learning
Newsroom