Commitment unites Dianne and Irving Kipnes Foundation, University Hospital Foundation and the U of A to drive new research and improve care of people living with lymphatic disorders. 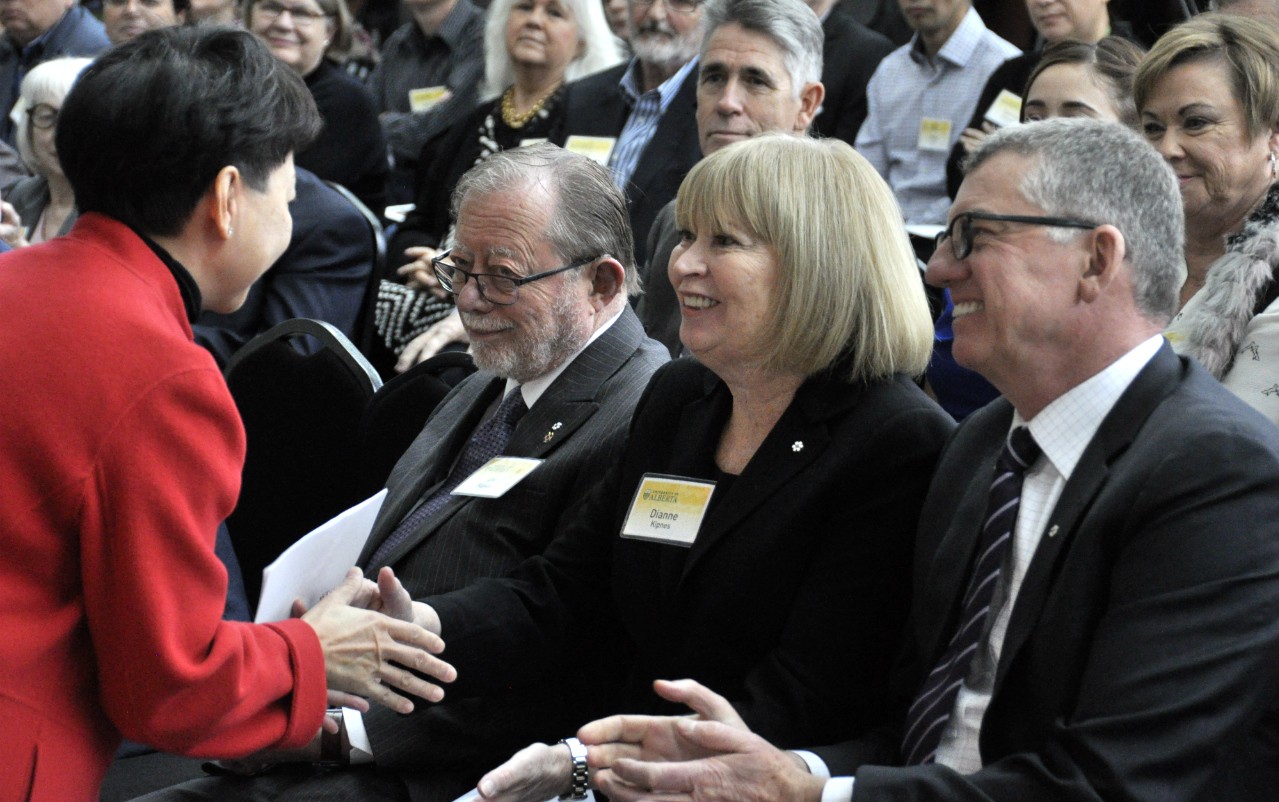 In 2009, Dianne Kipnes and her husband, Irving, were on a trip to Berlin, Germany, when she noticed pain in her legs while sightseeing. It wasn’t until she returned to her hotel room that she saw just how bad it was.

“I took off my jeans and my legs were three times their normal size and covered with large red scaly patches,” she said. “It was a shock.”

A trip to the emergency room ended with a diagnosis of an allergic reaction and a prescription for an antibiotic that had no effect. It was the first of several wrong diagnoses to come over the following month, each providing few answers and little relief.

It wasn’t until she returned to Edmonton that an appointment with a urologist ended with a correct diagnosis of cellulitis. A second consultation with her surgeon at the Cross Cancer Institute revealed that the cellulitis was related to lymphedema—a side-effect of her treatment for cervical cancer five years earlier.

“I just was lost and nobody seemed to have any answers. I was in the wilderness, so to speak. I can tell you it's very frustrating when you're looking for some diagnosis or knowledge and you can't find anybody that can help you. As a patient, you don't want to be the expert.”

Lymphedema is a little researched and not well understood chronic condition of localized fluid retention and tissue swelling caused by a compromised lymphatic system. Underreported, under-recognized and underdiagnosed, the disease can be genetically inherited or acquired as a consequence of surgery, trauma, cancer therapy, inflammation or infection of the lymphatic system.

While prevalence is difficult to estimate, according to the Alberta Lymphedema Network, approximately 300,000 people in Canada are affected by lymphedema. It has been estimated to affect nearly 60 per cent of cancer patients, and as many as 80 per cent of breast cancer patients who received a mastectomy. If left untreated, there is a risk of loss of limb function as well as the onset of chronic infections. Current treatments include manual drainage using a specialized form of massage and wrapping limbs. Some European centres are also experimenting with lymph node transfer, a form of auto-transplantation.

Her search for answers led Kipnes and her husband to become a driving force for better research and therapeutic treatments for people living with lymphedema in Alberta.

The endowed chair is the first of its kind in Canada.

“We’re at the ground floor of this because there really is no substantial collection of knowledge about lymphatic disorders right now,” said Irving Kipnes.

“These are not life-threatening disorders but they are life-altering,” said David Eisenstat, chair of the U of A’s Department of Oncology.

“Because most people live with this disorder and it doesn’t kill them, they’re just told, ‘You’re a survivor. You should be thankful and good luck to you.’ It’s an underdog disorder. It’s not been front of mind in the academic world or in the clinical world. So, to me, this chair is a wonderful opportunity to raise awareness and to say, ‘This is important, so let’s focus on research towards improvements in diagnosis and clinical care.’”

“The Kipneses have supported every major campaign that the University Hospital Foundation has had. Their philanthropy, their leadership, their generosity is legendary,” said UHF board chair Jim Brown, “but beyond their generosity and leadership, Dianne and Irv have also shown mentorship unlike any I have experienced.”

An international search for a suitable candidate begins immediately. It is expected the new endowed chair will work collaboratively with multi-disciplinary scientists across the province and beyond to drive research forward in helping affect fundamental changes in the care of patients suffering with medical problems in the lymphatic system, such as lymphedema.

In addition to the new endowed chair, the Dianne and Irving Kipnes Foundation has been actively involved in establishing Alberta as a centre of lymphatic research and treatment over the past decade. The couple helped establish the Salutaris Centre, an Edmonton-based clinic for lymphatic massage, donated millions for the Dianne and Irving Kipnes Lymphatic Imaging Suite at the University of Calgary and helped form the Alberta Lymphedema Network—a collaboration of scientists and clinicians devoted to generating knowledge to improve patient care in Alberta.

Though there is currently no cure for her condition, Dianne is hopeful for the future. For the time being, she receives a regular specialized lymphatic massage to drain fluids and help manage her lymphedema, which makes it difficult for her to walk. She is also considering a possible lymph node transplant procedure that is available in Europe, but has not yet made a decision. According to her husband, Dianne remains an optimist for both her future, and others like her.

“She fully believes there is a door there that could be opened to a much fuller understanding of how the disease comes about and how it can be treated,” said Irving.

“What do you want to be known for? What good have you done in the world?” added Dianne. “If we can do this, I think we can help a lot of people who are dealing with a lot of pain. How many times in anybody's life do you get to develop an area where so much research is needed?”