There are going to be winners and losers in climate change; it boils down to what we want to take care of.

Transplant to hotter and cooler regions triggers vital questions about a controversial tactic. 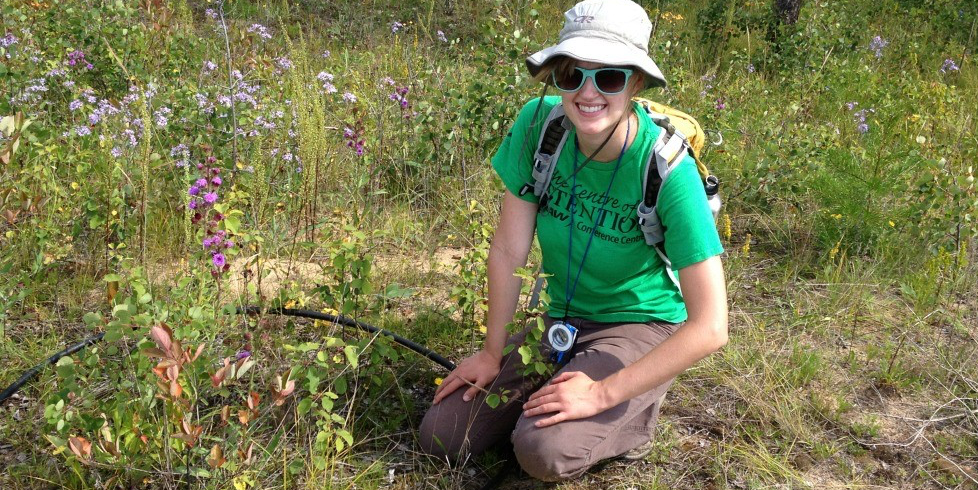 MSc student Jennine Pedersen transplants some northern blazing stars as part of a research project to see whether humans should intervene to help plants adapt to climate change.

A pretty wildflower that grows sparsely in east-central Alberta is helping researchers at the University of Alberta develop strategies for coping with climate change.

Transplanting the plant species to southern Alberta, where temperatures are as hot as those projected for its current habitat later this century, researchers found poor germination and establishment. But when the plants were moved north of their current range, they flourished.

“The particular species itself is not the important issue; we used it as a representative species,” said Scott Nielsen, a conservation biologist in the Department of Renewable Resources and an Alberta Biodiversity Conservation Chair.

“The more important thing is whether we are going to intervene and help species migrate when they lack the migration potential to keep up with climate change, by using the controversial conservation tool of assisted migration,” said Nielsen, the principal investigator on the project.

“And if we are, then we need to start examining how best to implement the actions.”

Nielsen notes that the questions to be tackled include which organisms should be moved, in what priority, whether it’s best to relocate plants or seeds, and how big the founder population should be. There are also policy issues to address with respect to moving organisms, because there is a long history of invasive species problems and policies to maintain seed zones.

The plant studied by Nielsen, forest ecologist Ellen Macdonald and master’s student Jennine Pedersen is the northern or meadow blazing star. It’s native to Alberta, but “locally rare,” growing only in a narrow section of the central parkland region from Edmonton to Lloydminster.

“This species has only 15 to 20 populations in the province and only one of those is large, about 88,000 plants near Bruderheim,” said Nielsen. “All the others are less than 500, with some at just 15 plants.”

They are also fragmented populations—islands surrounded by agricultural land unsuitable for the flower’s seed. This makes it nearly impossible for the plant to disperse beyond its original habitat and thus keep pace with climate change.

But those qualities also make the plant ideal for studying what impact climate change would have on it, and whether there are proactive tools that should be used to manage that impact.

Environments have always changed, said Nielsen, but the projected rates of climate change, together with habitat fragmentation, create new problems.

“How are species with low dispersal capability and within highly fragmented populations going to migrate to cooler climates quickly enough to resist extirpation?”

The answer is assisted migration, in which humans physically move organisms to more conducive climates.

In 2012, Nielsen relocated adult plants and seeds to three areas of Alberta: the Mattheis Research Ranch east of Calgary, a site north of Fort McMurray and another site within the plant’s current range. Pedersen translocated additional plants in 2013 to more sites.

The researchers found that adult plants did OK in all environments, but seed establishment in the south was terrible.

“[It suggests] that this species will face unfavourable conditions in its current range, leading to issues with long-term viability,” said Pedersen.

In the region within its current range, Pedersen found that seeds had a five per cent establishment rate, whereas in the north it was four times higher.

“I think there are two key messages here,” said Nielsen. “Suitable habitat is already available to the north that would allow us to do something about it,” and “there are going to be winners and losers in climate change; it boils down to what we want to take care of.

“In some cases, assisted migration will be a tool we will need to use if we want to preserve our biodiversity.”

The research was funded by the Alberta Biodiversity Monitoring Institute, through a grant from the Climate Change and Emissions Management Corporation, a not-for-profit organization helping Alberta adapt to climate change.