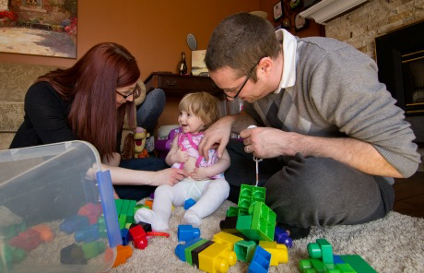 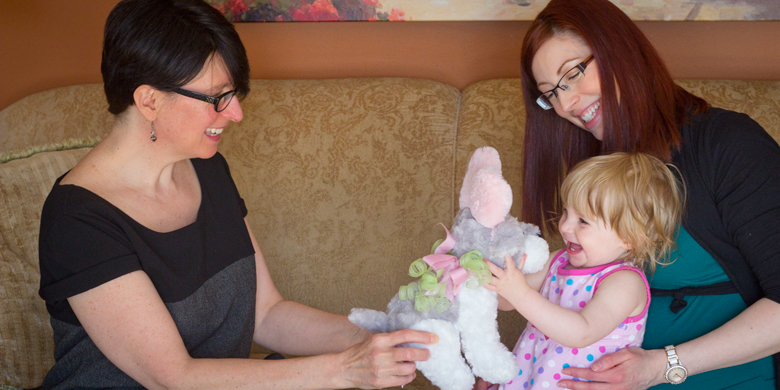 (Edmonton) After struggling with anxiety and depression since her teens, Lana Berry hit bottom at age 26. Divorced, unemployed and back living with her parents, she found herself in a dark place—“as sick as I’d ever been.”

Berry persevered, pouring her energy into getting better. She found work, met the love of her life, remarried and, six years after her low point, found out she was going to be a mom. Given her past, she was understandably anxious about what to expect.

“I did have worries, but I didn’t have regular conversations with doctors about depression. They would only ask me casually about how I was doing,” said Berry, now 34.

Despite her concerns, Berry was never formally screened for depression during or after pregnancy. That’s because Alberta, like all other provinces in Canada, does not offer universal prenatal mental health screening, and postpartum screening is inconsistent. It’s a situation that mothers like Berry—now pregnant with her second child—hope to change.

New research from the University of Alberta shows that a large majority, 63 per cent of 1,200 Albertans surveyed, favour mental health screening during pregnancy. Some 72.7 per cent support postpartum screening—a number that jumps to 88.5 per cent among women of child-bearing age.

Lead researcher Dawn Kingston, an assistant professor in the Faculty of Nursing, says existing research shows up to a quarter of women experience mental health problems during and after pregnancy. Screening would involve having a family doctor, midwife or obstetrician ask a set of standardized questions about a woman’s mental health status, during and after pregnancy.

“Screening is not just about asking a set of questions; it’s always about the discussion and movement into care,” said Kingston, an expert in maternal and child health. “Screening itself is not treatment; it is a way of getting women help.”

Kingston says universal screening is already being used in Australia, which has run a high-profile public awareness campaign about mental health issues, including perinatal depression. Perinatal screening is one of the top goals of Alberta’s new mental health strategy, and Kingston was approached by the Alberta Centre for Child, Family & Community Research about gathering data through the U of A’s Population Research Laboratory.

The randomized poll of Albertans—split equally among men and women—was conducted in 2012 and showed more than half of respondents knew a woman who had experienced postpartum anxiety or depression. When it comes to seeking help, respondents identified family doctors (38.9 per cent) and partners (17.7 per cent) as their preferred contact for support; less than five per cent said they would turn to an obstetrician, midwife, public health nurse, mental health expert or spiritual leader.

Preferred treatments included talking to a family doctor or midwife (81.6 per cent) and seeking counselling (79.8 per cent). Less than half of respondents endorsed medications or web-based self-help options.

“The problem with mental health and pregnancy is women cannot identify if their symptoms are unique or related to pregnancy or postpartum. They cannot do it.”
–Dawn Kingston

Perinatal screening has been the subject of debate in Canada, particularly since the Canadian Task Force on Preventive Health Care recommended routine screening for depression in primary care. That was overturned a year ago, citing a lack of evidence of effectiveness or harm. Some experts contend women will identify symptoms and seek help on their own, something Kingston says is unrealistic.

“The problem with mental health and pregnancy is women cannot identify if their symptoms are unique or related to pregnancy or postpartum. They cannot do it,” she said.

In her own experience, Berry says, many women are reluctant to speak about depression and anxiety, and she is all in favour of screening to help remove the stigma and protect families. Despite feeling better, she still feels anxious about her expanding family and the responsibility of suddenly raising two young children.

“It’s important to at least try and open that door and start the conversation. A lot of women don’t think about talking to their doctors until their symptoms are pretty severe,” she said.

Kingston’s study was published in BMC Pregnancy & Childbirth. The work was funded by the Alberta Centre for Child, Family & Community Research.