Alberta’s boreal forest could be dramatically altered by 2100 due to climate change, study shows

Model by UAlberta biologists predicts big changes because of climate change and wildfire. 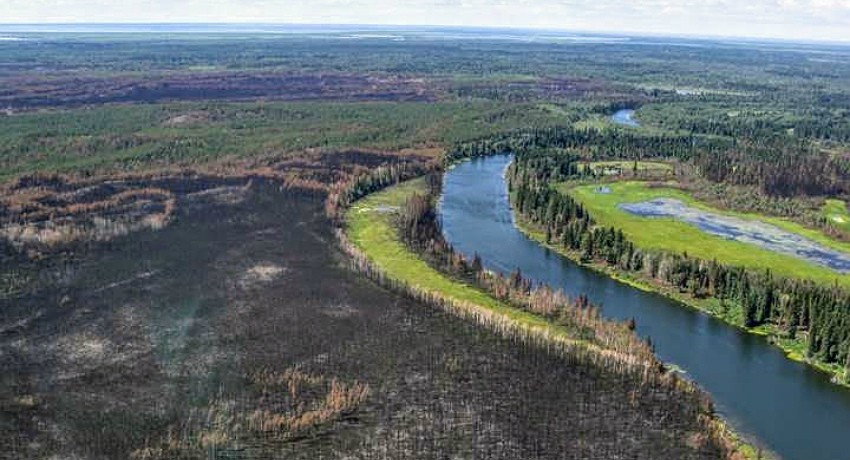 This forest stand near Jackfish River in Wood Buffalo National Park was decimated after a wildfire. A new UAlberta study predicts that about half of Alberta’s upland boreal forest will disappear as a result of climate change and increasing wildfires over the next century. (Photo: Natural Resources Canada)

Half of Alberta’s upland boreal forest is likely to disappear over the next century due to climate change, a new study shows.

“By 2100, at least 50 per cent of the boreal upland mixed-wood forest could become young deciduous forest and grassland, based on a combination of changes in climate and wildfire,” said Diana Stralberg, a recently graduated PhD student in the Department of Biological Sciences, who led the study conducted with other U of A biologists in collaboration with colleagues from Natural Resources Canada.

In the study, the researchers examined vegetation change related to wildfire disturbance and climate change over 100 years.

Stralberg simulated wildfire using a model from Natural Resources Canada and used data from the Alberta Biodiversity Monitoring Institute to determine what vegetation might grow back under future climates.

Repeating this cycle over a 100-year period painted a bleak picture: about half of Alberta’s upland boreal forest would eventually be replaced by young deciduous forest and grasslands. Boreal wetlands were not included due to uncertainty regarding their long-term persistence.

The results may actually be on the conservative side, because they do not take into account human activity, drought or insects, explained Stralberg, who began the study as a PhD student under the supervision of biology professor Erin Bayne.

“Our model assumes ‘business as usual’ in the province, with high carbon emissions and climate change continuing at the current rate. So societal action can still reduce this risk,” said Stralberg.

“Although fire is a natural component of this ecosystem, the irreversible loss of old forest could have detrimental effects on many species, including many resident and migratory songbirds. The dry climate of the western boreal region makes it particularly vulnerable to climate change.”

As ecosystems are disturbed by wildfire, climate change affects which vegetation types will grow back. Climate change also affects the potential for wildfires to occur through changes in weather.

Climate models indicate that climate conditions currently associated with prairies, rather than forests, will dominate the region by the end of the 21st century, making it inhospitable for regrowth of the coniferous forest. Meanwhile, existing trees will continue to provide fuel for large fires for several decades.

Stralberg said the research provides land managers with the opportunity to better understand how landscapes are likely to change in the future and plan for a range of potential outcomes as the effects of climate change evolve.

The study, “Wildfire-Mediated Vegetation Change in Boreal Forests of Alberta, Canada,” was published in Ecosphere.

Alberta’s boreal forest could be dramatically altered by 2100 due to climate change, study shows