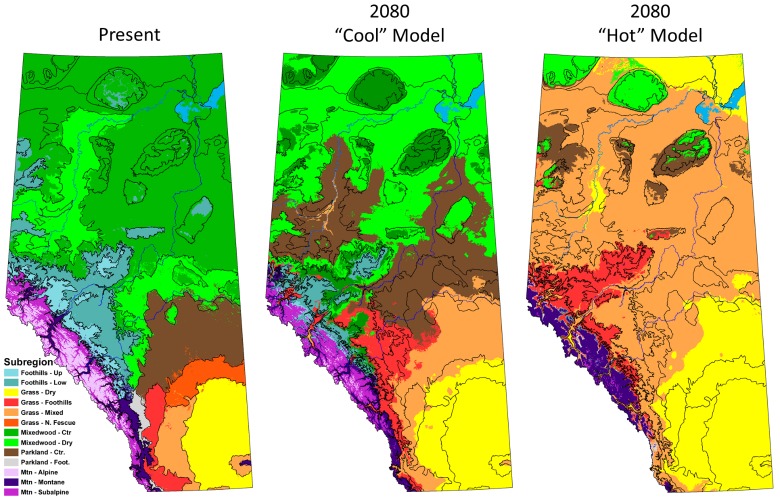 130828-alberta-climate-projections-banner
These sample maps from the ABMI report show the distribution of Alberta’s natural subregions under current climate conditions and under two climate scenarios for the end of the century. The “cool” model predicts an increase of 2.5 C in mean annual temperature; the “hot” model predicts an increase of 6.5 C and significantly drier conditions.

(Edmonton) A new report from an institute at the University of Alberta paints the clearest picture yet of how climate change will reshape the province’s landscape.

The report from the Alberta Biodiversity Monitoring Institute (ABMI) describes how Alberta’s ecosystems are likely to respond to climate change. In Alberta’s Natural Subregions Under a Changing Climate: Past, Present and Future, U of A researcher Richard Schneider presents state-of-the-art climate projections for the province and a detailed analysis of how Alberta’s ecosystems are likely to shift in response to climate change over the next century.

The projections show a range of possible changes to the climate. At a minimum, temperatures in Alberta are expected to increase by 2 C over the next hundred years; all available global climate models predict this outcome. In response, Alberta’s ecosystems are projected to shift northward: for example, the parkland landscape around Edmonton will come to resemble the grassland landscape around Calgary.

At the upper end, under a high global greenhouse gas emissions scenario, the climate models predict drier conditions and temperature increases of up to 6.5 C, which could result in the near-complete loss of the boreal forest from northern Alberta. The boreal region currently covers more than half of the province.

“This report provides state-of-the-art projections of ecosystem transitions for the province, at a level of detail previously unavailable,” says Schneider. “We’ve essentially taken the existing snapshot of Alberta’s ecosystems and created a movie to describe what is likely to change in those living systems as they respond to climate change.”

Alberta’s ecosystems are classified into six natural regions and 21 natural subregions. Because broad climate patterns determine the distribution of these ecosystems—the grassland in the south and the boreal forest in the north—they are likely to respond strongly to climate change. Schneider models the response of these regions to climate change based on their current climate associations and several projections of Alberta’s future climate.

Understanding how Alberta’s natural regions are likely to change in the future is directly relevant to land use planning initiatives, such as forest management, that are linked to the current extent and distribution of these regions. This report is intended to assist in informing decisions about natural resource and land use.

The report was produced as part of the Biodiversity Management and Climate Change Adaptation Project led by ABMI, with collaborators from the U of A and the Miistakis Institute. The project receives its core funding from the Climate Change and Emissions Management Corporation.

“This is a significant report for the CCEMC,” said Eric Newell, chair of the corporation. “It improves our understanding of the implications of climate change for Alberta over time, and continued work will enhance the ability of industries like forestry that rely on Alberta’s ecosystems to plan and prepare for the future.”

Funding for the report was also provided by the NSERC Alberta Chamber of Resources Chair in Integrated Landscape Management at the U of A.