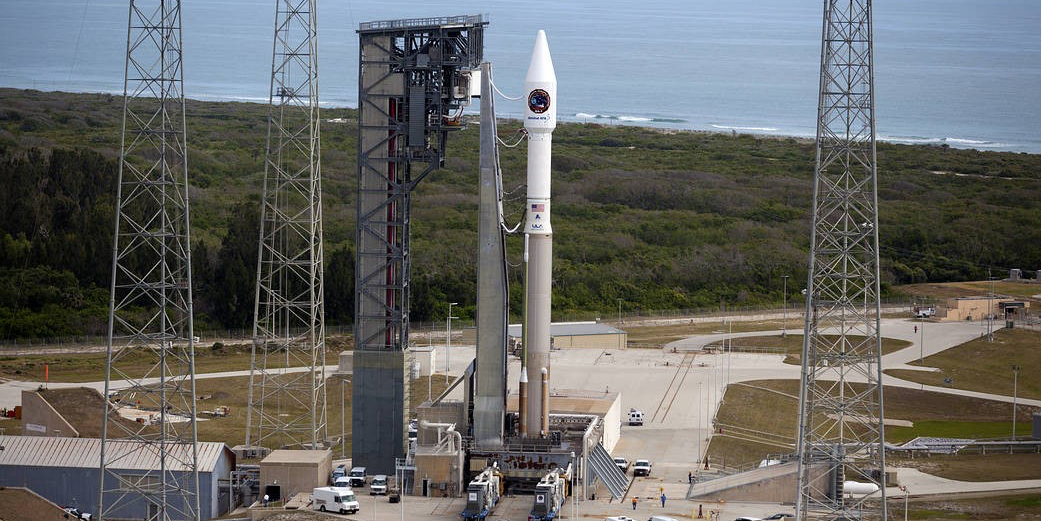 The first ever made-in-Alberta satellite was launched into space earlier today.

Ex-Alta 1, a small cube satellite designed and built by University of Alberta students, was launched aboard a cargo ship headed for the International Space Station April 18. The satellite is part of an international program to monitor space weather.

The launch was a stirring experience for members of the team who travelled to the Kennedy Space Center.

“The gantry rattled and the blast made waves across the water—we could feel it in our bones,” said electrical engineering professor Duncan Elliott. “We were all very excited.”

“It was something—being right there and seeing it just go up,” said graduate student Charles Nokes. “You start seeing smoke and it slowly lifts up and goes off over the ocean. We were really well placed and watched it for several minutes. When it hit the sound barrier, there was this very distinct loud clap—and we felt it. It hit us.”

Back on campus, AlbertaSat members—students, professors and family members—had gathered to watch the launch online.

“The excitement is absolutely palpable,” said space physics professor Ian Mann. “This is an absolutely fantastic achievement for our students, for the University of Alberta. This is the beginning of new opportunities to go even further beyond what we’ve done.”

For Taylor Robertson, who’s working on his master’s degree in electrical engineering, the launch was monumental. As a team member for more than three years, seeing Ex-Alta 1 launched into space was “a huge relief,” he said.

“It’s been close to a year since we packed it up and sent it off, and we all knew that this was the most dangerous part of the mission. It’s the end of a really exciting chapter.”

Robertson joined the team while studying for his undergraduate degree in physics. He would never have dreamed that he could be involved in something like the AlbertaSat group—but he wound up leading the group in charge of the satellite’s attitude control system, which will keep Ex-Alta 1 in a stable flight path, enabling it to collect the data it needs.

“This is something you never expect to do, but I’ve been given a few opportunities to get involved in space-related work at the U of A,” he said, noting his participation in a sounding rocket launching program with the University of Norway and studying space weather with Mann.

“Then when this opportunity came up, I had to look after the control system, which was not really my specialty in any way,” he said. “But I expanded my knowledge and understanding into a realm I never thought I would go to.”

And now, on to the next mission

Newer members of the AlbertaSat group are focusing on the next mission: they’re beginning to work on Ex-Alta 2, a cube satellite that will monitor ground conditions in Alberta and send alerts when conditions are ripe for forest fires.

Travelling to Florida to see the team’s next satellite launch is “definitely my goal,” said Casia McLeod, a second-year mechanical engineering student.

Participating in programs such as AlbertaSat gives students hands-on experience and opens doors, the two said.

“It helps bring interest to my courses,” said McLeod, the team’s administration leader. “It makes me want to learn more in my classes so that I can help my team more.”

From the launch site, Elliott said he’s proud of the U of A students.

“We’ve come so far and learned so much and they came up with innovative solutions to problems and those solutions are being passed for the greater good,” he said. “They’re really excited to see their work get launched into space today.”

Ex-Alta 1 is part of the international QB50 mission, which comprises about 50 cube satellites built at universities around the world. The satellites will be deployed from the space station in several weeks. Working together, they will study the effects of space weather on the Earth’s atmosphere.

Events like powerful solar flares present a poorly understood risk to electronics and our power infrastructure and the project will provide new information about the way space weather interacts with our atmosphere.