I’ve learned that the best teachers tell me things I really don’t want to hear. Their hard truths have allowed me to evolve and, ultimately, to succeed.

Lois Mitchell urges grads to go out of their way to hear the hard truths that hone passion into success. 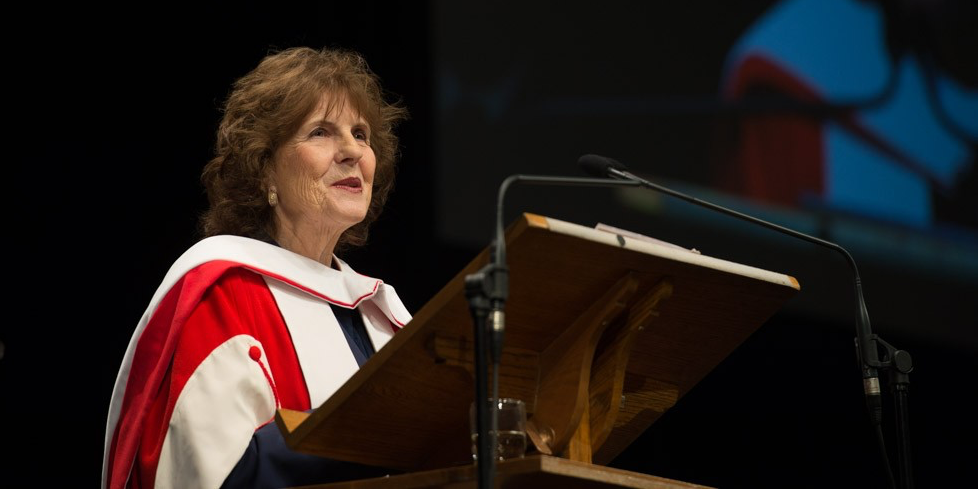 Lois Mitchell had some tough advice for graduands at Tuesday’s convocation. Alberta’s lieutenant governor urged her audience to “seek out the harshest critics you can find, go out of your way to receive tough feedback,” and never take “no” personally. In other words, consider rejection as the path to personal growth.

“I’ve learned that the best teachers tell me things I really don’t want to hear,” she said. “Their hard truths have allowed me to evolve and, ultimately, to succeed.”

Mitchell has had her fair share of success. She started out as an elementary school phys ed teacher, and went on to create a successful merchandising and sports marketing firm and corporate training venture. Her business acumen is matched only by her commitment to community service, including her ardent support of women’s hockey and aspiring Olympians. She’s worked tirelessly for the Hockey Canada Foundation, the Canadian Women’s Hockey League and the Special Olympics Canada Foundation.

Equally passionate about the arts, she has also been heavily involved with the Alberta Foundation for the Arts and National Youth Orchestra, and has been chair of the Calgary Chamber of Commerce and governor of the Canadian Unity Council. She was named Calgary’s Citizen of the Year in 2008 and was appointed a member of the Order of Canada in 2013.

Mitchell began her address by pointing out that she and her husband were married many years ago by the grandfather of U of A President David Turpin. Yesterday, it was Mitchell who installed Turpin as president in her official capacity as lieutenant governor.

“That’s the beauty of human existence,” she said. “We never know where the road will lead, because each choice we make sends out a ripple of new possibilities.”

And though graduating from university is certainly a major landmark in anyone’s learning curve, Mitchell reminded her audience that the curve should never end. One secret to her own success, she admitted, is asking herself, ‘What have I learned?’ at the end of each week. “If the answer is ‘nothing’ then I’m doing something wrong.

“Your time at the U of A has taught you to stretch beyond the limits of what you think you know. Don’t ever stop that process, and always give yourself room to explore and change direction.”

That exploration, she added, means facing down rejection, time and time again. “Rather than giving up, take that ‘no’ as an opportunity to refine your approach and try again. If you really want to speed your progress, go out of your way to receive tough feedback.”

Finally, Mitchell stressed the importance of pursuing a vocation you love and moving through the world with gratitude.

“If you do what you love, it won’t seem like hard work and it won’t feel like taking risks. It will simply be what you were meant to do.

“As you progress in your life and career, you’ll find yourself facing a choice: to follow the status quo or pursue your dreams, however unusual they may be. I can tell you that the rewards you create for yourself and your community by moving beyond what’s expected are well worth the effort.

“Go forth with a compassionate heart, full of gratitude, and you will do great things.”